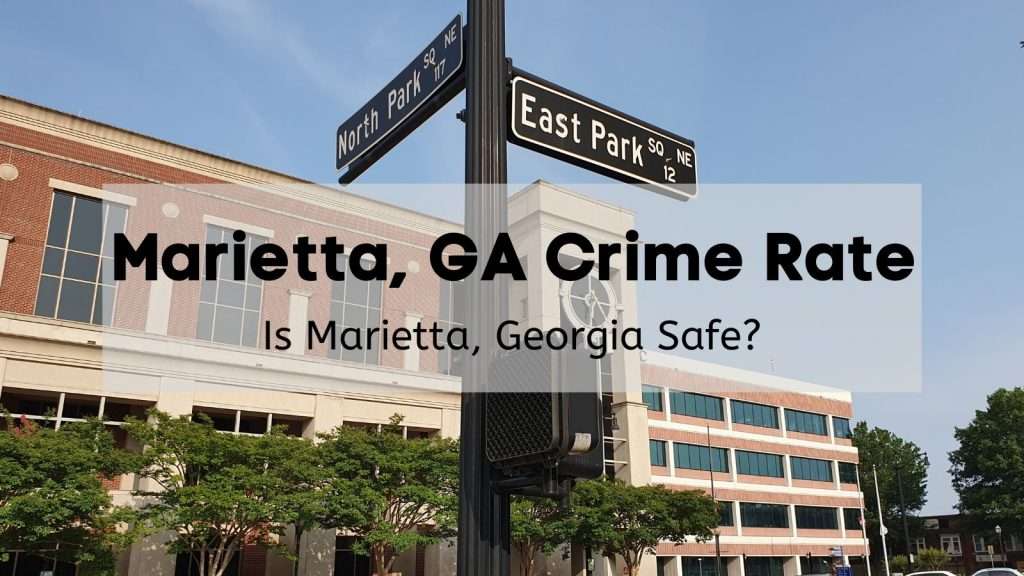 Marietta is a city in and the county seat of Cobb County, Georgia. Founded in 1824, the beautiful city now boasts a population of over 60,000 residents as of the most recent census. With a booming economy, a slew of major employers, beautiful weather, and Atlanta only being 20 miles away, it’s an ideal place to live, work, and raise a family. With a major city only 20 miles away, we understand you’ll want to know about the Marietta crime rate. You’ll find information about the safest neighborhoods in Marietta, as well as the dangerous areas of Marietta that you may want to avoid. Nobody wants to move to a wonderful, new abode only to find out they’ve purchased their family’s forever home in a less than desirable part of town, rich with crime! Marietta doesn’t have a high violent crime rate overall and is generally considered to be one of Georgia’s safer cities to live in with several great neighborhoods.

Understanding the Marietta Crime Rate – How Crime Rates Are Calculated

We want our customers to know where the crime data comes from and how the rates are calculated. Most rates are based on FBI collected and analyzed crime data. The FBI collects the data from all the local law enforcement agencies in the country. From there, analysts break the data down into multiple categories. Non-violent crimes are frequently categorized as property crimes. Please understand that crime rates don’t always accurately depict crime in a city. Rates can vary, change, and evolve annually for a variety of reasons:

Because of all these reasons, and likely more, the FBI very publicly discourages using crime rates and statistics to compare cities, metro areas, and states.

Crime rates are a useful tool to understand how safe a city is as a whole, but it’s not the sole way you should determine whether or not relocating to, or within, a city is right for you, your family, or your business. While it may be a good starting point, you really need to dig deeper once you’ve settled on a city to move to. With that in mind, let’s take a look at Marietta, GA’s crime rates.

What Is the Marietta, GA Crime Rate?

The crime rate in Marietta is 3,428 per 100,000 people, which is about 46% higher than the US average of ​​2,346 crimes per 100,000 people. Over 80% of the crimes reported in Marietta come from neighborhoods that would classify as urban, while the suburbanite housing developments that stretch out all around the city are extremely safe with very little reported crime. The Georgia Bureau of Investigation indicates Marietta crime statistics makes it safer than many of the cities in Georgia as the city tends to be about 15% lower in crime rate than most of the state.

Crime maps are used for assessing crime by neighborhood to see crime hot spots, the type of offenses by neighborhood, and help the general public be aware of the safe areas and the dangerous areas in a given city. You can compare and contrast the public sites like City-Data, Neighborhood Scout, and Crime Grade to get a good idea of what neighborhoods are safest and what are most dangerous. Don’t be afraid to look at local police crime reports either. Reviewing Marietta police reports can offer greater insight into crime in Marietta.

To some, it would appear that violent crime in Marietta is on the rise. That’s not necessarily true. While crimes committed are certainly on the rise, it’s because the population is on the rise. More people means more crime, there is no way around that. BUT – the Marietta crime rate statistics show the percentage of crime is going down. Where there used to be nearly 10 violent crimes per 1000 people, there are now only 5. Your odds of becoming a victim of a violent crime in Marietta are actually improving favorably with every passing year – you’ll be less likely to experience crime next year than this year and you’re less likely this year than you would have been last year.

These numbers rank 20.5% below the rest of the state!

Not unlike violent crimes, property crime numbers are higher each year but that’s simply because the amount of people living in Marietta continues to grow. The percentage of property crime has stopped increasing, though it remains about 40% higher than the state average. You’re no more likely to experience a property crime now than you were a few years ago and as the local police department continues to grow to meet the demanding needs of a growing community, these numbers will continue to drop. The most common property crimes appear to be vandalism – mostly from kids and young adults.

It won’t surprise you that the worst crime neighborhoods in Marietta all fall within the “downtown” areas. The more centralized, the more crime. The more suburban, the less crime. Nearly all of the middle to upper class neighborhoods are borderline crime free, and the crimes that DO occur in these areas are nearly all property crimes.

Marietta Neighborhoods to Avoid Living In

The best neighborhoods to live in are almost all outside the reaches of downtown. The outer reaches of the city are all housing developments of varying cost, but nearly all of them are middle to upper class specific. In these neighborhoods, you can rest easy knowing you, your children, and your property are well protected.

Best Marietta Neighborhoods to Live In

Marietta Safety Tips – How to Avoid Crime in Marietta, GA

Having provided services to hundreds of customers in the community, we know there are three separate things every family should do to avoid crime in Marietta:

We’ve already alluded to the fact that the police department is growing to meet the demands of a booming population; there are 132 sworn officers. Recently, they built their own web page attached to the city website. The department consists of three separate divisions, each have a number of sub-divisions:

As the police force is growing, Interim Chief of Police Martin “Marty” Ferrell is overseeing the build and development of the force. He and the team have made it a point to make police logs available on the website.

Marietta, GA is a growing city with plenty of challenges – but it gets safer every single day.

Where are the Safest Marietta, GA Neighborhoods?

The further you get away from downtown, the safer the city is. Outskirts are filled with wonderful and safe neighborhoods.

Where Can I View Marietta, GA Police Reports?

Right on the police webpage!
At Wirks Moving and Storage, we know how important it is to make sure your family and business are going to be safe in a new neighborhood. We know it’s one thing to safely move your personal belongings and your property, but it’s another thing to make sure they’re going to be safe in their new home. Once you’ve decided where in Marietta is best for you and your family, give us a call at (404) 635-6683!  We’ll be happy to help you relocate into your new, safe community. Or, fill out our online form to get a free quote to have Wirks Moving and Storage help you move into your new, safe Marietta, GA neighborhood.