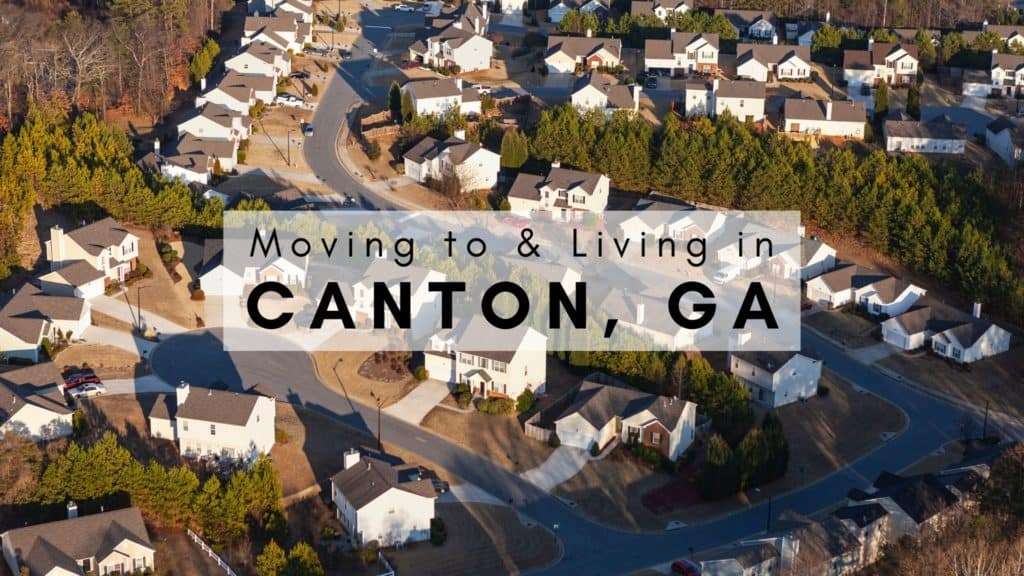 Located about 41 miles north of Atlanta, the city of Canton, GA keeps residents far enough away from the hustle and bustle of the big city while still making it easily accessible when needed. The area is surrounded by other great cities such as Holly Springs, Buffington, and Waleska.

Over the years, Canton has become known for its dedication to growth and forward-thinking. It has even been recognized by Georgia Trend Magazine as a “LIVE, WORK, PLAY” Community because of the city’s focus on the future.

As more people are moving to Canton, it’s easy to see why. Accepted as such a great place to call home, you’ll love learning interesting facts about the area and other details about living in Canton, GA!

While Canton is still a small city with a current population of 25,806 residents, this number is more than four times what it was at the turn of the century in 2000. As this growth has taken place, the median age of 33 years old has gotten lower since more young families have been relocating to Canton.

Local Canton demographics show the city’s population is made up of about 56% Caucasian, 17% Hispanic or Latino, 12% Black or African American, and 2% Asian. The gender ratio in Canton consists of 53.11% female and 46.89% male.

2. Fun Things to Do in Canton

Once you’re a resident of Canton, you’ll be happy to know there are plenty of exciting activities around town. Spanning a large 58-acre space, the Etowah River Park is one of the best things to do in Canton thanks to its fun playgrounds, walking trails, open land, and picnic tables. You can paddle down the Etowah River in a canoe, enjoy a family picnic, or simply read a book while enjoying a beautiful day.

If you’re looking for exciting things to do in Canton that are indoors, then Cherokee Lanes should be one of your first stops. This popular Canton attraction has everything from bowling and laser tag to a large arcade. Celebrate a birthday party or join up with one of the bowling leagues to take part in seasonal tournaments. 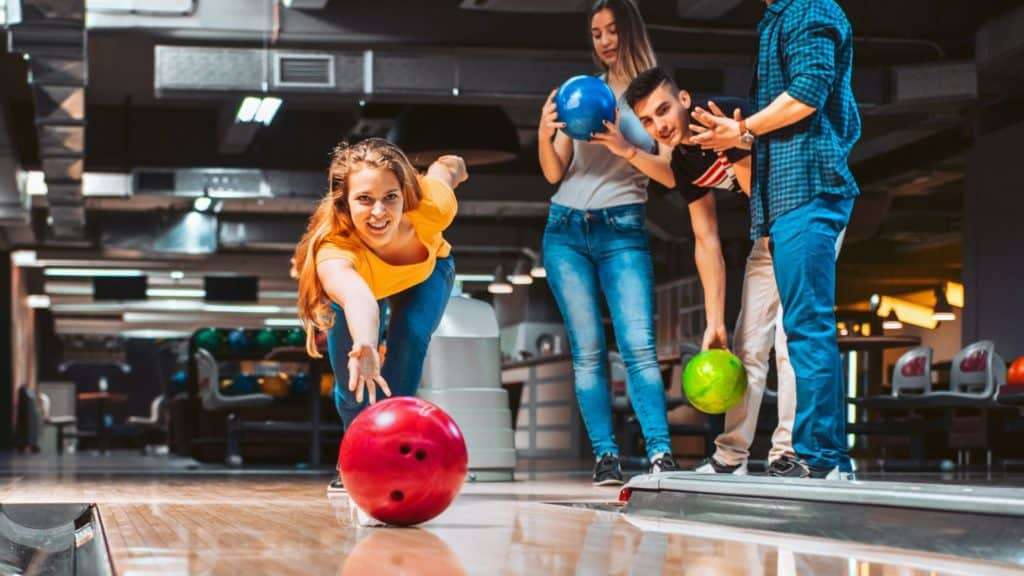 City residents are lucky enough to have a wide variety of amazing restaurants in Canton they can choose from. Among the most popular options in town is Williamson Bros. Bar-B-Q, which is a meat lover’s paradise serving ribs, brisket, pulled pork, full platters, BBQ sandwiches, and even their own brand of BBQ sauces. Their rustic style is very inviting and will have you coming back for seconds and thirds.

If you’re looking for a different option, La Parrilla Mexican Restaurant is yet another one of the top places to eat in Canton. You can create your own combos with your choice of tacos, burritos, enchiladas, and more. Make sure you try one of their famous Parrilla Bowls and wash it down with a delicious margarita.

A post shared by La Parrilla Mexican Restaurant (@laparrillamexicanrestaurant) on Jun 23, 2020 at 7:30am PDT

While you’ll need to be aware of all of your budget items after relocating to Canton, the main impacts in this area come from the larger expenses of local housing and city transportation. Taking these and other factors into account, the cost of living in Canton is about 11% higher than the U.S. average and 18% higher than average in the state of Georgia.

With about 50% of Canton residents being homeowners, there’s a pretty even split between them and renters. If you’re planning to purchase a house, the average price of a home in Canton has gone up about 12% in the past year, reaching around $294,000. Canton, GA homes for sale include small properties around $200,000 as well as a few large estates reaching prices around $1.5 million.

If you’re part of the other 50% moving to Canton who expects they’ll be leasing, you will find one-bedroom locations around $1,079 per month and two-bedroom places around $1,191 per month. Overall, the average price of rent in Canton is about $1,187, which is a 5.39% increase since last year.

Constantly ranked among the safest cities in Georgia, it’s not difficult to find a great place to live around Canton. The area covers about 19 square miles and offers many great communities to choose from in each corner of town. Locals enjoy convenient amenities, a sense of security, and areas that are easily walkable. 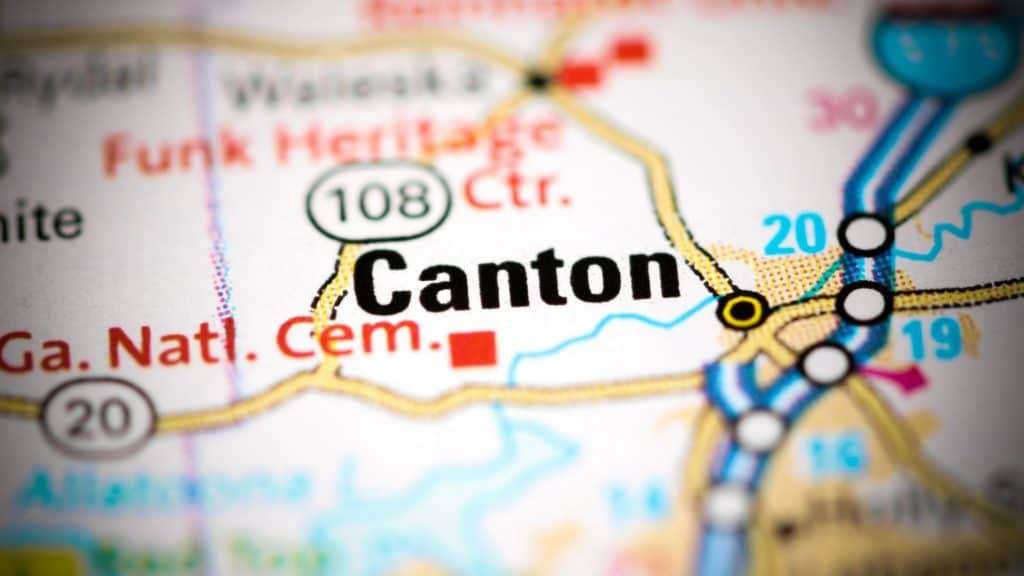 Some of the safest Canton neighborhoods include:

It’s easy to come by convenient shopping destinations in Canton with a list that offers nearby options like the Riverstone Plaza, Walgreens, Kirkland’s, Target, the Canton Marketplace, Goodwill, and Kohls.

Located right in the center of the Cherokee County School District, parents will be pleased to hear that Canton is home to a strong education program for their children. Anyone moving to Canton with kids will be joining a community that houses about 5,088 students between the ages of 5 and 17 years old.

The main local schools in Canton include:

You won’t find any secondary schools within Canton. But the nearest college is Reinhardt University, only 8 miles northwest in Waleska.

Although the median household income in Canton of $54,470 is slightly lower than the national average, the area has a strong job market with plenty of opportunities. The most common industries include sales, business management, local restaurants, as well as the film industry.

A few of the largest employers offering jobs in Canton are:

Many residents living in the area choose to commute from Canton to Marietta, GA as well as various other communities nearby.

Filled with Canton outdoor activities at places like Boling Park, Brown Park, and the Historic Downtown Canton Cannon Park, you’ll have plenty of local where you can enjoy the lush green trees and gorgeous weather in Canton. 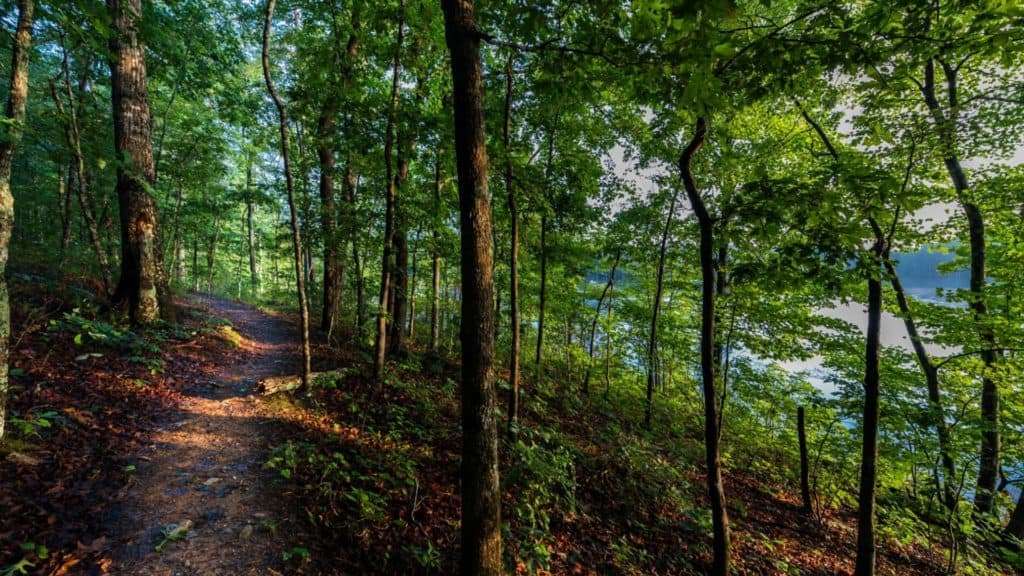 During the year, you can expect about 52 inches of rain on average. Canton weather during the summer can be warm and muggy with temperatures between the high 60s and upper 80s. Winters cool down significantly between the low 30s and low 50s.

Tips for Moving to Canton, GA

Are you preparing for living in Canton soon? We have a team of incredible Canton movers who are ready to help with your transition. Contact Wirks Moving today at (404) 635-6683 or fill out the Request a Quote form above for a free moving estimate!