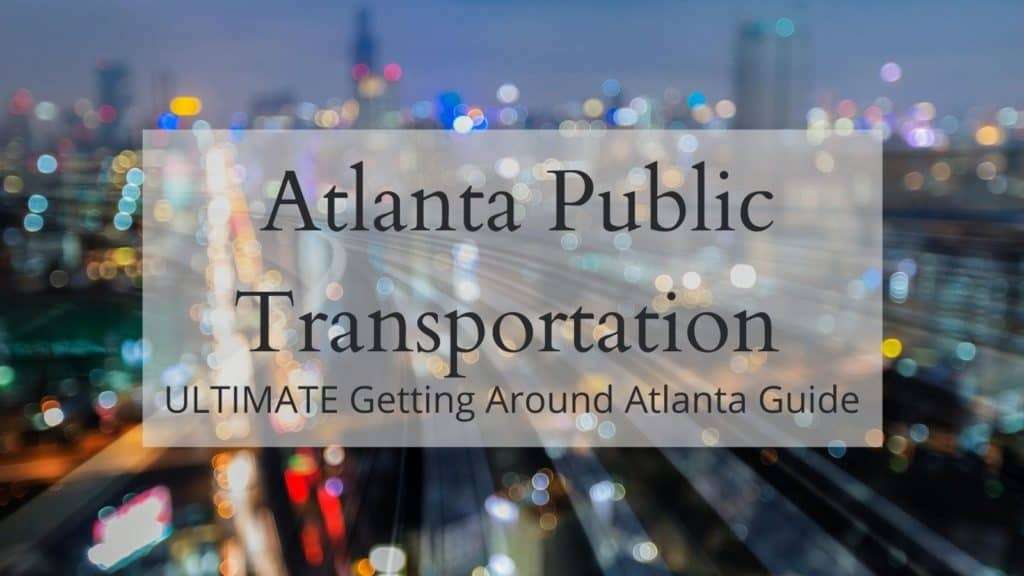 One of the most important elements in making a city livable and affordable is a robust public transit system. Thankfully, Atlanta has an affordable and extensive public transit system including light rail, bus, and streetcar options that make getting around Atlanta easy and straightforward. The Atlanta public transportation system recently ranked as the 15th best in the United States ahead of cities like Dallas and there are more than 134 million annual rides per year on MARTA alone! Ready to find out how to get around Atlanta without a car as a tourist or new resident? Here’s a complete guide to the city’s transit system.

How to Get Around in Atlanta by Train | MARTA

Need to commute downtown or to Midtown for work? One of the most efficient forms of public transportation in Atlanta, GA is the rapid rail system. The MARTA rail system has almost 48 miles of tracks and 38 rail stations with four service lines. More than 231,000 people ride the Atlanta train system every day which makes it the biggest Atlanta public transit system by daily ridership.

Rides on the MARTA rail system are $2.50 one way with up to 4 free transfers included. You can transfer to MARTA bus or train lines or bus lines with GRTA Xpress, CobbLinc, & GCT.

There are 38 MARTA stations throughout Atlanta on four lines:

Trains run about every 20 minutes and all four lines have a nexus at the Five Points Station downtown.

Getting Around Atlanta by Bus | MARTA, GRTA Xpress, CobbLinc, & GCT

The most extensive form of public transportation in Atlanta is the bus system which makes it easy to get almost anywhere in Metro Atlanta. The primary bus transit provider is MARTAwhich has 100 bus lines and more than 199,000 daily weekday riders. MARTA mostly operates in Fulton, DeKalb, and Clayton counties and it has a separate paratransit service called Mobility — an Atlanta public transit option for seniors and disabled riders.

There are three other primary fixed-route bus providers in Atlanta:

MARTA bus fares are $2.50 for a one-way trip with 4 free transfers allowed within 3 hours. You can transfer to MARTA rail or bus, GCT, CobbLinc, or GRTA Xpress. There’s a reduced rate for Atlanta public transportation for seniors and disabled riders who pay just $1. Riders who qualify for the MARTA Mobility service pay just $4.

If you’re visiting Atlanta for several days or you’re relocating to Atlanta, you can save money on fares with a MARTA Pass:

The most convenient option for paying for Atlanta mass transit transportation by bus and train is the Breeze card. The Breeze card was developed by MARTA but it’s also used by MARTA, GRTA Xpress, CobbLinc, and GCT.

Want to know how to get around Atlanta by bus? There are almost 150 bus routes in Metro Atlanta!

MARTA operates 110 bus lines in Atlanta over 1,000 route miles. There are 5 park and ride lots serviced only by bus lines plus many free parking lots at MARTA rail stations. Bus times vary by route. You can see all MARTA bus routes here with a map of the MARTA bus system.

GRTA partners with 12 metro Atlanta counties to operate the Xpress regional commuter bus system. It’s one of the most popular forms of public transportation in Atlanta with service hours during weekdays. There are 25 GRTA Xpress routes including Acworth to Downtown, Canton/Woodstock to Downtown, and Stockbridge to Downtown and Midtown. See all GRTA Xpress routes here.

Gwinnett County Transit (GCT) operates express bus and local bus service in Gwinnett County with routes to and from Midtown and Downtown Atlanta. About 5,000 people ride GCT buses every day. There are 7 local bus routes and 5 express routes. See all GCT routes here.

The standard fare for the Atlanta Streetcar is just $1. No transfers to MARTA rail or bus are allowed and kids under 46″ ride free. Day passes with unlimited rides are only $3.

The Atlanta Streetcar is one of the best ways to get around downtown Atlanta. It runs from Centennial Olympic Park along Auburn and Edgewood to the King Center with a stop at the MARTA Peachtree Center Station.

There are a handful of free shuttle services in Atlanta. Three only serve college campuses but two provide service to popular destinations.

The buc through Livable Buckhead is a free shuttle that connects Buckhead destinations in Atlanta to nearby restaurants, hotels, shopping centers, and the Lenox and Buckhead MARTA stations. Many popular highrises in Buckhead, Atlanta are served by the free shuttles. During morning and evening commute hours, the Piedmont-Lenox Line shuttle stops every 10 minutes. The Lenox Park Line stops every 8 to 20 minutes. You can see the full buc shuttle schedule here.

The Atlantic Station Shuttle or FREE RIDE offers free shuttle service between Atlanta’s Atlantic Station and the Arts Center MARTA Station. The shuttle runs every 10-15 minutes and it has several stops in the 30363 neighborhood.

Getting Around Atlanta by Car | Major Highways in Atlanta

I-20 runs west to east across Atlanta with I-75 running southeast to northwest and I-85 running southwest to northeast. I-75 and I-85 meet at the Downtown Connector, one of the top 10 most congested areas of interstate highway in America.

Just be prepared for Atlanta’s notorious traffic which is only expected to get worse with 2 million new residents expected over the next two decades. According to a recent study, Atlanta ranked 8th in the world for worst traffic.

When possible, it really pays to use public transportation in Atlanta, GA to avoid the congested freeways.

How do I get from Atlanta airport to downtown Atlanta?

You can take the MARTA rail line from the west end of the Atlanta airport in the domestic terminal to downtown. The trip takes about 20 minutes.

What public transportation is in Atlanta?

Atlanta public transit options include a light rail system with 38 stations, over 140 bus routes on MARTA and three other bus operators, and a streetcar serving downtown Atlanta.

How much is a monthly MARTA pass in Atlanta?

A 30-day MARTA pass is $95. Discount passes through the University Pass Program are $68.50 for students and $83.80 for faculty. There is no reduced fare for monthly passes for seniors and disabled riders.

Whether you’re using public transportation in Atlanta, GA as a tourist or you’re learning how to get around Atlanta as a new resident, you’ll find the Atlanta public transit system is very robust if a bit frustrating and slow. Are you still in the planning stages of a move to Atlanta or surrounding Atlanta suburbs? Call the award-winning Atlanta movers at Wirks Moving & Storage today or fill out a Request a Quote form to get a free moving estimate for your upcoming relocation.