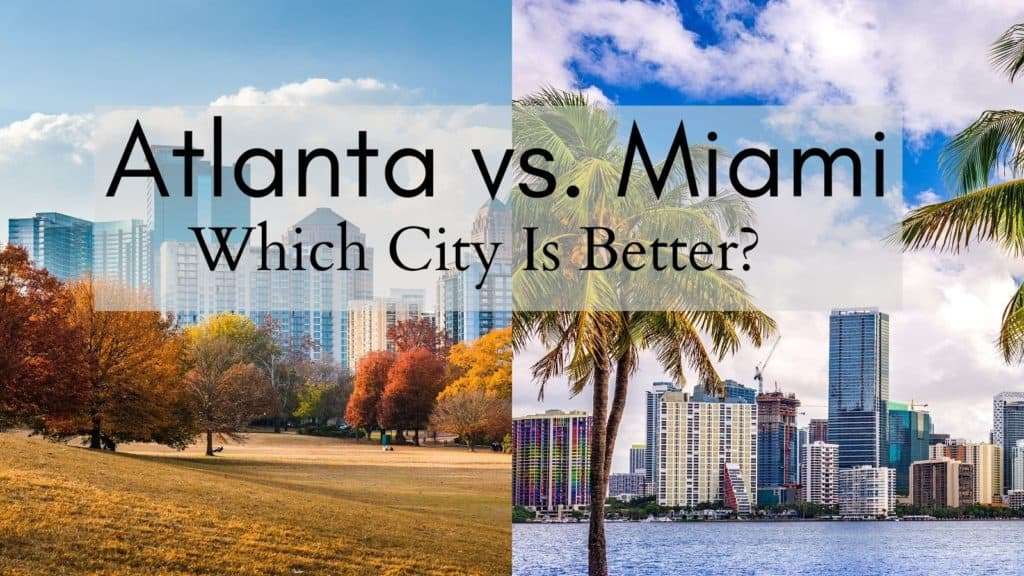 Miami and Atlanta are both amazing cities in the South with their own culture, history, and charm. They’re also two of the largest metro areas on the East Coast with tons to offer millennials, singles, professionals, and families. Do you crave a city with a fun nightlife and something always on the horizon? Do you want a comfortable and affordable place to settle down with lots of amenities?

Here’s an in-depth comparison of Atlanta versus Miami complete with a cost of living comparison and important benefits and drawbacks to consider.

Pros & Cons of Living in Atlanta vs. Miami

Atlanta and Miami have so much to offer, but which is best for the lifestyle you want? Whether you’re after attractions, nightlife, jobs, or family-friendly neighborhoods, here’s how to find it with a list of Atlanta vs. Miami pros and cons.

Atlanta Has a Great Jobs Market

While job growth has slowed across the United States since 2018, that’s not true in Atlanta. One of the pluses of living in Atlanta is a strong and growing economy with a diverse number of industries. Atlanta is home to several Fortune 500 companies like Delta Airlines, UPS, and Home Depot with plenty of opportunities in retail, manufacturing, tourism, and more. Atlanta’s economy has been outpacing the national average for years with no sign of slowing down.

When you compare Atlanta versus Miami, you’ll notice Miami has a tighter job market. To get into a new career, you’ll likely require more training than you would in other cities to compete. Miami is also dominated by the tourism industry with more limited job options.

There Are Tons of Amazing Atlanta Neighborhoods with Character

One of the great perks of living in Atlanta is its range of charming and exciting neighborhoods. Atlanta is home to several historic districts and neighborhoods within walking distance of top attractions, dining, and shopping. Midtown is one of the most desirable neighborhoods. The arts district of Atlanta, it boasts historic buildings, theaters, and museums with luxury high-rises and a strong sense of community. Morningside offers more outdoor recreation with great walkability, parks, a farmer’s market, and community garden. 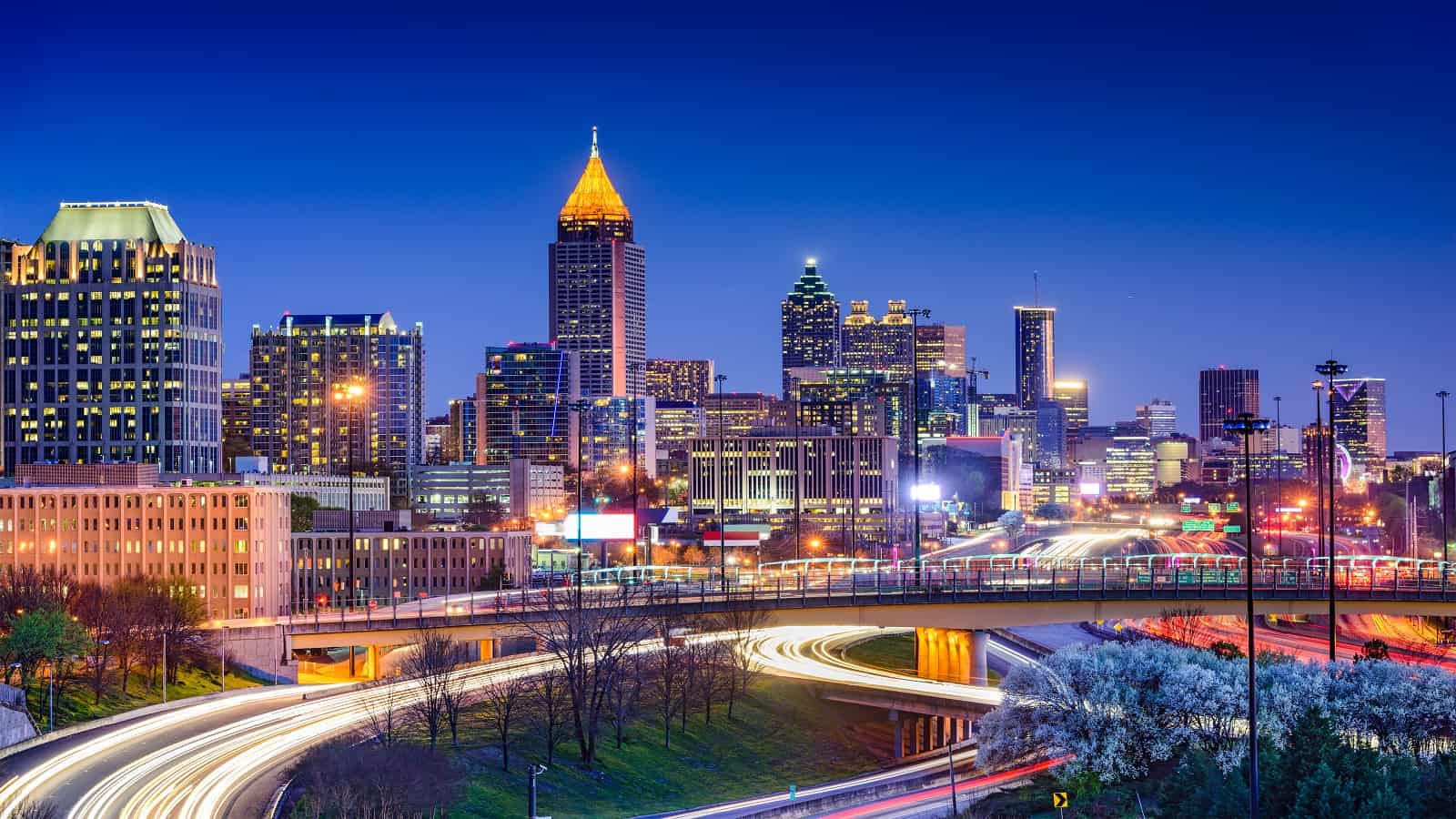 While Miami also has great neighborhoods to explore and its own historic district, it can’t quite compare to the diversity, excitement, history, and urban lifestyle that Atlanta delivers.

Atlanta Is Family-Friendly with Tons of Attractions

One of the benefits of living in Atlanta is the city’s amazing parks. Centennial Olympic Park, located in downtown Atlanta next to the Georgia Aquarium, is the centerpiece of the city’s entertainment district. There’s playgrounds, a garden, the Quilt Plaza, and the iconic Fountain of Rings. Piedmont Park, another picturesque urban park in Atlanta, is located outside of downtown and close to Midtown. The park has a community garden, playgrounds, dog parks, a pool and aquatics center, and sports fields.

If that isn’t enough, Atlanta is also home to other fun attractions that make it a great place to live. Spend a day with the kids at the Children’s Museum of Atlanta, Zoo Atlanta, or the Georgia Aquarium. You can also enjoy the beautiful outdoors at the Atlanta Botanical Garden or explore civil rights landmarks like the Martin Luther King, Jr. National Historical Park.

The biggest drawback of living in Atlanta? Urban sprawl combined with poor public transportation. Atlanta isn’t a very walkable city aside from some neighborhoods. You’ll definitely need a car while living in the city as Atlanta public transportation isn’t the best. MARTA does not reach a lot of the metro area and stations are very spread out. With a metro area that expands 50 miles in every direction and encompasses over 8,000 square miles, it’s no surprise that Atlanta is generally ranked as having the worst traffic in the U.S.

That isn’t to say Miami fares much better. When you compare Atlanta vs. Miami public transportation, you’ll find Miami is little better, although it has a combination of the Metrobus, Metromover, Metrorail, and trolleys that give it a high score for accessibility.

If there’s one thing Miami is known for, it’s its nightlife. Miami’s South Beach is a mecca for late-night partiers with dance clubs, megaclubs, cocktail lounges, dive bars, and more. Miami boasts a diverse nightlife scene with something for everyone. Want to party until the sun comes up on the beach? Hit the most hopping rooftop bars? Go salsa dancing? One of the biggest advantages of living in Miami is you can do it all, every night if you want! 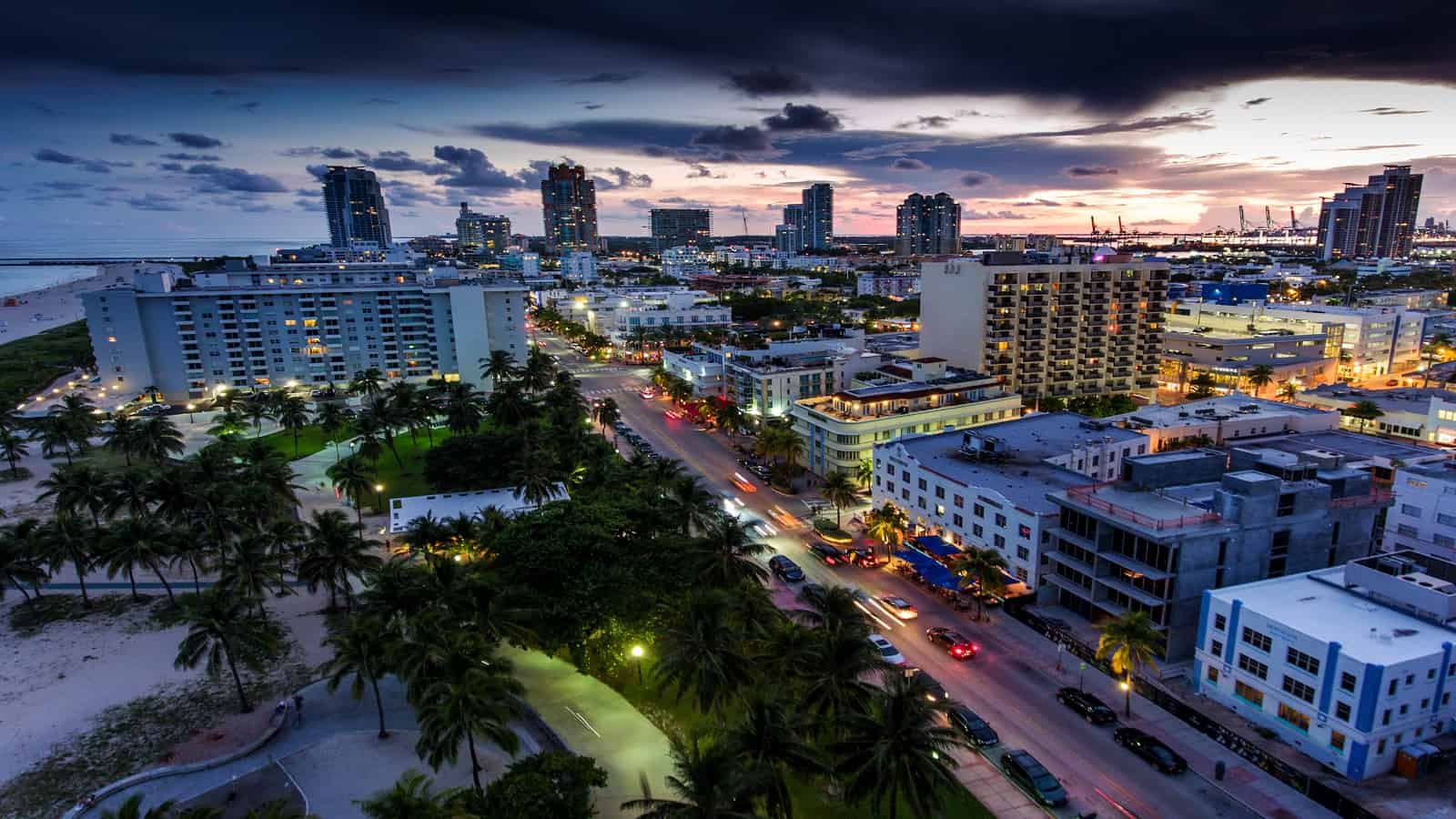 Miami’s known for its award-winning Cuban food and you’ll certainly fall in love with it. That’s not all the city has to offer, though! One of the perks of living in Miami is its amazing international cuisine. You’ll see a lot of Caribbean and Latin American influences in the Miami culinary scene but there’s a lot more to discover like Hutong, an upscale Hong Kong-style restaurant, and Osaka with its Peruvian Japanese fusion. Enjoy fresh seafood at the waterfront, grab sushi, or meet up with friends for Spanish tapas.

Hurricanes Are a Big Drawback of Living in Miami

Living in Miami has its ups and downs but none are so great as the risk of hurricanes. Miami is one of the top U.S. cities for hurricanes with a 16% chance of a hurricane in any given year. Miami is also mostly unprotected from hurricanes with homes at risk of storm surges and high winds. When you look at Atlanta in comparison to Miami, don’t forget to consider this very real threat.

A major con of living in Miami to consider is the city’s high crime rate. Miami has one of America’s highest crime rates with a 1 in 24 chance of becoming a victim of crime. Crime in Miami is 62% above the national average with violent crime 65% over the national average. Miami was once the murder capital of the U.S. and, while it has made strides in lowering the crime rate, it remains a dangerous city, especially in tourist areas like South Beach and Miami Beach.

Cost of Living in Atlanta versus Miami

What is the cost of living in Atlanta compared to Miami? According to Numbeo, you would need $5,636 in Miami for the same quality of living you’d get for $5,100 in Atlanta. Atlanta is far more affordable than Miami, especially when it comes to rent and food.
Here’s how it breaks down:

One of the biggest factors you’ll want to consider when deciding where to live is housing costs. At first glance, the two cities don’t seem far apart. The median home value in Miami is $350,000 compared to $302,000 in Atlanta. However, Miami has a median household income of just $41,800 compared to $65,000 in Atlanta. A perk of living in Atlanta is you can earn more while enjoying a lower cost of living.

The Population of Atlanta vs. Miami

Miami and Atlanta are fairly similar in terms of population. Atlanta is home to 498,000 people compared to 471,000 in Miami. The Greater Miami Area is home to 6.2 million people and stretches 120 miles north to south covering 6,137 square miles. Metro Atlanta is just behind Miami with 6 million residents over 8,376 square miles. 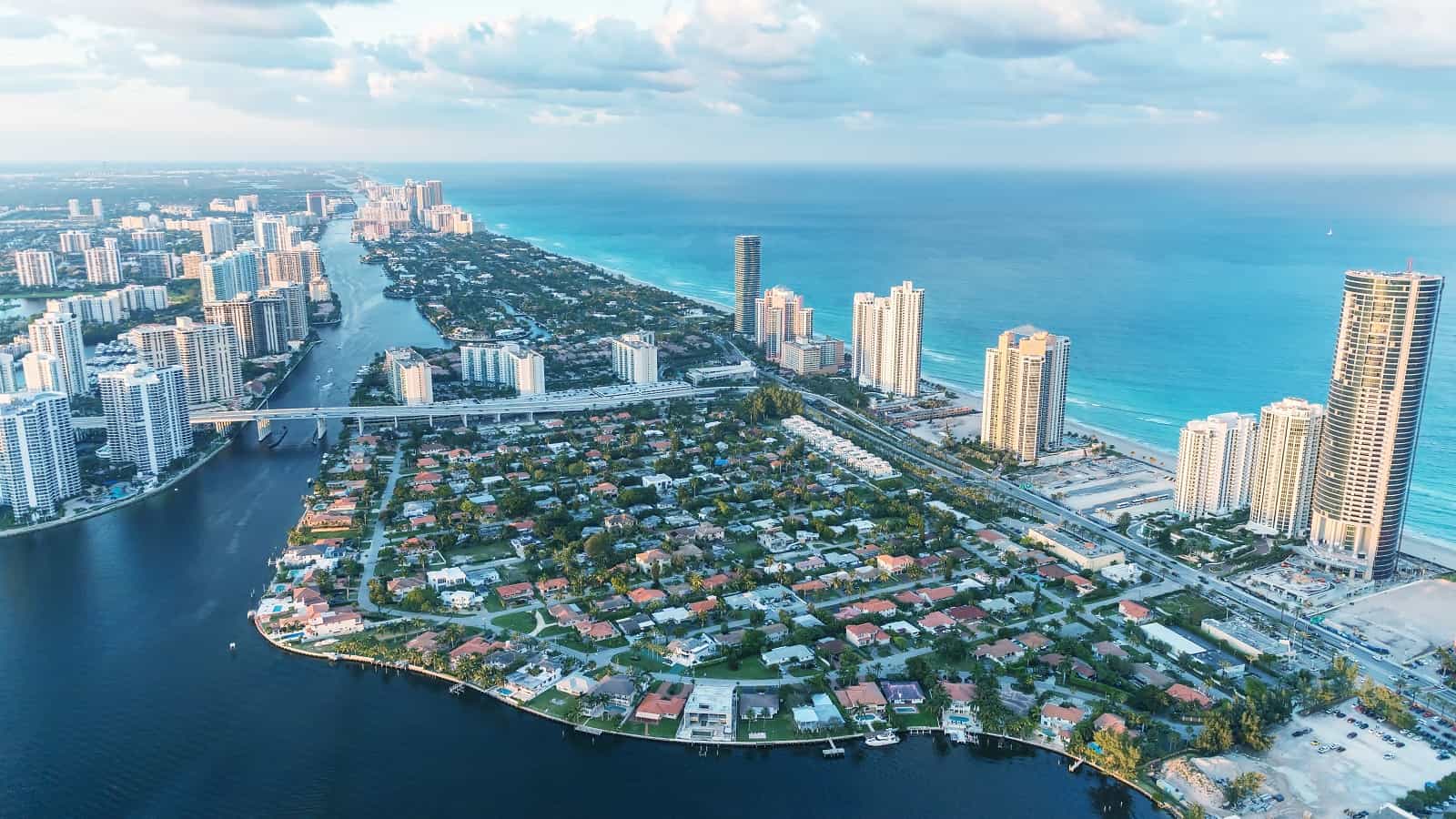 Crime in Atlanta Versus Miami

Both Atlanta and Miami are considered fairly high-crime cities. The crime rate in Atlanta is a bit higher than Miami, however, Atlanta has many safe neighborhoods. In Miami, many of the areas you’ll want to frequent including South Beach are the most dangerous.

Atlanta’s high-crime areas are mostly neighborhoods, particularly southwest of the I-85 and I-20 interchange. About 80% of the crime in Atlanta is gang-related and easy to avoid by staying away from these neighborhoods. Midtown, the east side, and most of the suburbs are considered very safe.

Traffic is one of the biggest complaints among people in both Atlanta and Miami. However, this is one big area where Atlanta loses when you compare Atlanta versus Miami. Atlanta recently ranked 10th for worst traffic in the U.S. On average, drivers in Atlanta lose 82 hours per year to congestion at a cost of $1,214. Miami isn’t much better, coming in 12th with 81 hours lost every year.

Sports in Atlanta Versus Miami

Miami and Atlanta are both big sports cities. Which team will you be rooting for after your move? Atlanta is home to the Atlanta Falcons (NFL), Atlanta Braves (MLB), the Atlanta Hawks (NBA), and Atlanta United FC (MLS). The Atlanta Braves have earned 3 titles and set an unprecedented run of 14 straight divisional championships until 2005. Miami, meanwhile, is home to the Miami Dolphins (NFL), Miami Heat (NBA), Miami Marlins (MLB), and the Florida Panthers (NHL). Miami also hosts professional car races, including NASCAR national races.

How far is it from Atlanta to Miami? If you want to enjoy everything Miami, Florida has to offer while living in Atlanta, the drive from Atlanta, GA to Miami, FL is 663 miles or 9 hours and 45 minutes.

Atlanta versus Miami: Where Are You Going to Live?

These two Southern cities both have so much to offer but you can only choose one as your home. Which sounds better: the culture, attractions, and great neighborhoods of Atlanta or the excitement and amazing cuisine of Miami?

If you have settled on beautiful Atlanta, Georgia, call the award-winning movers at Wirks Moving & Storage today for a free moving quote. We’ll help you relocate to Atlanta without the stress!