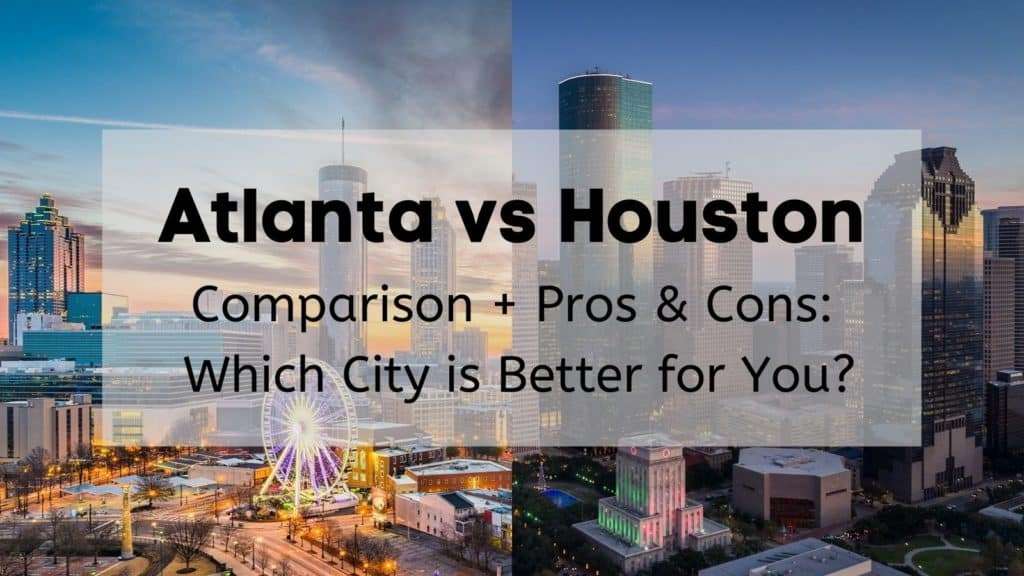 Are you trying to decide between moving to Houston vs Atlanta? Houston and Atlanta both offer a warm climate, thriving (and huge!) metro area, and excellent job opportunities and recreation. They’re also both affordable for large cities.

Atlanta is the City in the Forest thanks to its beautiful green space and mature trees and it’s known for its nightlife and history. By comparison, Houston is the Bayou City and the Space City and famous for its energy and aerospace industry. Choosing between the two may come down to what you’re looking for in terms of a career, nightlife, and entertainment.

This guide to the pros and cons of living in Atlanta versus Houston covers everything you want to know to make your choice between the two cities.

Pros & Cons of Living in Atlanta vs Houston

How do you choose between H-Town and A-Town? This guide to the biggest benefits and drawbacks of living in Houston versus Atlanta can help you decide!

Atlanta has tons of unique neighborhoods to explore

When you compare and contrast Atlanta vs Houston, you’ll find Atlanta’s neighborhoods are more unique and each have their own vibe, much like smaller cities. Downtown Atlanta is incredibly walkable and well-served by public transportation with an exciting nightlife. Midtown is Atlanta’s art district with high-rises, historic buildings, and tons of highly rated museums and theaters. In Morningside, you’ll find a walkable and close-knit community with a farmer’s market and lots of parks.

Atlanta’s nightlife is famous and part of the reason Atlanta is one of the best cities for millennials and Gen Xers.

Atlanta is surrounded by outdoor recreation and exciting destinations

Atlanta’s BeltLine project is creating a huge network of multi-use trails connecting dozens of neighborhoods and the city boasts some of the most beautiful urban parks in the country. The picturesque Piedmont Park by Midtown and downtown features dog parks, sports fields, an aquatics center, and a large community garden. Downtown’s Centennial Olympic Park is the city’s crown jewel and in the center of the entertainment district.

Another advantage of living in Atlanta is you’ll find plenty to do and cities to visit within a short drive. Just north of Atlanta is the Chattahoochee River National Recreation Area with scenic terrain along a 48-mile chain of riverfront parks for boating, fishing, paddling, river rafting, and hiking. Within just one to two hours, you’ll find mountain climbing in Chattanooga, waterfalls in Toccoa Falls, canyon hikes in Georgia, and cultural attractions in Birmingham. You can be in the Blue Ridge Mountains within an hour or on the beach within four hours from downtown Atlanta!

By comparison, the Houston area is very flat and there aren’t many places you can easily drive to. Houston is simply surrounded by more Texas! A negative of living in Houston is it takes more than two hours to drive to the next major metro area, Austin, or three or more hours to get to San Antonio or Dallas.

Atlanta has a stronger and more diverse economy

Atlanta has the country’s highest concentration of Fortune 500 companies and it’s one of the world’s largest economies. It recently reached an all-time low for unemployment which is lower than Houston’s. Atlanta’s economy is expected to outpace Houston’s with stronger job growth. A perk of living in Atlanta versus Houston is Atlanta’s more diverse economy. While the Houston economy is diversifying, it may not be fast enough as it’s still dominated by oil and not prepared for an oil bust.

Atlanta summers can be brutal 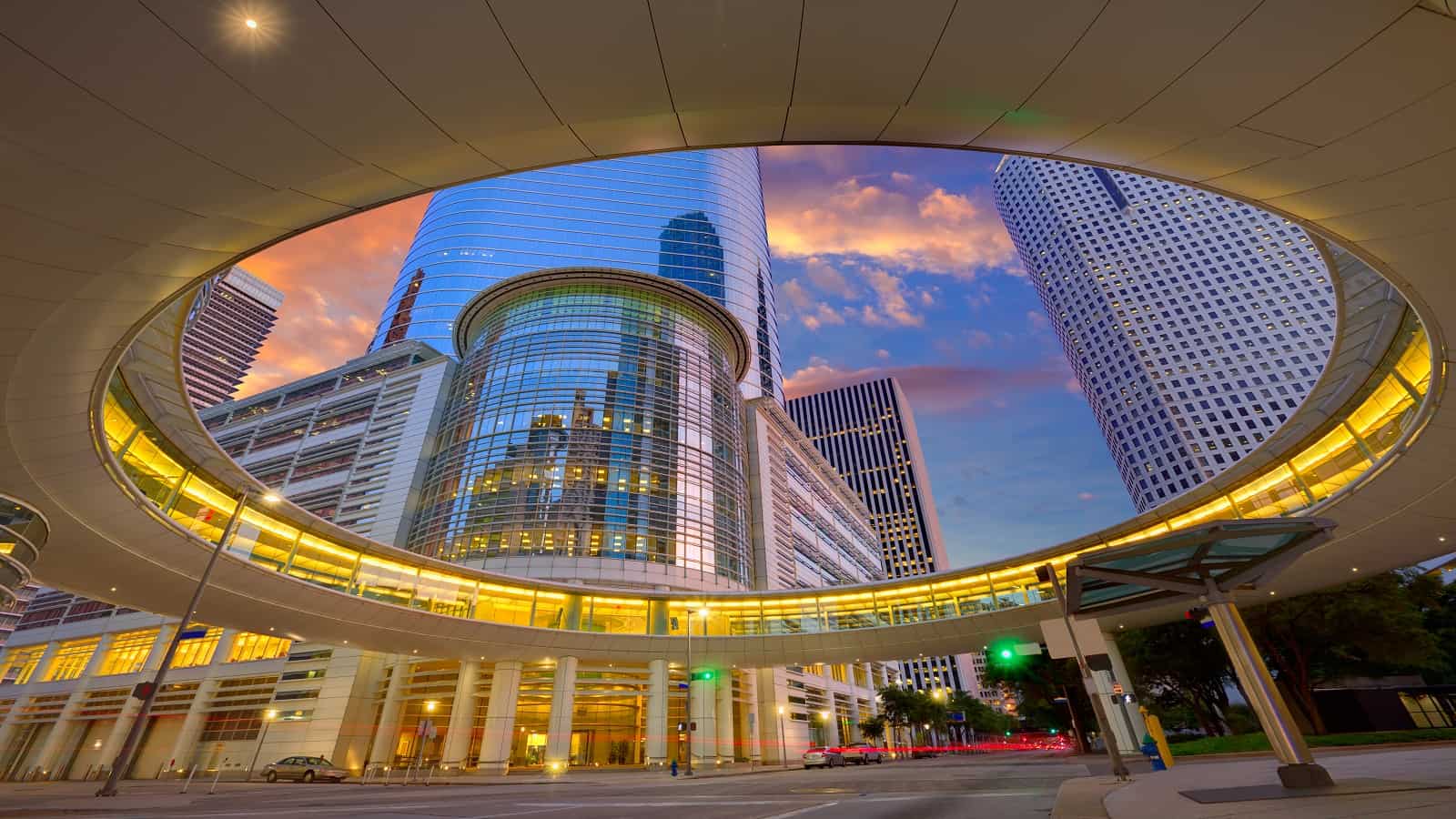 Houston has been ranked the most diverse city in America, just ahead of New York City and Los Angeles! The Bayou City’s racial and ethnic composition is 49% white, 37% Hispanic, 25% Black or African American, 5% Asian, and 16% from other races. It’s been a majority-minority city since 1990. Major foreign languages spoken in Houston include Spanish, Vietnamese, Chinese, indigenous African languages, and Urdu. Houston has American’s second-largest foreign-born population and the country’s third largest Vietnamese population!

This diversity brings many cultures, cuisines, and ideas together into the melting pot that is Houston.

The food scene in Houston is amazing

Houston has been called the next culinary capital of America with a diverse food scene that’s made it a top destination for foodies. What makes Houston’s dining scene so exciting? It’s a direct result of Houston’s cultural diversity and large population of immigrants from around the world. H-Town offers everything from the Southern comfort food you crave to high-concept eateries, authentic Mexican and Vietnamese cuisine, excellent food trucks, and mind-blowing fusion cuisine. Where else will you find Vietnamese-Cajun crawfish?

Houston is a great place to live for energy, medical, and aerospace jobs

Energy, particularly oil and gas, is the largest industry in Houston, but the city also offers a huge amount of aerospace, medical, and even tech jobs. You’ll find this is a huge advantage of living in Houston if you are in the medical field or you are a scientist or engineer. Houston has the world’s largest medical center, the Texas Medical Center. This two-square-mile medical district is home to 61 institutions including the largest cancer hospital and largest children’s hospital in the world.

Houston has a flat terrain without the beautiful scenery of Atlanta

One of the major drawbacks of living in Houston is you’ll miss the hills, mature trees, and beautiful outdoors of Atlanta. Houston is a very flat city with no hills let alone the mountains surrounding Metro Atlanta. You may find that Houston feels very utilitarian with a lot of undeveloped land and boring commercial space.

Living in Houston comes with the risk of hurricanes and flooding

Flooding is a major problem in Houston and it only seems to be getting worse. Despite its extensive bayou system, Houston’s sprawl and concrete has made water collection and drainage an issue. About 30% of all properties in Houston are at risk of being flooded according to Flood Factor. Hurricane Harvey in 2017 showed just how unprepared Houston is for flooding, although the city has been investing in new infrastructure.

One of the cons of living in Houston is you’ll definitely want to invest in flood insurance, even if you do not live in a high-risk flood zone. After all, 75% of homes damaged by Hurricane Harvey were outside the flood zone and most homeowners did not have coverage.

Houston has a lot of urban sprawl and low population density

As they say, everything’s bigger in Texas, including the sprawl. One of the negatives of living in Houston is dealing with the substantial urban sprawl. Houston covers 627 square miles, and its size isn’t limited by mountains, rivers, or lakes. Developers chose to build outward rather than upward. They can practically build anywhere they want with loose land use rules and no zoning laws. There are also new developments constantly going up. This makes Houston time-consuming to navigate and very car-dependent.

When you compare Houston vs Atlanta, you’ll find less sprawl, more densely populated areas, and greater walkability in many of the core neighborhoods of Atlanta. 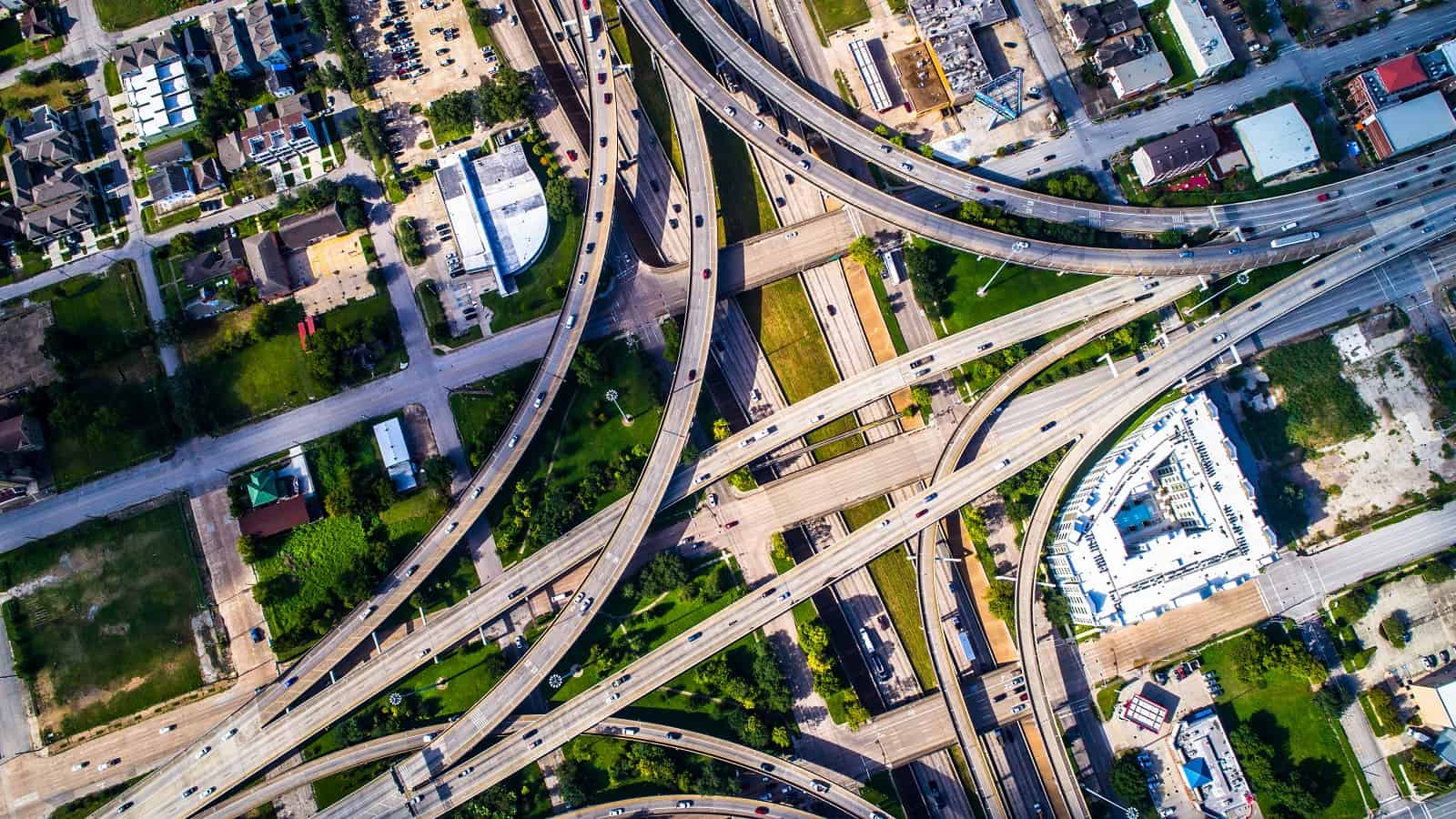 Cost of Living in Atlanta Versus Houston

Population of Atlanta vs Houston

Crime in Atlanta Versus Houston

Is Atlanta more dangerous than Houston? If safety is a concern, you’ll definitely want to know how Atlanta and Houston compare on crime. The Atlanta crime rate is 118% above the national average while Houston has 117% more crime than the national average. However, Houston has more violent crime than Atlanta. There are 1,072 violent crimes per 100,000 people in Houston compared to 769 per 100,000 in the ATL.

When you look at traffic in Atlanta compared to Houston, you’ll be surprised to find they’re very similar – the worst in the country. Atlanta and Houston both have among the worst traffic in the world and the longest commutes in the United States. Houston drivers have the 3rd longest commute in the U.S. and spend 49 hours a year stuck in traffic while Atlanta ranked 8th with 37 hours a year spent in traffic.

Both Houston and Atlanta have public transportation, but they definitely have their limitations. Houston’s METRO light rail system spans just 23 miles with three lines and mostly serves the core downtown neighborhoods. By comparison, Atlanta’s MARTA system has almost 48 miles of heavy rail line. In both cities, you’ll be mostly car-dependent unless you’re living in a handful of communities, but Atlanta’s public transit is more robust.

Sports in Atlanta Versus Houston

Which city is better for sports, Atlanta or Houston? Houston probably comes out ahead. Atlanta is one of only 14 cities with at least four major sports teams and it’s sometimes called the “worst-best sports town.”

How far is it from Atlanta to Houston? About 793 miles or 11.5 hours along I-10. Here’s how to get from Atlanta to Houston, TX. Of course, you’ll probably just end up flying instead of driving. Houston is served by the George Bush Intercontinental Airport (IAH) while Atlanta is served by the Hartsfield-Jackson Atlanta International Airport (ATL), the busiest airport in the world with nonstop service to 160+ destinations!

Atlanta Versus Houston: Where Are You Going to Live?

Now that you have a good idea of what each city has to offer, which one sounds like your new home? Are you interested in the lower cost of living in Houston with energy and medical jobs, or do you prefer the City in the Forest with exciting nightlife and outdoor recreation?

If you have settled on relocating to Atlanta, call Wirks Moving & Storage to deliver the seamless, stress-free moving day you deserve. Call our movers today to discuss your relocation and request a free moving quote!