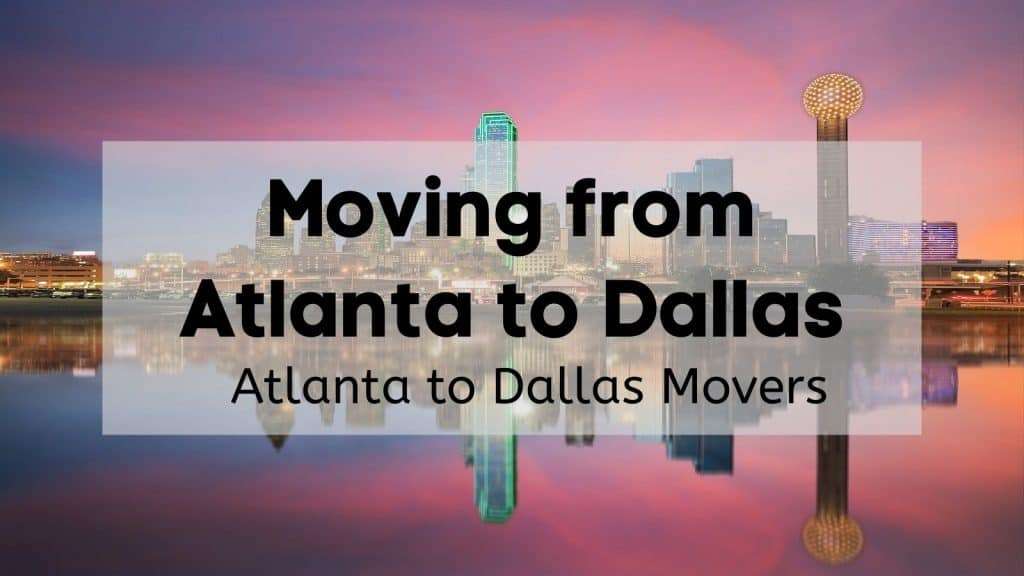 Atlanta and Dallas are among the top 5 cities attracting new residents along with Denver, Phoenix, and Houston. It’s easy to see the appeal of both cities: thriving metropolises with great nightlife, world-class attractions, and strong economies. Of course, as much as Atlanta has to offer, there are many reasons you may be considering moving to Dallas from Atlanta. You won’t be alone, either; the Dallas metro area is one of the top 10 destinations for people moving from the ATL!

Dallas is known for its Mexican and Tex-Mex cuisine, its arts district, and sports with six pro teams including the Dallas Cowboys and the Mavericks. Not sure if moving to the Big D is right for you? Here’s what you can expect when relocating to Dallas and the pros and cons of living in Atlanta vs Dallas, TX plus how the best long-distance movers can help!

Moving from Atlanta to Texas won’t cause much culture shock and you’ll find it easy to adjust to Dallas living. The two cities are alike in many ways, after all: hot summers, diverse neighborhoods, dense urban living, and seemingly endless attractions and things to do. Still, it may help to explore some key differences between Dallas vs Atlanta you’ll need to adjust to.

You’ll find plenty of nightlife options after moving from Atlanta to Dallas with several entertainment districts like the artsy and hip Design District or Bishop Arts District to Deep Ellum with endless music venues, bars, cocktail lounges, and clubs. You’ll find a little bit of everything from metal and rock bars, piano bars, and arcade bars to ritzy lounges, rooftop clubs, and salsa dancing.

You’ll also find a huge array of luxury townhomes, condos, and apartments with upscale amenities – or affordable, family-friendly neighborhoods with room to spread out!

If you’re moving from Atlanta to Dallas with kids or plan to start a family, be prepared for the hit-and-miss school system. Dallas has some of the best schools in Texas including the School for the Talented and Gifted, ranked #8 nationally for STEM and the 4th best magnet school in the U.S. The Dallas ISD has the top three schools in the state.

When it comes to weather, you’ll find living in Dallas versus Atlanta to be pretty similar with long, hot, muggy summers. There are some unique drawbacks of living in Dallas: flooding, heat waves, tornadoes, and hurricane-related storms. Dallas is in Tornado Alley and vulnerable to flash floods, drought, dangerous heat waves, hail, and severe storms from hurricanes. Dallas is one of the five worst summer weather cities.

One of the worst things about living in Dallas is the traffic – even though it’s nothing compared to Atlanta which is one of the worst cities for traffic in the world. A major adjustment you’ll need to make while living in Dallas is, to put it bluntly, bad drivers. Texas has the worst drivers in the country, and Dallas is at the top of the list as the most dangerous city for driving. Reckless driving, speeding, road rage, and drunk driving are all major problems.

Dallas is mostly car-dependent and suffers from a lot of sprawl. Combined with traffic, and more than 1,000 miles of toll roads in the region, driving in DFW can be a miserable experience. The good news is you’ll find life easier once you get used to the public transit system. The Dallas Area Rapid Transit (DART) is America’s longest light rail system with 130+ bus routes and 62 rail stations. There’s also the Trinity Railway Express (TRE) which connects Fort Worth and Dallas. Dallas ranks #16 for public transit, just one spot behind Atlanta public transportation!

Crime is another important factor to consider when moving from Atlanta to Dallas. While the Atlanta crime rate is 24% below the national average, Dallas violent crime is 118% higher than the U.S. average! Still, you’ll find plenty of safe neighborhoods and suburbs in the DFW area.

Why Move to Dallas? Benefits of Moving from Atlanta to Dallas

There are many great reasons to move to Dallas from Atlanta, despite the city’s drawbacks! Here are some ways in which DFW comes out ahead when you compare Atlanta vs Dallas.

Dallas has a strong economy and excellent job opportunities

Employment is one of the top reasons for moving to Texas. The Dallas-Fort Worth area has a diverse economy with major sectors like telecommunications, finance, defense, information technology, and transportation. It has one of the country’s largest concentrations of Fortune 500 headquarters including AT&T, Southwest Airlines, Tenet Healthcare, and ExxonMobil (in nearby Irving).

One of the benefits of living in Dallas is it’s home to the largest art district in the country with restaurants, museums, galleries, performing art venues, Art Deco architecture, and nightlife. Dallas is famous for its shopping, and it boasts more restaurants per capita than any other city in the country!

You’ll love cultural attractions like the Dallas Museum of Art, the Dallas Arboretum and Botanical Garden, the Dallas World Aquarium, and the Sixth Floor Museum at Dealey Plaza.

Atlanta ranks “surprisingly low” among the most diverse cities in the U.S. and it was ranked the 4th fastest gentrifying city in America. There’s no comparing diversity in Dallas TX vs Atlanta GA: Dallas ranks 4th in the country! A veritable melting pot, the Big D ranks high in household, economic, socioeconomic, religious, and cultural diversity. This contributes to the city’s reputation for amazing food and culture.

At first glance, the cities are very similar in terms of affordability. The median home price is $400,000 in Atlanta vs Dallas median home price of $410,000. When you look closer, the differences become more obvious:

Atlanta residents pay about 10% more for monthly bills than the national average!

When you compare the pros and cons of living in Dallas, don’t forget that Texas has no state income tax! Georgia income tax ranges from 1% to 5.75%.

A DIY relocation is more stressful, exhausting, and time-consuming than you may think. That’s why 94% of people surveyed who hired movers for their last relocation said it was worth it and 43% who did a DIY move said they would never do it again.

Here’s how the professional Atlanta to Texas movers at Wirks Moving & Storage can eliminate the hassle, backaches, and stress of your move: 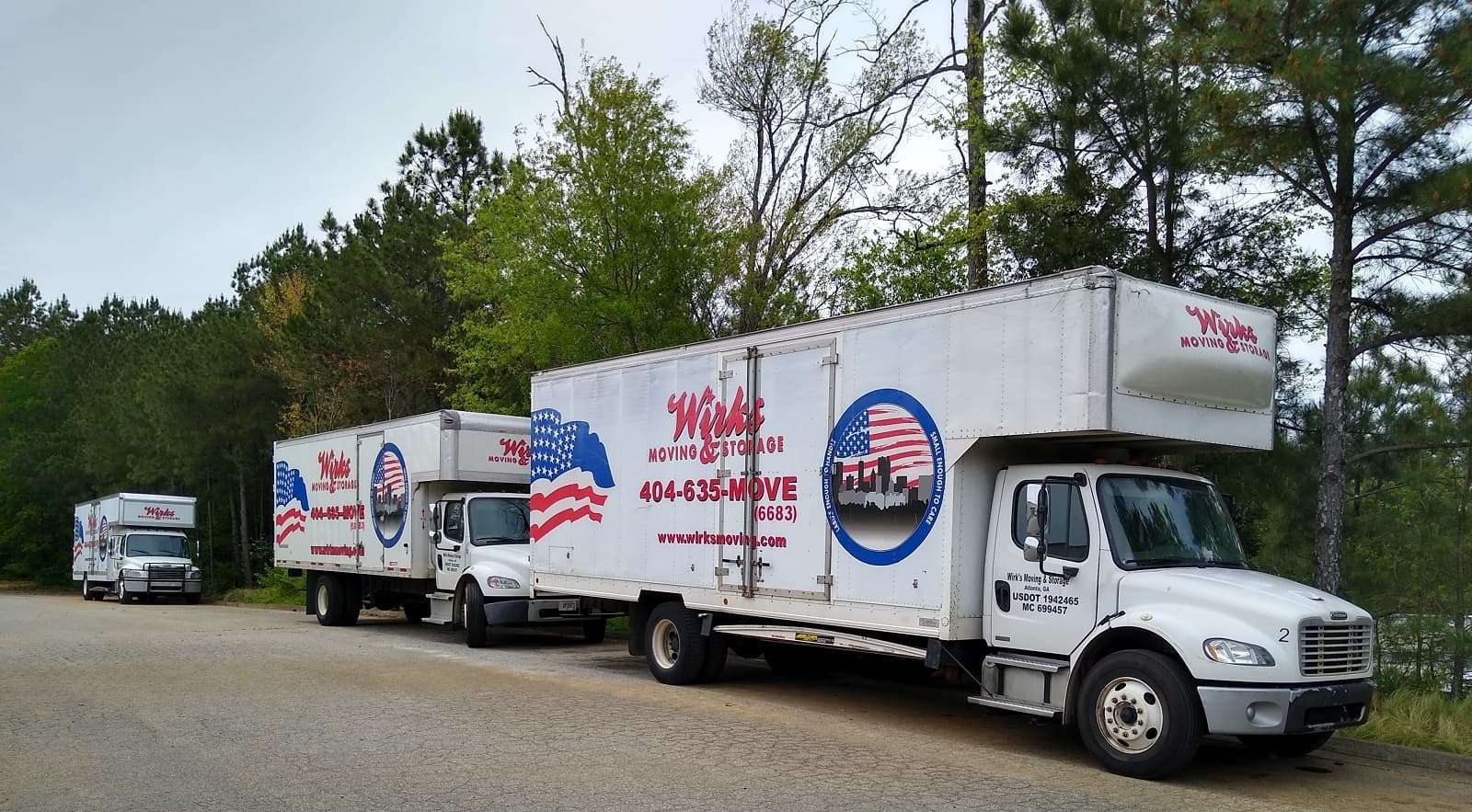 An interstate move is already stressful – why do it alone or risk long delays, hidden fees, and damage from inexperienced movers? Dependable Atlanta to Texas movers take the stress out of your relocation and make your transition as seamless as possible.

At Wirks Moving & Storage, we believe every relocation is the start of a new journey in life. It should be an exciting and positive experience, not stressful and exhausting. Our goal is to deliver the positive moving experience you deserve.

Founded in 2009, Wirks Moving & Storage has completed more than 20,000 relocations with a low claims rate and hundreds of sterling, 5-star reviews. Our customers count on the highest quality of service with our trained movers who arrive on time, handle your belongings with care, and provide attentive customer support. We handle interstate moves of all sizes with years of experience overseeing moves from Atlanta to Dallas!

Cost of Moving to Dallas from Atlanta

How much does it cost to move from Atlanta to Dallas? An interstate move with professional movers isn’t as expensive as you may think! Your cost will be based on several important factors including:

With Wirks Moving & Storage, you can rest easy knowing you will get an affordable, competitive rate for moving to Dallas, TX. Call us today or fill out the form for a personalized moving quote!

How Far Is Atlanta from Dallas? | Distance & Travel Info

With the truck loaded and en route to your new home, you’re ready for the final phase of your big move: getting yourself and the family to Dallas.

If you decide to drive, it’s 781 miles from Atlanta to Dallas or about 11 hours via I-20. Plan ahead for tolls! Open a TollTag account before your move to save at least 50% on tolls and avoid inconvenient mailed bills.

Not up for an 11-hour drive? There are many nonstop flights from ATL to Dallas. The 2.5-hour flight is usually $150 to $250 one-way on carriers such as Frontier, Spirit, Delta, and American. Amtrak does not offer a train between Atlanta and Dallas, but you can take a Greyhound to Dallas for around $90 in economy. The trip takes 18+ hours.

Ready to experience the difference in Dallas vs Atlanta living for yourself? Wirks Moving & Storage is here to help with dependable long-distance movers in Atlanta who will take the stress and hard work out of your move. Give us a call to get started with a free, affordable moving estimate.