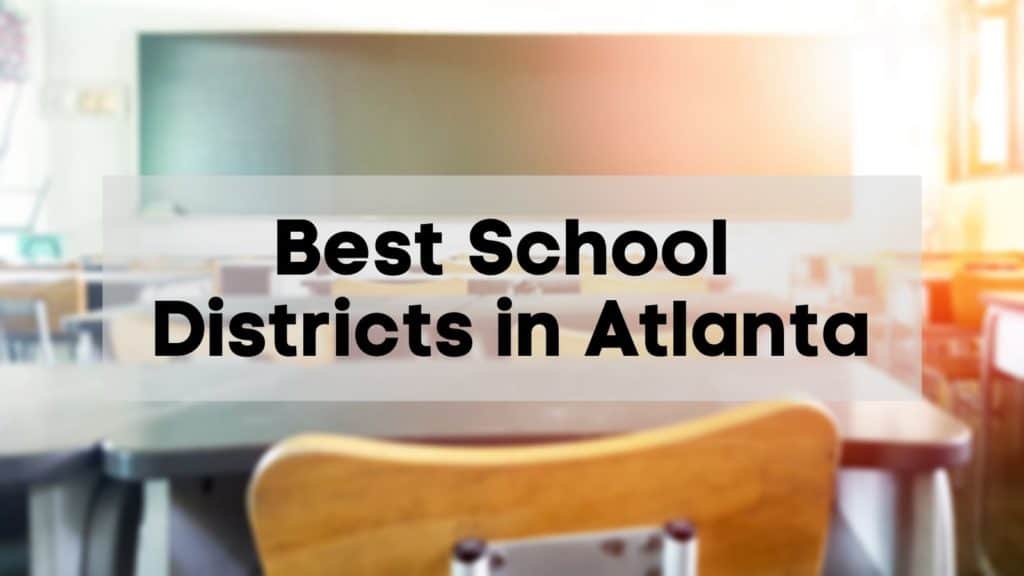 Moving to Atlanta or relocating with kids? Location is everything, especially when it comes to the quality of the education your children will receive. Fortunately, Atlanta is home to some of Georgia’s top school districts, public high schools, elementary schools, and STEM schools.

Here are the top school districts in the Atlanta area including the best high schools in Atlanta and excellent private schools to consider.

Atlanta Public Schools usually isn’t ranked among the best in the metro area with the more well-funded suburbs beating it out. However, it serves all neighborhoods in the city limits with some amazing, award-winning public schools in Atlanta.

What makes BCS stand out?

You can learn more about the Buford athletics program here. Buford High School offers everything from baseball, cross country, and cheerleading to golf, wrestling, soccer, and riflery.

It isn’t just Buford High School that’s highly rated. Buford Academy has been ranked as a Highest-Performing School by the Georgia Department of Education and named one of the best elementary schools in Georgia!

City Schools of Decatur is a public charter school district serving Decatur, a city just 5 miles outside downtown Atlanta and served by several MARTA rail stations. The city is known for its food scene, art scene, and festivals which makes it popular for young families, millennials, and singles.

A post shared by Exit To Future World (@exittofutureworld)

Looking for the best public schools in Atlanta? Don’t overlook Gwinnett County Public Schools which serves dozens of communities throughout the county. GCPS is the largest of the many top school districts in Atlanta, Georgia and the entire state.

This award-winning Atlanta school district has 23 high schools, 29 middle schools, 80 elementary schools, 2 charter schools, and 7 specialty schools. The school has its own police department with full police powers and the schools are divided into 19 zones or clusters. You can click here to find your neighborhood school by address.

The district’s Gwinnett School of Mathematics, Science & Technology is frequently ranked as the best high school in Atlanta and the entire state. In fact, it’s even been rated as one of the top 3 high schools in America several times.

Students are admitted to GSMST based on a county-wide lottery system, but participants must meet several requirements. It’s one of Georgia’s most prestigious high schools with a project-based STEM education and strong focus on technology. The school also has a robust extracurricular program with options like the Robotics Club, Science Bowl, Computer Science Club, Chinese Club, and String Quartet Club.

Even if your child doesn’t get into GSMST, the district has many other top-rated schools. Here are just some of the accolades this top Atlanta school district has earned in 2020 alone.

The district isn’t just home to the top high schools, it also has some of the best elementary schools in Atlanta!

Named One of the Top 100 School Districts in Places You Can Afford, Fulton County Schools is home to dozens of Georgia Schools of Excellence and National Blue Ribbon Schools.

There are over 137 private schools serving 30,000 Atlanta students. Here are the top private schools in Atlanta, most of them within the city and all of them ranked among the top 10 in Georgia.

Does Atlanta have good schools?

9 of Georgia’s top 10 schools are in metro Atlanta, including one of the top 10 high schools in the country! Atlanta has many quality school districts to choose from.

What is the best school district in Atlanta?

That depends on what you’re looking for! The best schools in Atlanta for athletics are in the Buford City Schools district. Forsyth County Schools is the best district for STEM. For academics and extracurricular, Gwinnett County is the best Atlanta school district.

What is the best high school in Atlanta, GA?

Gwinnett School of Mathematics, Science & Technology is Gwinnett County is usually named the best public high school in Atlanta and top 3 in the U.S. Students are chosen with a lottery system, however. The runner-up is Northview High School in the Fulton County district.

Have you narrowed down your options and chosen a great Atlanta school district? Once you’re ready to rent or buy in the district of your choice, Wirks Moving & Storage is here to help. We’ll get you set up in your new home without the hassle and stress so you can focus on more important matters like enrolling your kids in school.