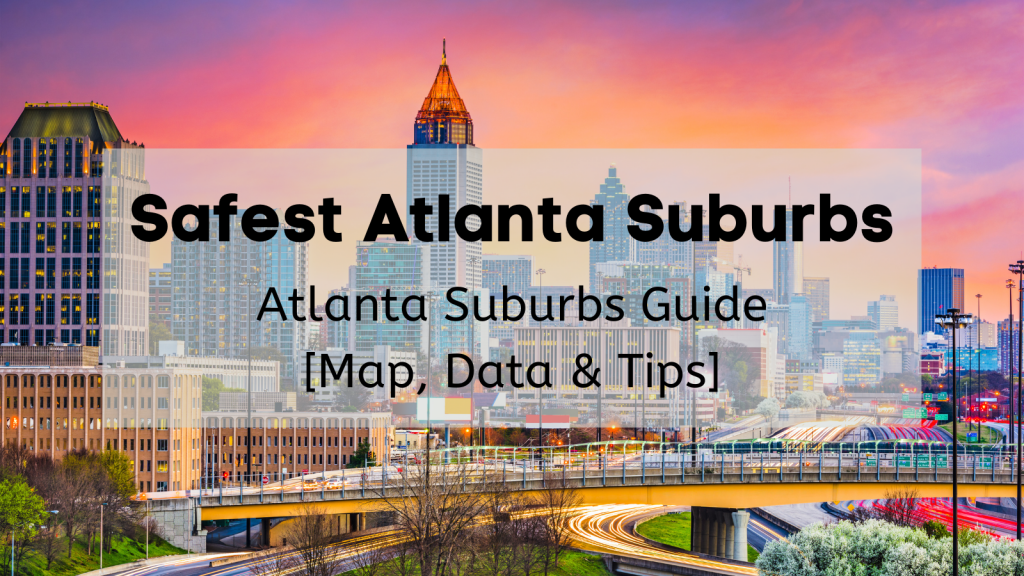 Atlanta, GA, is known for plenty of things, like having the busiest airport in the entire world and its hip-hop music, but they’re also famous for its attractions. Some of the areas that stand out the most include: Zoo Atlanta, Georgia Aquarium, Martin Luther King Jr. National Historical Park, World of Coca-Cola, Centennial Olympic Park, and SkyView Atlanta.

While Atlanta can have higher crime rates in some areas, like any other city in the world, there are PLENTY safe areas to call home – including suburbs. For those who don’t know what a suburb is, it’s an area within a metro area with a mixture of commercial and residential use.

There are plenty of benefits to settling down and living in a suburb, but some of the highest-ranked reasons include more space, lower home prices, highly ranked schools, and even lower crime rates.

Have you already explored the safest neighborhoods in Atlanta but feel like suburbs are a better fit for your lifestyle? Here are the top suburbs of Atlanta with the lowest crime rates!

While Alpharetta was originally known for being the “Technology City of The South,” it’s becoming the hub for new artists. Home to the Ameris Bank Amphitheatre, Alpharetta’s music scene has been growing and continues to flourish.

This beautiful suburb of Atlanta is perfect for people of all ages, from families, retirees, and young adults. There are plenty of great schools to choose from and plenty of fun things to do. In Alpharetta, outdoor activities are the most common, so Rock Mill Park, Webb Bridge Park, Wills Park Recreation Center, and Avalon are just a few of the top attractions in Alpharetta.

Are you thinking about moving to Decatur, GA? Decatur is a one-of-a-kind place to live and has plenty of festivals to attend, historic structures to explore downtown, and one of the best food scenes known to man. This Atlantic suburb is the perfect place if you have kids or are looking for a place to settle down.

Some of the top places to explore in Decatur include Decatur Square, Toy Park, Clyde Shepherd Nature Preserve, Glenlake Park, and Your DeKalb Farmers Market.

Decatur has a killer food scene. Louisiana Bistreaux Seafood Kitchen Decatur, The Iberian Pig, no. 246, Kimball House, The White Bull, and Revival are all tasty places to put on your list.

Johns Creek, GA, is known for being a welcoming community that is great for families to raise their kids or settle down and retire.

The beautiful Johns Creek is known for its breathtaking outdoors and areas to explore. Some of the top places to check out include the Autrey Mill Nature Preserve & Heritage Center, Newtown Park, Shakerag Park, and Ocee Park.

If you’re more interested in Johns Creek, Atlanta’s food scene, look no further because the RosaMia Ristorante Italiano, Sugo, Trattoria one | 41, Pampas Steakhouse, and Mavericks Cantina are all prime restaurants to explore.

Peachtree City, GA | Known For Using Golf Carts To Get Around

As the largest city in Fayette County, Peachtree City, is known for golf carts, with over 10,000 households in the breathtaking city owning a golf cart of their own. While it’s close to Atlanta, Peachtree City still has a small-town feel to the community, making it a great place to call home.

Whether you’re a resident or a tourist, check out these Peachtree City restaurants: The Curious Pig, Palmer’s, Grinds & Wines, Big Shots Kitchen & Bar, The Italian Oven Restaurant, and The Beirut.

Here’s everything you need to know about moving to Peachtree City, GA!

Are you interested in moving to the beautiful suburb of Sandy Springs? Check out some of the best neighborhoods in Sandy Springs, GA!

While Milton, GA, is known for its rural and equestrian heritage, it’s also an affluent place to live— it’s also a great place to move to and settle down. The total crime rate is 76.6% lower than the national average, so if you’re looking for a safe suburb to call home, Milton is the place for you!

If you have kids, you know it’s essential to find the best schools to help set your children up for success. Tyrone has been named one of the “Top 10 Best Atlanta Suburbs For Families” by Movoto, so it’s a great Atlanta suburb to settle down in and call home.

While Tyrone is a small town, there are still some delicious food options and restaurants to check out. Chapultepec Mexican Grill, Nikko Japanese Steakhouse, She Craft Co, Kakao Cafe, and Mimmo’s Gourmet Pizza are just a few of the best restaurants in Tyrone, GA.

Tyrone is one of the safest suburbs of Atlanta, with the total crime rate being 74.1% LOWER than the national average!

Are you looking for a fun and vibrant place to live? Then consider moving to Woodstock! It’s an artsy downtown area that’s filled with a rich history. Whether you’re trying to find a place to meet your girlfriends for a night out on the town, a family-friendly activity, or planning your next date, Woodstock has a place for everyone! A few of the most searched attractions include: Stars and Strikes Family Entertainment Center, Olde Rope Mill Park, Dixie Speedway, Reformation Brewery, Hot Wheels Skate Center, and MadLife Stage & Studios.

Braselton, GA, is known as being a “revised historic district” and is on a mission to transform run-down homes and buildings while preserving the history behind them, this family-friendly community has 40 current historical buildings. Braselton is part of the Gwinnett County Public Schools District, which is #20 out of 181 school districts in the state of Georgia.

If you’re looking for a fun activity to do throughout Braselton, GA, some of the best attractions include the Michelin Raceway Road Atlanta, Braselton Town Green, and the Caffeine & Octane’s Lanier Raceway.

For more attractions, restaurants, and things to do in Atlanta, check out our map!

Are you ready to move to an Atlanta Suburb? Wirks Moving is here to help! When you choose our professional, hardworking, diligent, reliable, and trustworthy crew members, we will help make your transition seamless. Call us today at (404) 635-6683 for a free estimate!