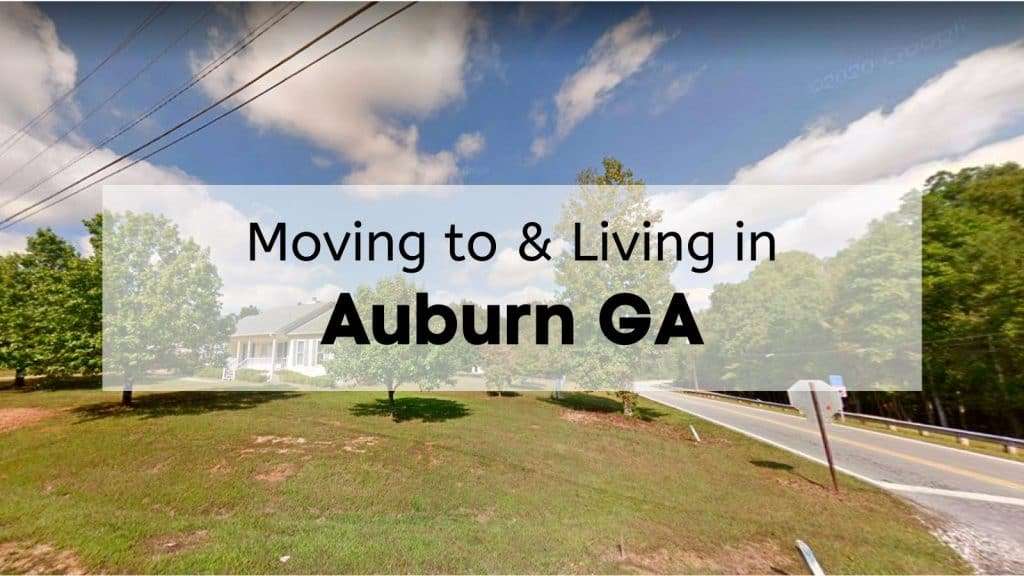 Auburn is a quaint little city located in northwest Georgia. As a suburb of Atlanta, the charming city of Auburn is known for its huge sense of community, tons of community events, and family-friendly environment. While living in Auburn, you’ll find it to be a very cozy and peaceful city with low crime and lots of surrounding trees. Auburn is also home to several lovely parks, a great school system, incredibly friendly neighbors, and even a near 5-star local library. After a railroad was extended to the area, Auburn became incorporated in 1892. Nowadays, Auburn GA is especially attractive for those who love quiet streets, and beautiful nature, and are just over an hour’s drive from the big-city amenities.

Where is Auburn GA Located?

The city of Auburn GA is a suburb of Atlanta and is situated in the Atlanta metropolitan area. Auburn sits east of the city of Dacula and west of the town of Carl. Auburn is within both Barrow and Gwinnett counties whereas the distance from Auburn to Atlanta is 42 miles southwest.

Auburn provides close access to I-85, GA Highway 211, and University Pkwy 316 and 29. While the majority of residents get around by car or by carpooling, the city of Auburn offers a taxi system and a ten-minute drive to the nearest bus station.

According to the U.S. Census, the incredibly safe and laid-back city of Auburn has a population of 7,495 which has increased by 8.8% since 2010. The median age in Auburn is 34 whereas 10.6% of residents are foreign-born. 82.8% of the Auburn population have received a high school diploma or higher and 12.1% have earned a bachelor’s degree or higher. The city is pretty average when it comes to income because the Auburn median household income is $60,721– just $503 below the state median.

Is Auburn GA safe? According to Crimegrade, Auburn scores an A- safety score and is safer than 77% of other cities in the U.S. Your chances of becoming a victim of crime can be as low as 1 in 90 in several areas in Auburn. Considering this, Auburn GA is a very safe place to live and raise a family.

The city is protected by the Auburn Georgia Police Department with all of its dedicated officers who are known for their professionalism and friendliness.

Cost of Living in Auburn, GA

Is living in Auburn GA affordable? Well, the cost of living in Auburn Georgia is 5% below the national average. With that said, Auburn GA is a very affordable city to settle down in. According to the Economic Policy Institute, a family of four living in Barrow or Gwinnett counties should be making $79,130- $86,500 to live the most comfortably. The Auburn income tax rate is 6.0% and the sales tax rate is 7.0%. According to Redfin, Auburn has a median house price of $317,554. If you’re on the lookout for a new place to call home, try searching online for Auburn GA homes for sale. If you’re more interested in Auburn GA apartments, the average apartment rent in Auburn is $1,822 on Rentcafe.

Below is a list of Payscale’s typical living expenses in Auburn, Georgia.

Auburn GA Neighborhoods | Where to live in Auburn

Auburn Georgia is filled with friendly neighborhoods, peaceful streets, and close-knit communities. The northern parts of Auburn GA tend to be the most desirable. You’ll have close proximity to an abundance of beautiful natural landscapes, numerous churches, and great parks. The central areas of Auburn GA are the most affordable and offer a few great restaurants, places to shop, and a community center.

Moreover, the city of Auburn is in the midst of a large Downtown development project.

This affluent Auburn neighborhood is home to many pristine homes, open green space, and proximity to the lovely Little Mulberry Park. Union Grove North is considered to be the most expensive yet most desirable neighborhood in Auburn GA. The median home price here is approximately $479,120.

Harbors Landing is on the south side of Auburn and offers a very affordable cost of living and home prices. Living in this affordable Auburn neighborhood will bring you close to the top-rated Fort Yargo State Park. The median home price here comes in at $256,485.

With a humid subtropical climate, Auburn experiences hot and humid summers with highs of 89°F and short, cold winters with lows of 32°F. Your sunglasses will get put to use throughout the 218 days of sunshine in Auburn. Conversely, a raincoat or hoodie will be useful during Auburn’s 52 inches of annual rainfall. Based on the Auburn GA weather, the best months to visit Auburn are in May, October, and September. 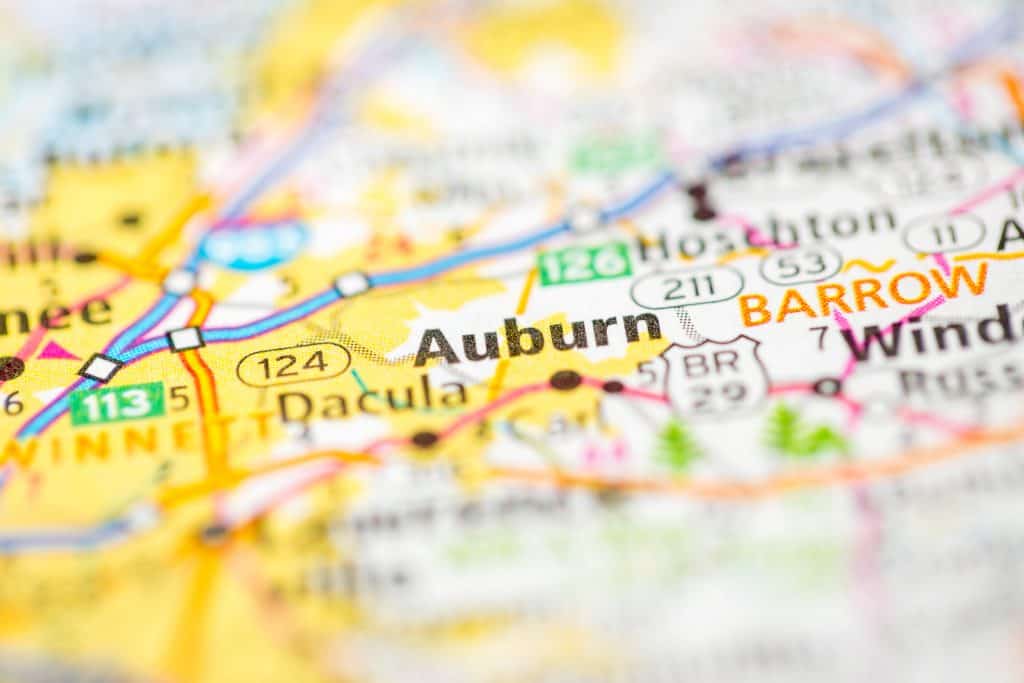 Things to do in Auburn GA

Living in Auburn GA will give you plenty of fun things to do despite being a smaller-sized city. Auburn has fun activities throughout the year for kids and families such as the Sweet Auburn Music Fest and the Auburn Ever After. There are also many sports opportunities at the local volleyball courts, tennis courts, and baseball fields. If you’re looking for somewhere to shop for local items you can stop by the Whistlestop Shops in Auburn. For a larger shopping center near Auburn– Dacula Market in the nearby city of Dacula is a great option. Check out some more places to go in Auburn GA below!

This memorial park in Auburn is a great place to go camping and hiking with friends or family. The park has an abundance of gorgeous surrounding trees, nature trails, picnic areas, and beautiful scenery.

This playground in Auburn is a great place to take the kids! It features beautiful grounds, shaded picnic areas, and plenty of equipment for children to play on!

The parks and recreational facilities in Auburn are maintained by the Auburn Parks & Recreation Department. You can check out Auburn GA events here.

Auburn GA has a few diverse food options to choose from. Although there isn’t an abundance of restaurants within the city limits. There are countless more places to eat within a ten-minute drive. Here are a few restaurants in or near Auburn:

For those hoping to make a living, Auburn GA had a 2.9% job market increase in the last year. The job growth in the next 10 years is 49.3% which is 15.8% higher than the U.S. average. The average base salary in Auburn GA is $59,000 whereas the average hourly rate is $14.00. A few of the most popular job positions in Auburn are accountants, operations managers, and information technology specialists. If you’re interested in Auburn GA jobs, try searching the web for jobs in and around Auburn Georgia.

Auburn is home to one top-rated public school known as Auburn Elementary School which is in the
Barrow County district. With a student/teacher ratio of 12.05, this school serves preschool through 5th grade and has a total of 677 students.

Whether you have a child you want to read to or you’re a senior on the hunt for a new novel, the Auburn Public Library is a well-reviewed public library in Auburn GA.

With this map of Auburn GA below, you can explore more things to do and places to eat in or near Auburn!

Thinking about moving to Auburn GA? Allow our reliable Auburn GA moving services to give you an easy and convenient relocation! Give Wirks Moving a call today at 404-635-6683 or fill out the “Request A Quote” form on this page!