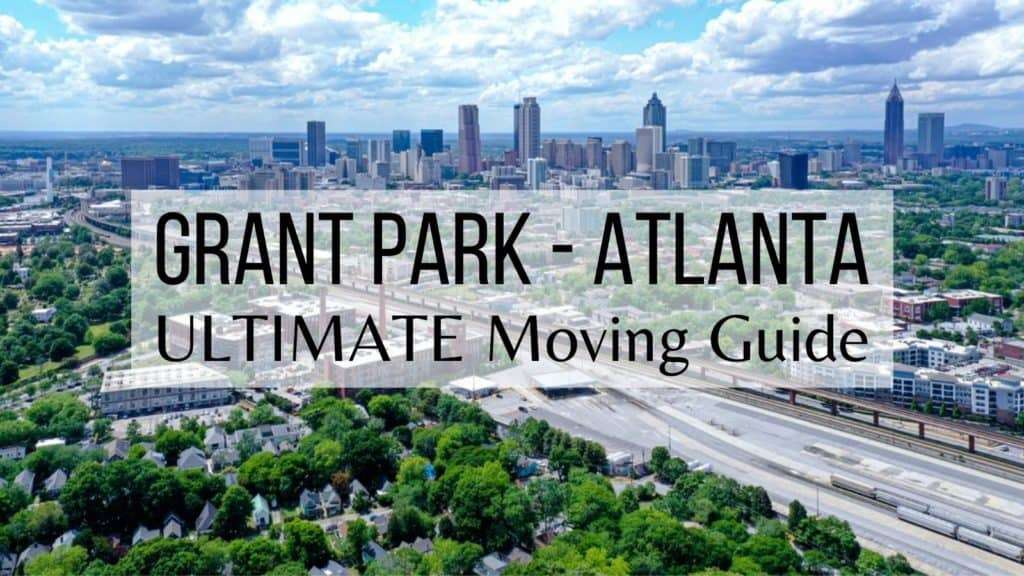 The popular community of Grant Park is a nice part of town only a couple of miles away from downtown Atlanta, GA. With its pleasant atmosphere and many perks close by, it’s easy to see why more people are thinking about moving to Grant Park.

Is Grant Park a good place to live? The small Atlanta neighborhood of Grant Park is one of the safest communities in the city and offers a great place to raise a family. It also provides its residents with a wide range of enjoyable amenities and fun things to do nearby.

Grant Park is known for being the location of the vastly popular Zoo Atlanta attraction that brings in hundreds of thousands of visitors each year. The Grant Park neighborhood is also on the National Register of Historic Places, standing as one of the oldest and most historic districts in the city.

The story of this community dates back to the late 1880s when a Georgia Railroad civil engineer donated approximately 100 acres of his own land to the city of Atlanta. The area was meant to be used as a new suburb and was officially established in 1883 as Grant Park, being named after its benefactor. Grant is also commonly referred to as the “Father of Atlanta” for his additional help in establishing other parts of the big city.

For a short time, a circus was held near the center of Grant Park but the company who owned it went under, leaving a large area of land to be redeveloped. This portion of the community became what is now known as Zoo Atlanta after a man named George Gress donated animals from the circus to the city of Atlanta.

Most of the Grant Park neighborhood development didn’t begin until 1903 when planning was assigned to the Olmsted Brothers, who were the sons of Frederick Law Olmsted. The Atlanta community has since blossomed into a thriving suburb with the majority of residents thoroughly enjoying living in Grant Park.

The Grant Park neighborhood covers a land area of only about 1.75 square miles. It is located about 1.8 miles southeast of downtown Atlanta near the eastern edge of Fulton County. Grant Park is bordered by Summerhill, Capitol Gateway, Cabbagetown, Glenwood Park, Ormewood, Chosewood Park, and Peoplestown.

Boundaries of Grant Park extend from just north of Englewood Avenue on the south side to Memorial Drive along the north, while also including the Oakland Cemetery. The side boundaries reach from as far west as Connally Street over to the Southside BeltLine Trail along the east.

Residents living in Grant Park are served by Atlanta public transportation providers including MARTA, GRTA Xpress, CobbLinc, and GCT. After moving to Grant Park, locals also have nearby access to the Atlantic Station Shuttle and The Buc. Since Grant Park is so close to downtown Atlanta, local rideshare programs like Uber and Lyft are common forms of transportation as well.

The population in Grant Park is 6,557 residents with a median age of 34 years old. Local people residing in Grant Park are considered more educated than many other parts of Atlanta with about 67% of the population having a college degree. Nearly 50% of Grant Park households are families with children, making it a good place to raise kids. 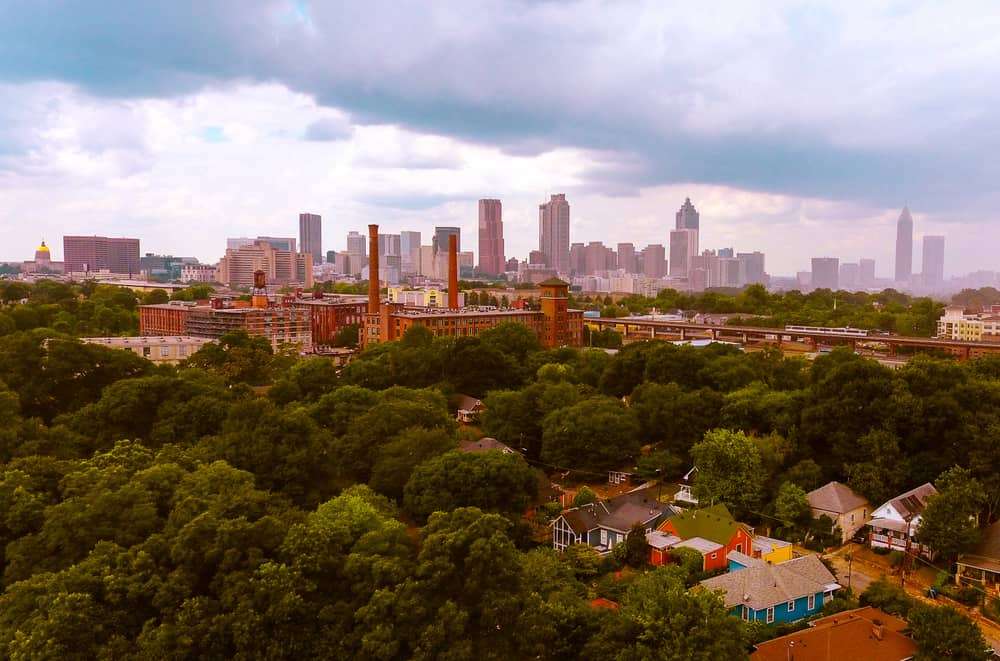 Grant Park demographics are mildly diverse with a population of about 69% Caucasian, 22% Black or African American, 5% Hispanic or Latino, and 2% Asian. The median household income in Grant Park is $90,900 per year, which is more than $24,000 higher than the Atlanta median.

Considered one of the safer places to live in the state, Grant Park is within the top one-third safest cities in Georgia. The crime rate in Grant Park is 8% lower than the national average. People living in Grant Park have a 1 in 44 chance of being a victim of a crime.

Places to Eat, Things to Do, & Shopping in Grant Park

Atlanta is known for many of its popular attractions and fun things to do. And Grant Park is home to quite a few of those beloved activities.

As one of the top places to eat in Grant Park, the Six Feet Under Pub & Fish House is a popular seafood restaurant near Oakland Cemetery (hence the name “Six Feet Under”). The eatery features a fantastic spread of seafood dishes ranging from steamed shellfish and crab platters to fish tacos and various sandwiches.

A post shared by Six Feet Under Pub&Fish House (@sixfeetunderatl)

Grant Central Pizza & Pasta is yet another of the best restaurants in Grant Park with some of the best Italian-style pies around. Take your choice of pizzas, calzones, salads, and pastas, and pick your own toppings.

Easily topping the most popular things to do in Grant Park, Zoo Atlanta is a fun attraction for people of all ages. The zoo is home to over 220 species and more than 1,500 animals such as lions, elephants, gorillas, pandas, birds, orangutans, and many others. Zoo Atlanta is one of the top attractions in Grant Park for kids.

Spanning a massive area of 131 acres, Grant Park takes its name from the community where it is located and welcomes millions of visitors every year. The park is massive with tons of green space to run, play, or simply enjoy a picnic. As one of the top places to visit in Grant Park, the local park has its own pool, tennis courts, walking trails, fountains, and is also the location of Zoo Atlanta.

With 63,000 square feet of shops and dining, Larkin On Memorial is one of the best places to go shopping in Grant Park. The local destination features a wide variety of stores and places to eat including Taqueria del Sol, Squash Blossom, Primrose Schools, My Salon Suite, and Vibe Ride.

The local Grant Park Market is one of the most common places where residents do their grocery shopping. With a great spread of amazing produce, prepared meals, and much more, you’ll love the selection of wonderful food it has to offer. Grant Park Market also provides catering services for personal and professional events.

Map of Amenities in Grant Park

The cost of living tends to be higher in Grant Park when compared to the Atlanta city average. One of the larger expenses you can expect includes housing due to the pricier real estate market in Grant Park.

There is a homeownership rate of 50% in Grant Park, meaning that half of its residents own their living space while the other half rents. The average price of a home in Grant Park goes for about $434,000. Homes for sale in Grant Park go for a median sales price of $241 per square foot. 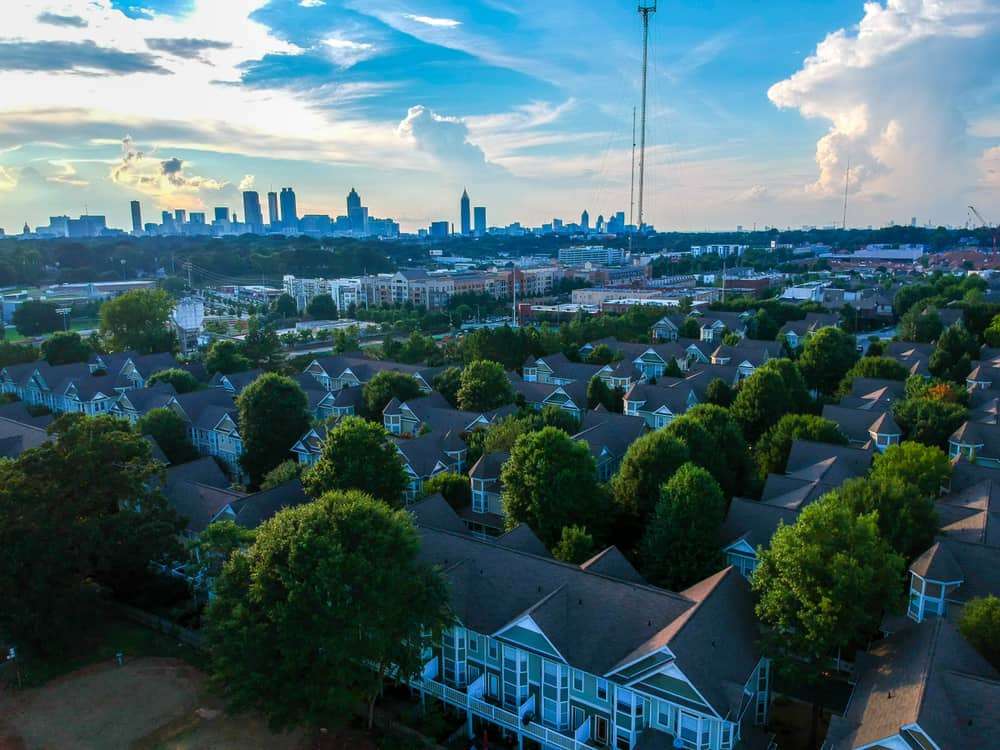 The average price of rent in Grant Park is $1,488 per month with the final amount depending on where you live, the location size, and other factors.

With about 1,098 kids under the age of 18 years old living in Grant Park, children make up about 17% of the total neighborhood population. The Grant Park area is served by the Atlanta Public School District. Local schools in Grant Park include:

You’ll find there are many reasons to move to Grant Park in Atlanta. If you need a team of top-rated Grant Park movers, we offer helpful relocation services here at Wirks Moving! Call us today at (404) 635-6683 or complete the Request a Quote form on this page for a free moving estimate!