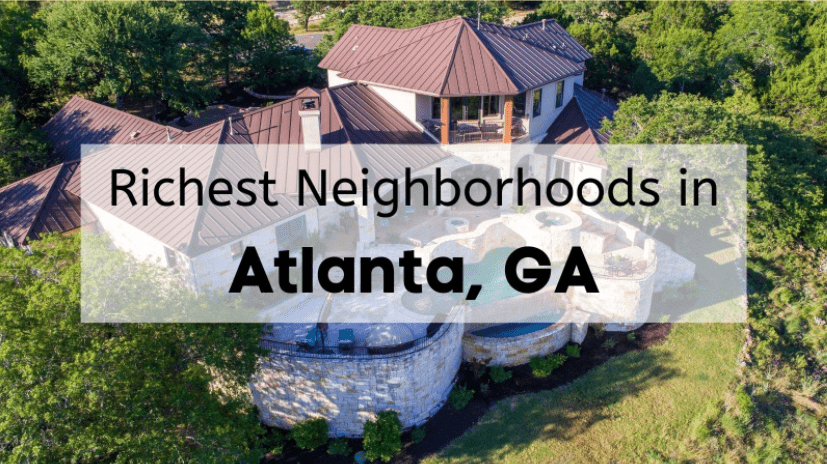 The city of Atlanta sits among the foothills of the Appalachian Mountains and is known as the “City of Trees” due to its dense urban tree coverage. Atlanta has a rich history in the state-sponsored railroad, experiencing rapid growth as the city became the convergence point among multiple railroads. During the 1950s and 1960s, Atlanta was heavily involved in the civil rights movement, with Martin Luther King Jr and others leading the way. Today’s Atlanta is home to the Coca-Cola Company, The Home Depot, UPS, Delta Air Lines, and AT&T Mobility.

Atlanta is active in all major performing arts disciplines, including opera, music, theater, ballet, broadcasting, film, and television. Residents and locals love the culinary scene of the city, consisting of a mix of urban establishments, ethnic restaurants, and traditional southern dining.

With its diverse culture and access to employment and entertainment options, it’s no surprise that there are several wealthy neighborhoods within the city limits to choose from. Affluent neighborhoods where stately homes are within walking distance to much of the amenities Atlanta has to offer. Crime rates throughout Atlanta vary greatly, but the wealthier neighborhoods have the lowest crime rates and often have their own neighborhood security patrols to increase the safety of the area. Public school districts in Atlanta are above average, and several private schools are conveniently located within the richest neighborhoods.

Other advantages of living in Atlanta’s richest neighborhoods include access to 5-star restaurants, trendy bars and coffee shops, community festivals, and luxury shopping options with world-renowned designers. Along with the interesting details of these wealthy Atlanta neighborhoods, we’ve pulled together information from the US Census and Redfin to help you discover everything you want to know if you are looking to move to Atlanta.

Located along the Chattahoochee River just 17 minutes to downtown Atlanta, the Paces neighborhood is one of Atlanta’s richest neighborhoods with a median household income of $166,600. The neighborhood is home to two elite private schools, The Westminster Schools and Lovett, which attract many families into the neighborhood each year when the acceptance letters are mailed out.

The area features mostly secluded, single-family, traditional and European style estate homes with large acreage, selling for an average price of $504,000 and as high as $20 million. The elevation of the neighborhood allows for a view of the Atlanta skyline.

For an upscale dining experience, many people visit Canoe, a farm-to-table restaurant with an elegant garden overlooking the Chattahoochee River.

Brookwood Hills sits just a few miles from Atlanta’s major business districts, along Peachtree Road, and just north of its namesake, Brookwood neighborhood. It’s positioned where Buckhead meets Midtown. Brookwood Hills was founded in the early 1920s by Benjamin Franklin Burdett, during which time he planted oak trees along the streets that wind around and over the hills rather than take the popular grid form. Today, the neighborhood is known for those giant oak trees.

One of the wealthiest neighborhoods in Atlanta, the median household income of Brookwood Hills is $148,600. The homes reflect a wide variety of design styles and elements including Colonial, Tudor, Cottage, and Neoclassical and are the most expensive in Atlanta with the average home price of $1.8 million. The neighborhood is served by Atlanta’s public school system although many families send their children about three miles north on Peachtree St. to the Atlanta International Private School.

Community life revolves around the center of the neighborhood, where Brookwood Hills Community Club sits on over 5 acres and offers a swimming pool, tennis courts, and playground.

Another affluent neighborhood in Atlanta, North Buckhead is at the northern edge of the city, between Atlanta and Sandy Springs. Homes are beautifully landscaped and the neighborhood features highly walkable streets. The residential areas are quiet, yet you are never far from the bustling nearby restaurants and shopping centers. There are about 3,500 owner-occupied residences in North Buckhead, with about 48% single-family homes and 52% in high-rises or low-rise condominiums boosting the population. The median household income of North Buckhead is $128,300.

The North Buckhead Civic Association brings the neighbors together for several events annually, including their infamous Block Parties which feature up to 600 residents and friends in attendance. At the intersection of Peachtree and Lenox Roads, Phipps Plaza offers over 100 luxury shopping and dining options, featuring world-renowned brands like Gucci, Kate Spade, and Balenciaga.

Despite its location off the busy West Paces Ferry Road, Kingswood is tucked away behind a stately entrance with holly hedges and a brick sign. The upscale neighborhood consists of several cul-de-sacs and is home to the highest median household income in Atlanta, at $216,700, and since there is only one way in and one way out of the neighborhood, there is no through traffic which makes it safe for kids to play in the streets. Families have their choice of sending their kids to above-average Atlanta public schools or several private schools, including The Westminster Schools, Atlanta International School, or Pace Academy, which is directly across the street.

Despite its name, there has never been a body of water known as Lake Claire! The neighborhood is named after the intersection of Lakeshore and Claire Drives and sits on the east side of Atlanta in DeKalb County on the Gulfside of the Eastern Continental Divide.

Lake Claire is one of Atlanta’s smaller neighborhoods with a close-knit community of diverse residents consisting of entrepreneurs, professionals, artists, empty nesters, and young families. Homes in Lake Claire are equally diverse, with Victorian, bungalows, cottages, and contemporary styles adorning the streets.

Argonne Forest is the richest neighborhood in Atlanta, with a median household income above $250,000 and average home prices over $1.5 million. Homes sit on large lots and many are 1950s to 1960s ranches that have been expanded over the years or completely remodeled into two-story, classical homes.

As one of the wealthiest neighborhoods in Atlanta, Peachtree Hills is also among the coziest. Established in 1912 between the village of Buckhead and Atlanta, the intersection of Peachtree Hills Avenue, Peachtree Road, and Kings Circle now features several shops and upscale restaurants in the heart of the neighborhood.

As you walk down the sidewalk-lined streets, charming bungalow and craftsman homes are mixed with new construction – all with beautifully landscaped yards and flower gardens. The lots are narrow and there are few garages in the neighborhood, but residents love the ability to grab brunch, enjoy a 5-star restaurant, or visit the wine shop all without leaving Peachtree Hills.

Several art galleries and Peachtree Hills Park with a community garden live among the residential streets. And, Atlanta Decorative Arts Center has more than 550,000 square feet of luxury furnishings so you won’t have to venture far to decorate or furnish your home. The average median household income for the neighborhood is $83,100.

The Candler Park neighborhood in Atlanta surrounds a 55-acre city park of the same name. Best known for its historic homes, the area was donated to the city of Atlanta by Asa Candler, the founder of the Coca-Cola Company and former mayor of Atlanta. Candler Park hosts several festivals, including the Fall Fest which draws over 15,000 attendees for two days of music, artist markets, and carnival rides.

In the early 2000s many of the neighborhood’s older homes were demolished and replaced with larger, more expensive homes. The median household income in Candler Park is $92,400. Today, the majority of homes are craftsman bungalows, Victorian one and two-story homes, and American Four-Square houses.

The Grant Park is one of Atlanta’s richest and oldest historical districts, bordered by Cabbagetown on the north and Chosewood Park on the south. The neighborhood is home to a 131-acre park of the same name and Zoo Atlanta. Most homes and buildings were built between 1882 and the first decades of the 20th century, meaning the area is largely Victorian architecture with two-story mansions, Queen Anne houses, one-story Victorian-era cottages, and craftsman bungalows.

The second-oldest house in Atlanta is still standing in its original location, an 1858 mansion owned by Lemuel P. Grant, an engineer who helped bring the railroad to Atlanta, for whom the neighborhood and park were named.

Ormewood Park is one of Atlanta’s wealthiest neighborhoods, initially developed in 1892 when Samuel W. Goode and Company subdivided a 100-acre plot. It’s situated east of Grant Park, separated by the Atlanta Beltline. The earliest homes of the area were build during World War I and many of the prefabricated and catalog home sfrom the era still exist in the neighborhood today.

Located just 16 minutes from downtown Atlanta and 15 minutes from the airport, Oremwood is close to everything modern while still giving a cozy, historical feel.

Map of Richest Neighborhoods in Atlanta

Are you checking out the richest neighborhoods in Atlanta because you’re relocating? If so, let Wirks Moving and Storage help! Our top-rated Atlanta movers are there every step of the way. Call us today at 404-635-6683 for a free estimate.