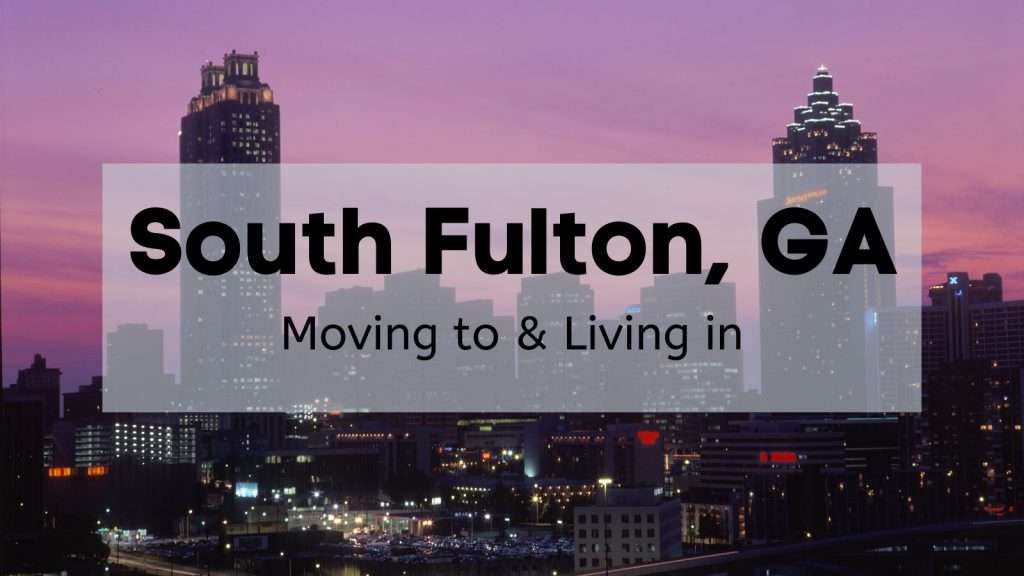 South Fulton’s history, as previously stated, is very short indeed. As an independent city, it has only existed since May 1st of 2017. Incorporating a significant part of southern Atlanta, the newborn city is well-represented in all manner of things, including suburban and residential neighborhoods, bustling business districts, nightlife, and more.

South Fulton covers most of the southern area of Atlanta, which is historically Black. This contributes greatly to the culture and general atmosphere of the city. Today, South Fulton is known as “a city on the rise”, and for good reason! It is quickly growing, and will offer plenty of economic opportunity to anyone willing to look, as well as opportunities for shopping, fun, and good eats. As such, the City of South Fulton is a good place to live.

Where is South Fulton, GA?

South Fulton is located in Fulton County, bordering Chattahoochee Hills, Palmetto, Fairburn, Union City, and College Park to its west, south, and east, and Atlanta itself to the north. Part of the city’s northern border runs along the Chattahoochee River.

Want to know where South Fulton is in relation to other cities? Many residents regularly commute to Atlanta, be it for work or play. The distance from South Fulton, GA to Atlanta, GA is 19.5 miles.

38.6% of South Fulton’s population has attained a bachelor’s degree or higher, which is 20% higher than the rate for Georgia.

The primary ethnic majority in South Fulton demographically is Black, at 92%. The White population is 4%, as well as an about equal Hispanic demographic, at 3%. 8.2% of South Fulton’s population are foreign-born, with 60% of the foreign-born population coming from Latin America.  The city’s gender ratio is heavily weighted towards women, at 56%.

As a new city, South Fulton has not had the time to develop its own transportation infrastructure – although comprehensive city plans to reform transportation are certainly in the works – and mostly relies on Atlanta transportation. The primary provider of public transportation in South Fulton, both bus and rail, is MARTA, which provides access to the entire Atlanta metropolitan area. South Fulton is run through by the Route 70 and Route 154 highways, and the I-85. The most substantial airport in the area is the Fulton County Airport (code: QFHH+4Q Atlanta, Georgia, USA), which is about twenty minutes away by car.

The cost of living index in the Atlanta-Sandy Springs-Alpharetta, GA metro area is 5% higher on average than other places in America; with South Fulton being quite affluent, this is likely to be higher, although not by much. See below for a breakdown on real estate and renting.

According to the Economic Policy Institute, a family will have to make, on average, $86,398 to live here.

Here are some common items you might buy, and their prices according to Numbeo:

South Fulton gets a 61 on Redfin’s competitiveness scale, with home sale prices relatively stable and around 20% of homes being sold over list price.

55% of South Fulton residents rent their homes, according to RentCafe. The average rent in South Fulton is $1,861 monthly for 971 sq. ft., which is pricey for the general area.

If you want to make yourself a part of any of these communities, browse the latest listings for homes for sale in South Fulton, GA.

Named one of the historic districts of South Fulton in 2020, Red Oak’s history stretches back to the 18th century, just at the dawn of European settlement of the territories that would become Georgia. Supposedly, the name of the neighborhood derives from a red oak that grew outside the postal station for the area that had been constructed in the 1800s. Red Oak today is known as an affluent neighborhood with plenty of beautiful, historic architecture, and a bustling main street.

Formerly called “Monk” in the late 19th century, the name of this South Fulton neighborhood changed in 1911 when it was incorporated as its own town. It is run through by the Stonewall Tell Road, which provides access to Cliftondale, as Cliftondale was once called “Tell”. Stonewall today offers plenty of historic sites and architecture, as well as plenty of parks.

Initially the site of one of the largest Native American villages in the region, Sandtown today is a community that is primarily residential in nature. Maintained by a volunteer community association, Sandtown is nice, and perfect for families!

South Fulton is a humid subtropical climate, according to the Koppen classification, and the city gets plenty of rain and very little snow (about one inch annually). You can expect lows of 33 degrees Fahrenheit during the winter months, and highs of 88 degrees Fahrenheit during the summer months. South Fulton experiences more than the average amount of rainfall when compared with the rest of the United States, with 52 inches per year. The best times to visit South Fulton, in terms of comfort rating, are May and October. The coldest month is January.

With inclement weather like this, South Fulton is regularly subject to extreme weather events that Atlanta is, like storms and tornadoes, as well as hurricanes.

If you want something more sophisticated while living in South Fulton, look no further than the Green Manor Restaurant, providing top-notch Southern dishes in a stately Southern manor.

While the name might sound unappetizing, we assure you that the excellent hoagies, cheesesteaks, breakfasts, and Southern food served at this South Fulton establishment is anything but.

Looking for the taste of Central America while living in South Fulton? Let this excellent Mexican restaurant provide that for you!

Things to Do in South Fulton, GA

You’ve likely already heard of the plethora of great attractions and wonderful shopping centers! You should check out some of the best things to do in South Fulton, GA below:

Map of South Fulton Things to Do

South Fulton has a variety of sports offerings, handled by the Athletics Department. Offerings include a baseball team, a football team, kickball, and cheerleading teams, many of which are provided by the Legacy Leadership Academy, or are affiliated with local schools. The nearby Georgia Sports Park has fields for a variety of sports, and hosts many local games. For more big league sports, Atlanta and its wide variety of sporting facilities is only a short drive away!

Here’s how South Fulton compares in crime to three cities of similar size:

Compared to other cities of its size, South Fulton certainly performs poorly in terms of crime. While crime does exist, there are safe places to live  in the city. South Fulton is served in law enforcement matters by the South Fulton Police Department, with 138 enlisted officers.

With Atlanta nearby, you’ll never struggle to find gainful employment in South Fulton! Being mostly residential, the city doesn’t have much industry within its borders – but you won’t have to go far to find it! According to Payscale, the most popular positions of employment are Software Engineer, Project Manager, and Operations Manager. The largest employers in the area, and by extension the best places to work in South Fulton, are The Home Depot Inc., KPMG, LLP, and Delta Air Lines Inc.. The average salary for a worker in South Fulton is $74k a year, while the average hourly wage is $19.87.

South Fulton is filled with job opportunities of all sorts! Check out the latest listings for jobs in South Fulton, GA or visit the city job board.

South Fulton is served by the Fulton County Schools District for public schools, which has 43% of its schools rated “Above Average” by GreatSchools. Some of the best schools you’ll find in and around South Fulton include the Sweet Apple Elementary School, Webb Bridge Middle School, and Chattahoochee High. The city is also home to many prestigious private and specialty schools.

If you or a family member are looking to get into higher education, you’ll find plenty of options in South Fulton and Fulton County. The nearby Georgia State University, provides bachelor’s, master’s, and PhD degrees, as does the Georgia Institute of Technology, better known as “Georgia Tech”.

Does living in South Fulton, Georgia sound enticing to you? We’re ready to help you with your moving journey! Tthere’s no moving company that can compare to our excellent service, which is why you should give Wirks Moving a call at 404-635-6683! Our team of trustworthy and experienced South Fulton movers will make any sort of relocation easy! Call now or fill out our online form for a free quote!