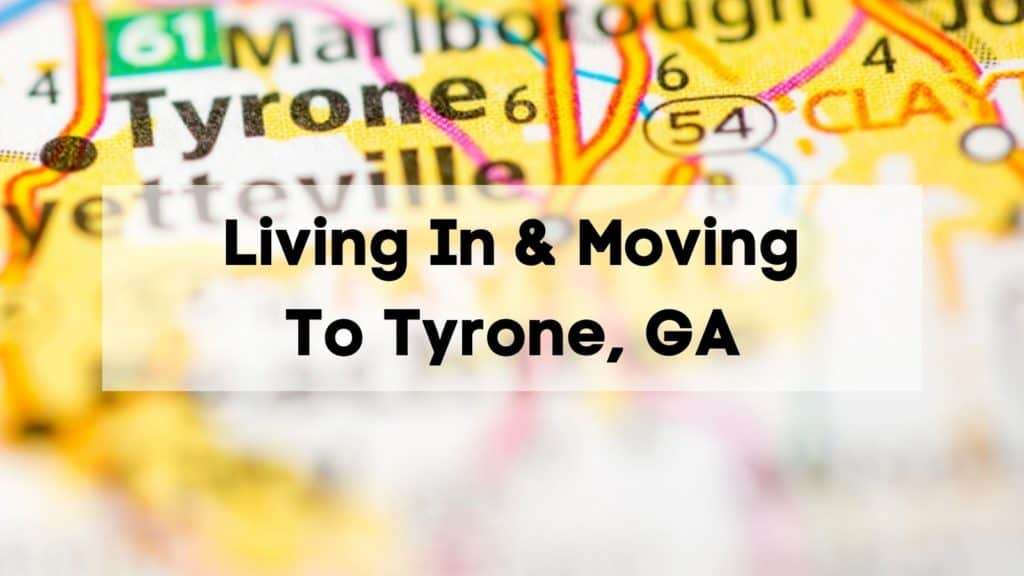 The town of Tyrone, GA is a charming and safe community only 30 minutes from Hartsfield-Jackson International Airport, the busiest airport in America, and only 31 minutes southeast of the Atlanta Metro area. Tyrone was first settled in the early 1900s, and the Town of Tyrone was incorporated in 1911. Ranked as one of the safest cities in Georgia, Tyrone offers a low crime rate, beautiful parks, lots of trails for bikers and joggers, sports leagues, and many community events throughout the year. You’ll find everything from local businesses to nationally recognized performing arts venues to world-class television and movie production studios. The schools here are excellent, the neighborhoods are beautiful, and the people are welcoming. Notable people from Tyrone include NFL player Andrew Gardner and NASCAR driver Joey Clanton.

Tyrone has a population of 7,295. Tyrone’s population is 50.4% female and 49.6% male. The town is fairly diverse with Tyrone’s racial demographics being White 62.6%, Black or African American 25.3%, Other 3.84%, White Hispanic 3.63%, and Asian 3.18%. The median age in Tyrone is 40.9, so many families and young adults live there. Over 55% of Tyrone residents have attained a higher education degree, so the town has a lot of professionals and unique talents. Luckily, you can feel very safe in your community since Tyrone’s overall crime rate is 62% lower than the national average, making Tyrone a safe place to live. The Tyrone Police Department has 18 sworn officers who provide 24/7 law enforcement services protecting their citizens, visitors, and businesses. You can rest assured that Tyrone is a very safe place to live.

The majority of Tyrone residents own their homes. The homeownership rate in Tyrone is 84.78%. The housing market in Tyrone is considered to be somewhat competitive with homes being sold within 9 days for about list price. The median price of a home in Tyrone is $435,500. The cost of homes in Tyrone is increasing steadily by 6.2%, you’ll want to buy your home there before prices continue to rise! Check out the many beautiful homes for sale in Tyrone, GA.

About 15.22% of Tyrone residents rent and don’t own a home. The average rent in Tyrone is $2.350 for a 1-bedroom apartment. The rent trends in Tyrone are projected to stay the same in the next year!

The most popular neighborhoods in Tyrone are River Oaks, Carrowmore, and Southampton Village. River Oaks is a pristine and expensive neighborhood with beautiful homes ranging from $800,000 to $1,000,000 and more. Carrowmore is a quiet neighborhood with stunning brick homes that start at around $400,000. Southampton Village features large homes, with 4-7 bedrooms on lots up to 1 acre. The homes here are very reasonably priced, starting at $525,000. Tyrone also offers some convenient shopping, including North Town Plaza Shopping Center and The Shoppes at Carriage Oaks.

The summers are hot and muggy and the winters are short, cold, and wet in Tyrone. It’s partly cloudy there year round. The highs in Tyrone in the summer are 89°F and the lows are 70°F. In the winter, the average high temperature is 53°F and the average low temperature is 34°F. Tyrone’s weather gets 50 inches of rain, on average, per year, well above the US average of 38 inches. The town gets 2 inches of snow per year on average.

Things to Do in Tyrone

Although Tyrone is a small town, you can find a little bit of everything for every member of the family, from outdoor adventures to inside games that young and old alike can enjoy! Check out Tyrone’s top attractions below:

A post shared by Bill Daryll Howard & the Twins (@shamrockducks)

Shamrock Park is a beautiful park where you can exercise, play, or just enjoy the weather. Amenities include a baseball field, soccer fields, tennis courts, basketball courts, walking and jogging trails, and fishing in the lake. You can walk around the lake or admire the local ducks and geese from one of the many benches perfectly situations for you to relax in the shade. They also have picnic tables to stop and eat. Shamrock Park is a great place to take the whole family for a fun day outdoors.

Legacy Theatre is a professional theatre and performing arts conservatory. Classes in ballet, tap, and musical theatre are available for all ages and broken down by age and experience level. Private lessons and summer camps are available as well from the well-trained staff. Every spring the theater puts on a show for the community with the students as the stars! You can also book parties for your kids at The Little Theatre at Legacy.

Additional Things to do in and around Tyrone

The Town of Tyrone is committed to providing quality parks for all its residents. Tyrone currently has 5 main parks and over 80 acres of park space, with about 10 miles of multi-use trails for walking, jogging, cycling, and more.

Tyrone has plenty of good dining options to choose from, and here we’ve listed the top-rated restaurants in Tyrone below for you to try out:

She Craft Co is a fusion of southern American and Asian all made from scratch. The menu features sandwiches, salads, specialty bowls, and deserts. You can get traditional American foods such as Philly cheesesteaks and BBQ sandwiches, or Asian specialties like kale and bok choy and a garlic ginger-infused jasmine rice bowl. Their goal is to put a little #shemadewithlove into every bite!

Ohio Hog is a family-owned and operated restaurant obsessed with serving quality barbeque. You’ll find delicious family recipes there, which are made from scratch and cooked fresh daily. Their barbeque is smoked and cooked the old fashion way, slow and wood-fired. From chicken to pulled pork to ribs and beef brisket, everything is done right at the Ohio Hog. Catering is also available.

Browse through this Tyrone map for things to do, places to eat, stores to check out, and more!

The median household income in Tyrone is $103,929, which is a 12.9% growth from last year! The city currently employs 3,857 residents. The largest industries in Tyrone are retail trade, educational services, and health care & social assistance. The highest paying industries are wholesale trade, manufacturing, and management of companies & enterprises. Fortunately, only 3.28% of Tyrone’s population lives below the poverty line. The group that is most impacted by poverty in Tyrone is females from 55 to 64.

Those moving to Tyrone will have the choice of some of the best educational resources and services out there. The most popular schools in Tyrone are Robert J. Burch Elementary, Flat Rock Middle, and Sandy Creek High. All of these schools are highly rated for their academic achievement. High school graduation rates are 85%, which is 2 percent higher than the Georgia state average. Many of those students continue their education by entering college or technical school. Many students love to take advantage of the free Tyrone Public Library.

Tips for Living in Tyrone

Are you relocating to Tyrone? Our award-winning Tyrone moving company is here to help and to take care of all your relocation needs. We will ensure that your move is an easy one. Call Wirks Moving & Storage at 404-635-6683 today to get your free quote!