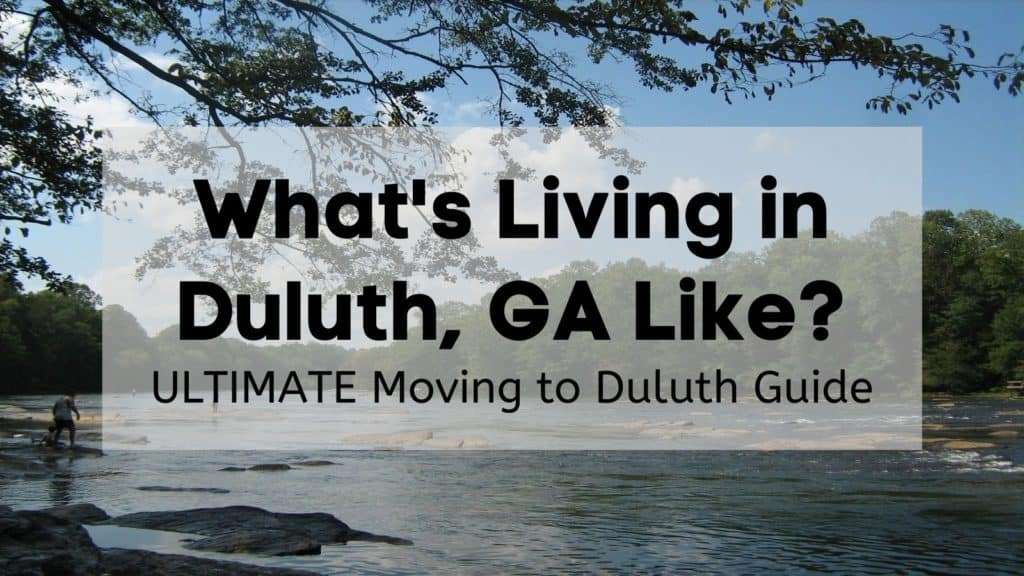 Are you considering moving to Duluth, Georgia? This charming suburb is one of the most desirable places to live in the Atlanta area with affordability, family-friendly amenities, and great schools. Duluth is known for the Infinite Energy Center arena and its many malls that make it a hub for entertainment and shopping.

An Indian trail was extended in 1821 to connect Fort Peachtree (Atlanta) to Fort Daniel (Dacula) and the area of present-day Duluth quickly grew in population. It was known as Howell’s Crossing until 1871 when it got its own railroad station. It was renamed for Duluth, MN after a Kentucky congressman mocked the railroad expansion that also recently expanded into Minnesota as wasteful.

The population of Duluth was still under 2,000 in 1970 when rapid development occurred, including a new arena, convention center, and shopping centers. By 2000, Duluth was home to over 22,000 people.

Today, living in Duluth, GA offers an excellent quality of life and it’s one of the best places to raise a family in Georgia.

The city has a foreign-born population of 33.5%, three times the rate for Georgia. 59% of foreign-born residents are from Asia, 28% are from Latin America, and there are 6% each from Europe and Africa.

The gender ratio in Duluth is skewed: for every 54 females over 25, there are 46 males.

Duluth is a safe place to live with 20% less violent crime than the national average.

Duluth has a highly educated population. 47% of people living in Duluth have at least a bachelor’s degree, far higher than the 38% in the Atlanta metro area.

The city has had a handful of famous residents including actress Raven Symone and Atlanta Braves player Brian McCann.

Duluth Climate – What’s the Weather Like in Duluth, Georgia?

The climate in Duluth is humid subtropical with hot, muggy summers and short, wet summers. The average temperature in Duluth ranges from 41 degrees in January to 78 degrees in July.

You won’t have to worry about snow after moving to Duluth with about 1” per year. Brace yourself for plenty of rain, though! Duluth gets 54” of annual rainfall compared to the national average of 38”.

The best time to visit Duluth, GA is early May to late June and from late August to October. You’ll enjoy the most temperate weather without the intense heat and humidity of July.

A post shared by City of Duluth, Georgia (@city_of_duluth)

While living in Duluth, you’ll be served by the highly rated Gwinnett County Public Schools, America’s 14th largest school district. GCPS has been a finalist three times and won the Broad Prize two times, earning $1.75 million in scholarships for GCPS students. It was also the first winner of the Great Districts for Great Teachers (GDGT) initiative by the National Council on Teacher Quality and District of the Year among large national school districts.

Students can also attend one of four private schools in Duluth including Notre Dame Academy and the Duluth Montessori School.

All students can enjoy the free services of the Duluth Public Library.

Best Neighborhoods in Duluth, GA | Where to Live in Duluth

What type of lifestyle do you want to enjoy while living in Duluth, GA? You’ll find exciting neighborhoods for everyone from million-dollar country club homes to affordable neighborhoods in Duluth for families. Here are the top communities to consider.

Sugarloaf Country Club – One of the Most Desirable Gated Communities in Duluth, GA

Sugarloaf Country Club is one of the best places to live in Duluth if you want to be near amenities and entertainment. You’ll find a range of beautiful, luxury homes in the neighborhood with stunning Georgian, French Country, and Mediterranean design. The community is anchored by TPC Sugarloaf, a private country club with upscale amenities and a Sports Center with fitness facilities, tennis courts, and three pools.

Looking for an upscale community where you can actually get to know your neighbors? Stonebrier at Sugarloaf is a popular neighborhood with large homes with stone and brick exteriors. The HOA is very active with regular neighborhood events and community amenities that include a swimming pool and waterslide, tennis courts, and a residents-only park.

What Is the Cost of Living in Duluth?

Is Duluth, GA expensive? A good place to start is the Duluth cost of living index which is 102. That makes Duluth just 2% more expensive than the national average and 6% above the Georgia average making Duluth an affordable city to live in.

Most living expenses are right around average for the U.S. except healthcare, which is 8% lower, and housing, which is 8% higher.

The average home price in Duluth is $386,000, up 25% from 2020 to 2021. Duluth is definitely a seller’s market with 63% of homes in the last year selling for more than list price. You can see Duluth, GA homes for sale here to see just how far your budget takes you.

How much do you need to earn to live in Duluth, GA? The average salary is $62,000 with an average hourly rate of $16.79 according to Payscale. In the first quarter of 2021, wages trended upward 1% while the cost of living trended downward 7%!

Here is the average pay you can expect in common occupations.

Downtown Duluth has a large business district with plenty of employment opportunities. Major employers in Duluth, GA include:

Fun Things to Do in Duluth, GA

Want things to do in Duluth with kids? Hit the lake or go swimming at one of several pools. Ready for an exciting date night? Catch live music or sports in the Gas South District.

While living in Duluth, you’ll enjoy tons of opportunities for outdoor recreation with seven excellent city parks, an aquatics center, hiking trails, and recreation on the Chattahoochee River and Berkeley Lake.

That’s not all you have to look forward to, however, with one of the region’s best arenas, top-notch shopping, and a bustling downtown area. You can explore several shopping centers such as Gwinnett Prado Shopping Center, Park Village Shopping Center, Gwinnett Marketfair, Santa Fe Mall, and Mall Corners Shopping Center for everything you need within a few miles of home.

Here are some of the top Duluth, GA points of interest.

The Gas South Arena is the largest arena within the “Gas South District” of Duluth that also boasts a performing arts center. This 13,000-seat arena is the home of the Atlanta Gladiators and hosts everything from concerts to sporting events and ballet.

Enjoy some pampering at Duluth’s Jeju Sauna, a traditional Korean bath house and spa. Admission is just $30 for adults with affordable space services that make it ideal for relaxing after a long week.

This large community park and fitness area is one of the best things to do in Duluth for families. With a lake, lighted baseball fields, a football field with a lighted walking path, playgrounds, and an activity building with classes, you’ll never be bored with Shorty Howell Park around the corner.

You’ll enjoy a bounty of amazing cuisine after moving to Duluth, GA! From Southern comfort food to authentic Korean and Japanese cuisine, here are some of the best restaurants in Duluth.

Does settling down in Duluth, GA sound perfect? Once you’ve narrowed down your options and chosen a neighborhood, give the trusted Duluth movers at Wirks Moving & Storage a call. We’re ready to make moving to Duluth easier than you ever imagined!