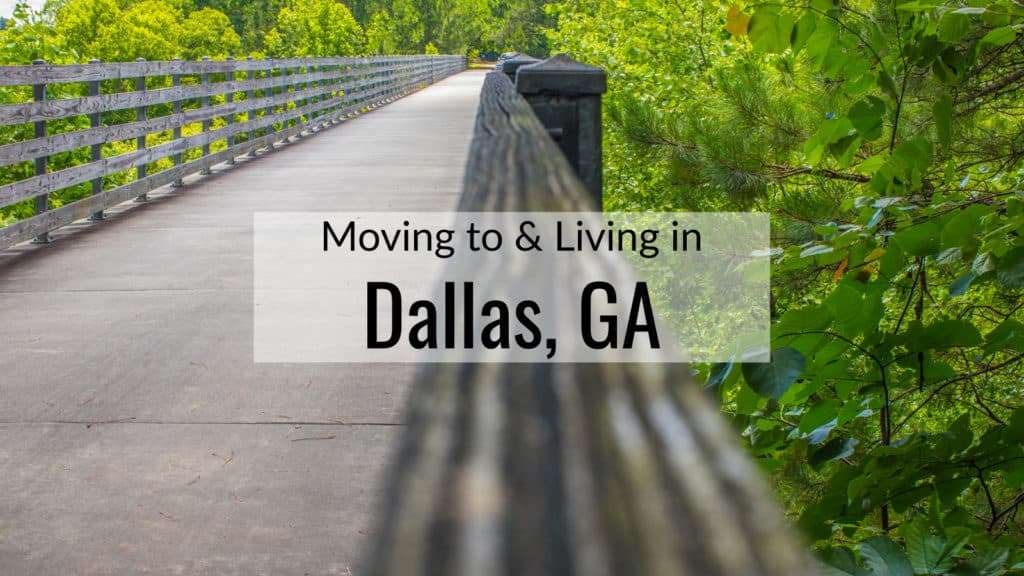 No, not that Dallas! Located 38 miles northwest of Atlanta’s downtown in Paulding County, Dallas is a beautiful and historic little suburb which was listed as one of the “Best Places to Live” in America by CNN and Money Magazine in 2007. This suburb is a historic area, originally settled during the Georgia Gold Rush in 1828, when people disappointed by the relatively small amount of gold in the area instead began to settle and grow crops, forming the basis for Atlanta and Dallas itself. Dallas was created officially from forty acres of land purchased by Garret H. Spinks in 1852, and would be home to several battles during the American Civil War. Dallas survived through the Civil War, flourished during reconstruction, and is now one of the very best suburbs in Georgia!

Dallas takes up about seven square miles, and has a population of 13,014 with about 1,300 people per square mile. Dallas is a very young little town, with an average age of 31.4, lower by a significant margin than Georgia’s average age of 36.5. However, if you’re older, you won’t have to worry about not finding social groups around your age in Dallas. The demographics in Dallas, GA are fairly typical of the area, with over 50% of the community being white, while 35% of the population is black. There are other ethnic communities in Dallas as well, meaning this area is very diverse.

Cost of Living in Dallas, GA

Those thinking about moving to Dallas will be glad to know that Dallas has a lower cost of living than average, being 7% lower than that of the U.S. Housing in Dallas is 23% less expensive than the American average, with the average home price in Dallas being $148,500, and utilities is 17% cheaper. However, you can expect to pay slightly more for groceries, about 3% more than usual. Rent is similarly very inexpensive in this area, coming out to an average of $1,161 per month.

If you’re looking for a place that’s affordable but also has all the accommodations of a nice suburb, Dallas is the place to be!

If you’re living in Dallas, you’ll have access to some of the very best schools in Georgia! Dallas is served by the Paulding County School District, of which 88% of schools are rated “Average” or above on Great Schools. Additionally, the Paulding County School District also hosts events, summer camps, and more to enrich your child’s learning experience. There are plenty of top-rated K-12 schools in Dallas, GA, including but not limited to institutions like Roland W. Russom Elementary, East Paulding Middle School, and East Paulding High.

Dallas, like the rest of Georgia, is humid and hot. The summer month highs usually go up to around 95 degrees Fahrenheit, while the winter month lows are generally around mid-30 to low-40 degrees Fahrenheit. If you’re planning on visiting Dallas, GA, you’d be best off visiting during April or October, when the weather is the most comfortable. Dallas has significantly more rain than average, with 53 inches compared to the US standard of 38, but you can be assured you’ll very rarely see a flake of snow while living here, because Dallas only gets two inches of snow annually!

Being only seven square miles big, Dallas is so compact that there’s hardly any reason to differentiate it into different communities. In a way, the top neighborhood in Dallas is Dallas itself! Although this might limit your options in terms of finding a community tailored to your tastes, you’ll find that living in a small, tight-knit community like this will have benefits all it’s own.

Even if the choices in neighborhoods are limited, there’s still plenty of great, affordable homes for sale in Dallas! Check out some of Dallas’ real estate here.

Those looking to make a living in Dallas, GA will be thrilled to hear that wages have been increasing and cost of living has been decreasing! In terms of economy, there’s few places better to be than Dallas! The most prolific employers in this little town are the WellStar Health System, Kroger, and Publix, and the most popular positions are cashier, registered nurse, and teacher’s assistant. The average hourly wage in Dallas is $14.96, while the average yearly salary is $57,000.

If you want to make money in Dallas, as is true in many places in the United States, the best answer is the healthcare industry. You might also wish to look into teaching, or sales. If you’re curious about open jobs in Dallas, GA, you can take a look at listings here.

Things to Do in Dallas, GA

Dallas might be small, but by no means does that mean it doesn’t have anything to do!  Aside from the basic shopping, like what you might find at the Paulding Plaza Shopping Center, there are plenty of fun attractions in Dallas and nearby for a fun time with your friends and family.

Pickett’s Mill is one of the best preserved Civil War battlefields in America. See the ramparts built by Confederate and Federal troops, tour an authentic 1800s pioneer’s home, and see original cannons, guns, and uniforms of the troops who fought and died at this important battle in American history.

The Silver Comet Trail is a non-motorized trail which winds through several counties, Paulding included. Open to all hikers, bikers, wheelchairs, and horses, it’s a peaceful walk with plenty of scenic views of Georgia.

Places to Eat in Dallas, GA

Not to be outdone by its fun things to do, there’s also plenty of fantastic restaurants in Dallas as well! Check out just a few of Dallas’ great eateries below.

A hole-in-the-wall BBQ place on Memorial Drive, this little joint is sure to blow your socks off with a great variety of dishes. It may say BBQ in the name, but don’t think that means that’s all they serve! Great breakfasts, lunches, and dinners of all kinds!

Tips for Moving to Dallas, GA

Ready to take the plunge, and make Dallas your new home? Wirk’s Moving’s expert Dallas, GA moving team can get you settled in no time!