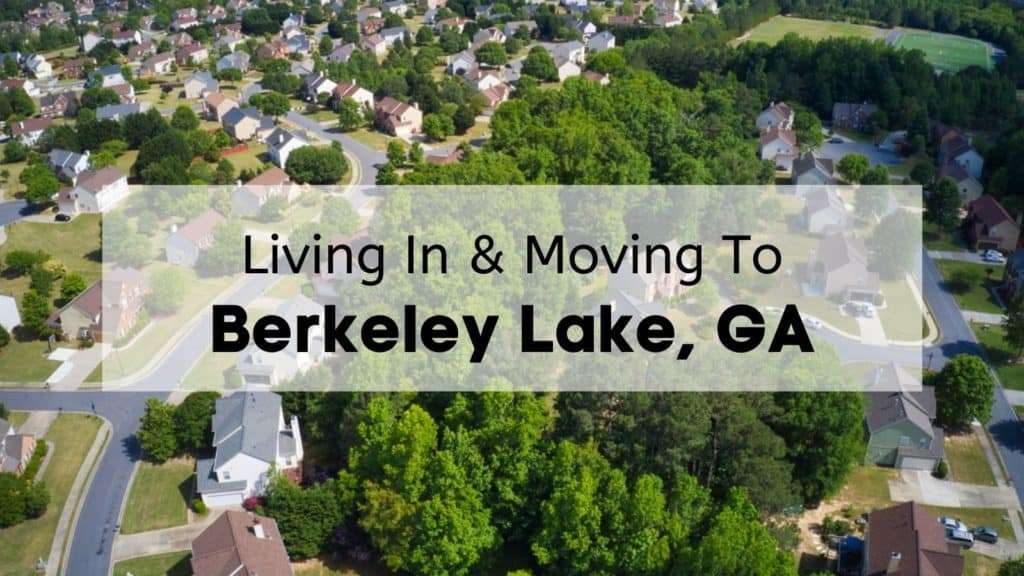 Situated in Northern Georgia around a glossy lake is the historic city of Berkeley Lake. The city was named after Frank Coggins’ Berkeley Blue Granite Quarries since Mr. Coggins was the first to start developing the land there. For many years, Berkeley Lake was mainly a summer retreat where people would go to fish during the warm weather with a slowly growing number of permanent residents. Since then, Berkeley Lake has grown immensely and is known to be one of the best places to raise a family in Georgia. Luckily, Berkeley Lake’s residents feel safe in their communities thanks to the city’s crime rates being 85% lower than the national average. People quickly grow to love the city thanks to the rural culture and the pretty outdoors that allows Berkeley Lake’s residents to have a fun time fishing, hiking and boating.

There are plenty of nice neighborhoods to choose from in Berkeley Lake, so you’re bound to find one you’ll love. The most popular neighborhoods around Berkeley Lake are Scotts Mill, Berkeley Manor, Howell Wood, and Berkeley Lake Estates. Scotts Mill has a variety of styles of homes with varying sizes, so there are many families, young adults, and retirees living there. Berkeley Manor features midsize homes that are very fairly priced. This neighborhood isn’t too far away from any of the nearby public schools, which is definitely a bonus for families that are sending kids to school. Howell Wood is a beloved neighbor that has bigger homes available for the many older adults and families that are compelled to move to this area. This neighborhood is gorgeous with several blossoming trees and plants that really make Howell Wood’s environment so magical. Fortunately, Howell Wood is right off the freeway, making it convenient for residents that want to travel to bigger cities for work or other entertainment. Berkeley Lake Estates is surrounded by the Berkeley Lake, which adds a nice scenic view to their property.

Many people decide to relocate to Berkeley Lake to avoid the cold. The summers in Berkeley Lake are hot and humid with highs of 90°F and lows of 70°F. Meanwhile, Berkeley Lake’s winters are cool and short with an average high temperature of 59°F and low temperature of 38°F. With Berkeley Lake’s humid subtropical climate, the city gets about 54 inches of rain a year, which is 16 inches more than the national average. However, the city doesn’t usually get cold enough for it to snow, so you don’t ever have to worry about getting caught in a snowstorm. Many residents love spending time outdoors on trails or at parks year round thanks to Berkeley Lake’s pleasant climate.

Things to Do in Berkeley Lake, GA

Wanna get out and about around Berkeley Lake, GA? No worries, we’ve found the top-rated activities in Berkeley Lake for you down below:

Looking somewhere fun to take the kids? This place has an exciting outdoor pool with water slides and a lazy river that has any young kid running to jump in! There are also options of swimming lessons to teach your youngsters to be safe around water or a swim team that will help your child master their strokes. You could also plan a delicious picnic with the various picnic areas in the park and aquatic center.

Whether you want to take a dip in the water or go fishing, Berkeley Lake is the place to be! This swim area is run by a private HOA, so you’ll need a passcode to get in. This is a popular attraction for kids in Berkeley Lake in the summertime.

Berkeley Lake also has some nice shopping areas nearby, including Berkeley Corners Shopping Center, The Shops at Berkeley Lake, and Tree Summit Village.

Additional Things To Do Near Berkeley Lake

Wondering where to go when your stomach starts to rumble? Check out the most popular restaurants in Berkeley Lake below:

If you’re someone who likes to try new things, this unique Indian restaurant is a must-try! This restaurant serves pizza, biryani, rice bowls, shakes, and smoothies while fusing Indian flavors to add a punch! Rice n’ Pie has several raving reviews that compliments the flavor of the food and friendliness of the staff, which is what makes the customers come back for more!

Craving classic American cuisine? If so, you’ll want to make sure to stop by Sunny Wings! With options of wings, philly cheese steak, chicken tenders, fried rice, and more, there is something tasty for everyone here!

The median household income in Berkeley Lake is $131,339. The city currently employs 1,072 people with the largest industries in Berkeley Lake being retail, professional and scientific services, and health care. The highest paying jobs in Berkeley Lake are found in finance, real estate, and information. Most residents in Berkeley Lake have an average commute time of 27.5 minutes, however some travel a bit further to big cities like Atlanta for other great job opportunities. If you’re planning to commute to Atlanta, you can find directions from Berkeley Lake, GA to Atlanta, GA here, which is 25 miles away.

Many people decide to relocate to Berkeley Lake for its highly rated schools. The most popular schools in Berkeley Lake are Berkeley Lake Elementary School, Duluth Middle School, Duluth High School, and Gwinnett School of Mathematics, Science, and Technology. All of these schools are complimented for their student’s test score and progress. There are also great private schools to choose from nearby, including Wesleyan School and Woodward North. These private schools are perfect for any student that will succeed better with increased individual attention and smaller class sizes.

Ready to make the move and call Berkeley Lake your new home? If so, you’ll want the help from our reliable Berkeley Lake moving company, Wirks Moving, to get you there! Call us today at 404-635-6683 for a free quote!