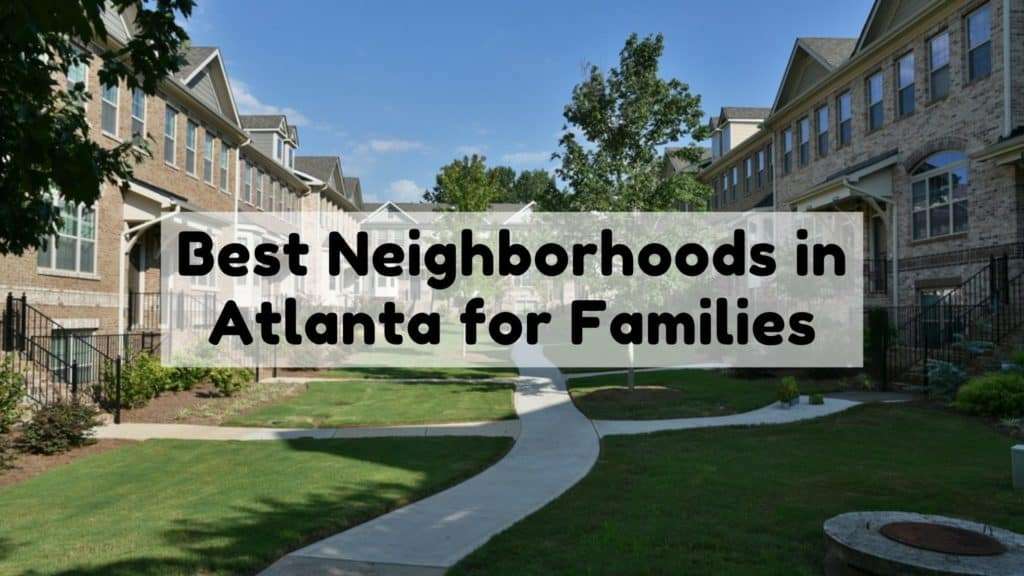 As the largest city in Georgia, Atlanta is one of the most beloved cities across the state. Known by many nicknames such as The Big Peach, The Big A, A-Town, and Hotlanta, this great city is also recognized for its comfortable, safe, and family-friendly Atlanta neighborhoods.

Atlanta is home to an ever-growing population of about 456,378 residents. City demographics show it’s made up of about 52% Black or African American, 37% Caucasian, 4% Hispanic or Latino, and 4% Asian. People living in Atlanta have a median household income of $49,398.

Additionally recognized for its southern hospitality, great music, and popular family communities, Atlanta has so much to offer the people living there. But what are the best neighborhoods in Atlanta for families? Where should you live in Atlanta?  Well… here you go!

Among the top Atlanta neighborhoods for families, the area of Lake Claire offers a nice place to live that is both safe and comfortable. The community is home to about 566 children under the age of 18, adding up to about 21% of the neighborhood population.

Local kids attend schools that can be found in this area including the reputable Charles R. Drew Charter School. Some of the best things to do in Lake Claire are visiting the Children’s Museum of Atlanta, the location known as Sun in My Belly, as well as going shopping at the Briarcliff Plaza Shopping Center.

The beautiful Atlanta community of Chastain Park is known for many things but near the top of the list is its easy access to some of the best schools in the city. Younger children in this area will likely attend Jackson Elementary School and then Sutton Middle School. From there, kids head to Riverwood International Charter School, which is one of the best high schools in town, or to North Atlanta High School.

This highly affluent Atlanta neighborhood has a population of about 760 local children under 18 years old, which is nearly one-third of the people in the area. Residents of Chastain Park enjoy nice amenities such as Chastain Memorial Park and the Lenox Marketplace, along with great places to eat like Fellini’s Pizza.

With a highly popular attraction called Candytopia in Brookhaven, it’s easy to see the reasons why this neighborhood is one of the top communities in Atlanta. The area also has other things to do at Town Brookhaven and nice restaurants such as the Italian eatery called St. Cecilia.

There are about 388 children living in Brookhaven with some of them attending the local Lakeside High School. Homes in this Atlanta neighborhood are considered some of the best in town with great options for families.

As with any neighborhood close to downtown Atlanta, Candler Park gives its residents quick access to everything there is to do in the busier part of town. Among the top attractions near Candler Park, you’ll find the Georgia Aquarium, Centennial Olympic Park, the Edgewood Retail District, and the famous World of Coca-Cola. You can always stop for a bite to eat at one of the local restaurants such as Lazy Betty.

Candler Park offers a reliable education system with campuses like Wesley International Academy along with Kipp South Fulton Academy School a few minutes away. Candler Park is also the closest Atlanta neighborhood on this list to the highly-respected Georgia State University.

5. Peachtree Heights East – One of the Top Neighborhoods in Atlanta for Families

As one of the most beloved communities in the city of Atlanta, Peachtree Heights East is one of the most desirable parts of town for families. The neighborhood has a strong education system with local campuses including Brandon Elementary School and Kittredge Magnet School.

Although Peachtree Heights East only has about 240 kids living in the area under the age of 18, it is still about one-fourth of the community’s population. Local residents can find plenty of enjoyable things to do nearby such as shopping at Buckhead Village District, visiting the Morningside Nature Preserve, or grabbing a meal at 26 Thai Kitchen & Bar.

Named for the Atlantic Station shopping center, this community is a wonderful place to live for people searching through the best Atlanta neighborhoods to choose from. Residents can visit the incredible exhibits at the High Museum of Art and then stop for a slice of pizza over at Antico.

Local students in Atlantic Station can attend the top-rated program available at Grady High School. From there, new graduates will be right next to secondary schools like the Georgia Institute of Technology, Georgia State University, and Clark Atlanta University. Atlantic Station is one of the most cost-friendly family neighborhoods in Atlanta, making it the perfect place for new couples who are ready to settle down.

7. Argonne Forest – Most Affluent Neighborhood for Families in Atlanta

Though it is one of the smaller Atlanta communities on this list, Argonne Forest is known far and wide for its extravagant homes and upscale lifestyle. Depending on their age, children living in Argonne Forest attend either Sutton Middle School or North Atlanta High School.

Families will love all the great things to do in this Atlanta neighborhood including the Swan House at Atlanta History Center and the Buckhead Market Place. One of the top places to eat in Argonne Forest is Chops & Lobster Bar.

More than 20% of the people living in Morningside-Lenox Park are kids under 18 years old, adding up to about 1,703 children. These families are happy to live in a safe Atlanta neighborhood that has a lot going for it. Morningside-Lenox Park is home to the Atlanta Botanical Garden as well as the Midtown Promenade shopping center.

The area is particularly for parents who have younger kids with nearby schools such as Morningside Elementary School and Inman Middle School. If your family is in the mood for eating out any nights, one of the most popular diners in the community is La Tavola Trattoria.

Map of Family Neighborhoods in Atlanta

Ready to Find the Top Atlanta Family Neighborhood for You?

With so many great family communities in Atlanta to choose from, you may have a hard time deciding which one is right for your needs. Regardless of which one you pick, you and your kids are sure to enjoy the many amenities and fun things to do in the best Atlanta neighborhoods.

Need help with your transition to your new Atlanta community? Give Wirks Moving a call today at (404) 635-6683 to hire our friendly Atlanta movers! Or complete our Request a Quote form to get a free Atlanta moving estimate!

Reynolds Nature Preserve is one of the most popular nature preserves in the state of Georgia. This protected forest area covers 146 acres and features

Auburn is a quaint little city located in northwest Georgia. As a suburb of Atlanta, the charming city of Auburn is known for its huge

Your day-to-day life can be pretty hectic. You’re always on the go, and it can be tough to find time to relax. But when you 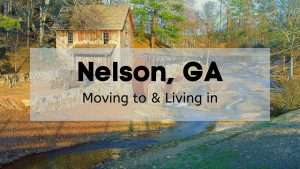 Nelson, named for early landowner and farmer John Nelson, who used to live in the area, is a middle-class suburban city (despite its small population!)