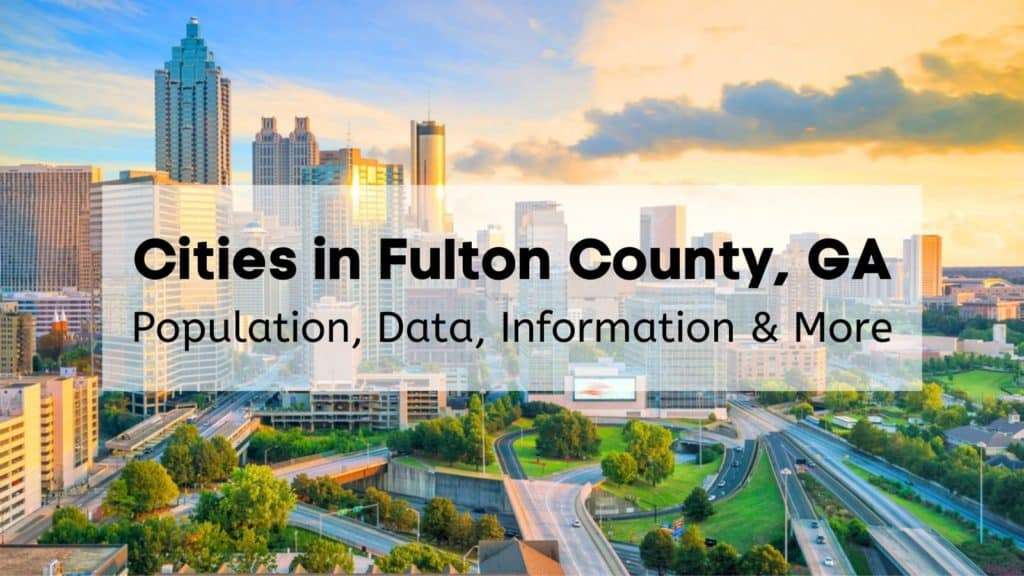 Fulton County is the largest county in Georgia by population and ranks among the top 50 largest counties in the United States. As home to the state capital and many other nice areas, it is a wonderful place to live with a lot going for it. There are plenty of great cities in Fulton County for families, retirees, and everyone in between.

Known for its growing economy and upscale living, Fulton County has become a hub for major corporations and is home to multiple wealthy communities.

Anyone who is considering moving to Fulton County cities can use data from the US Census to get more information about each area, its benefits, and what it’s like to live there.

As you get details about local cities in Fulton County, it’s a good idea to know the area’s overall demographics beforehand.

As Georgia’s most populated county, you’ll be happy to learn more about what it’s like living in Fulton County and the cities that are found in the area.

Centrally located in Fulton County, Atlanta was incorporated on December 29, 1847, and is the state capital of Georgia. Atlanta is best known for hosting major companies, fun attractions, and a great arts scene.

The culture for people living in Atlanta is definitive of southern hospitality as residents are generally friendly, helpful, and kind to one another. There is a high level of diversity in the city with demographics made up of about 48% Black or African American, 39% Caucasian, 5% Asian, and 5% Hispanic or Latino. 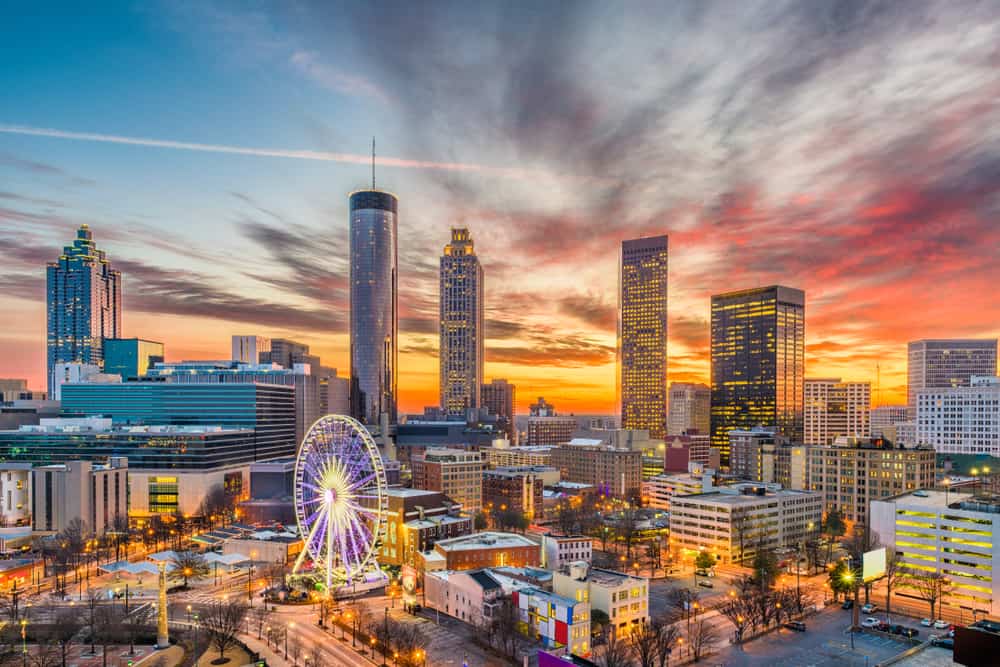 Some of the best things to do in Atlanta include fun places to visit like the Georgia Aquarium and the World of Coca-Cola.

With its strong economy, Atlanta jobs can be found at many great places to work including The Home Depot, UPS, Delta Air Lines, and The Coca-Cola Company.

Local schools in Atlanta offer good education programs for kids and teens at campuses like Charles R. Drew Charter School, Brandon Elementary School, and Atlanta Classical Academy. The main colleges in Atlanta are Emory University, the Georgia Institute of Technology, and the University of Georgia.

Located about 16 miles north of downtown Atlanta, the city of Sandy Springs was founded in 2005 and has quickly grown into a thriving community.

As a popular hub for local businesses and large corporations, Sandy Springs plays host to the headquarters of companies like Cox Communications, Morrison Management Specialists, and Mercedes-Benz USA.

This business culture has made Sandy Springs one of the most popular cities in Fulton County for people to work and live.

A couple of the most popular attractions in Sandy Springs include activities at the Morgan Falls Overlook Park as well as the Abernathy Greenway.

Established back in 1839, the city of Roswell can be found about 22 miles north of downtown Atlanta.

Roswell is known for its massive 640-acre Historic District, which features three house museums that teach visitors more about the area’s 19th-century history. It rests along the north side of the Chattahoochee River, which offers people living in Roswell access to many outdoor activities such as local trails, marsh boardwalks, and bike paths. 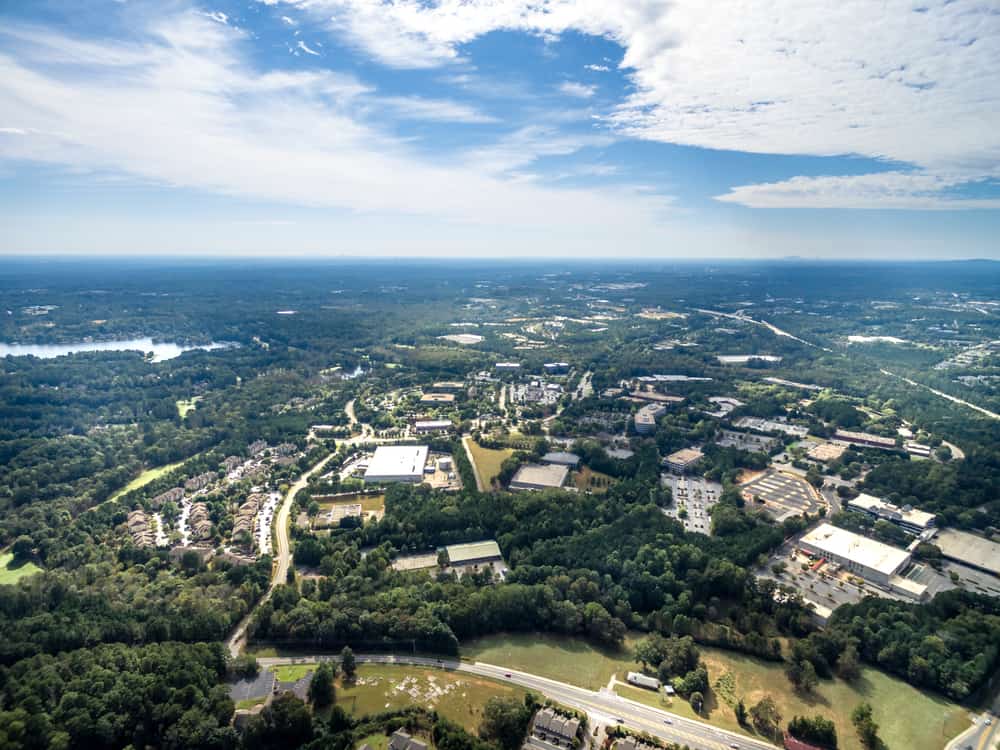 Residents in the area enjoy a variety of fun things to do in Roswell including top-rated destinations like the local Riverside Park and the Chattahoochee Nature Center.

The best schools in Roswell for local children are Sweet Apple Elementary School as well as Roswell High School.

Some of the best places to work in Roswell include Andritz AG, Royal Oak Enterprises, and Boral Industries.

About 27 miles northeast of Atlanta, Johns Creek is an affluent city with many great amenities and local features. The community was incorporated in December 2006.

Johns Creek is known for being the wealthiest city in Fulton County and all of Georgia with a median household income of $151,773 per year. The kid-friendly culture in Johns Creek has also made it one of the best cities in Fulton County to raise a family.

People of all ages can find plenty of entertaining things to do in Johns Creek such as the Autrey Mill Nature Preserve & Heritage Center as well as Catch Air.

The city of Alpharetta was incorporated on December 11, 1858, and is located between Roswell and Johns Creek.

Alpharetta is ranked 8th among the safest cities in Georgia, making it a great choice for people who want a quiet, family-oriented lifestyle.

Newcomers moving to Alpharetta will find the community is known for its popular music attractions such as the Ameris Bank Amphitheatre, which features live shows from famous singers and bands. 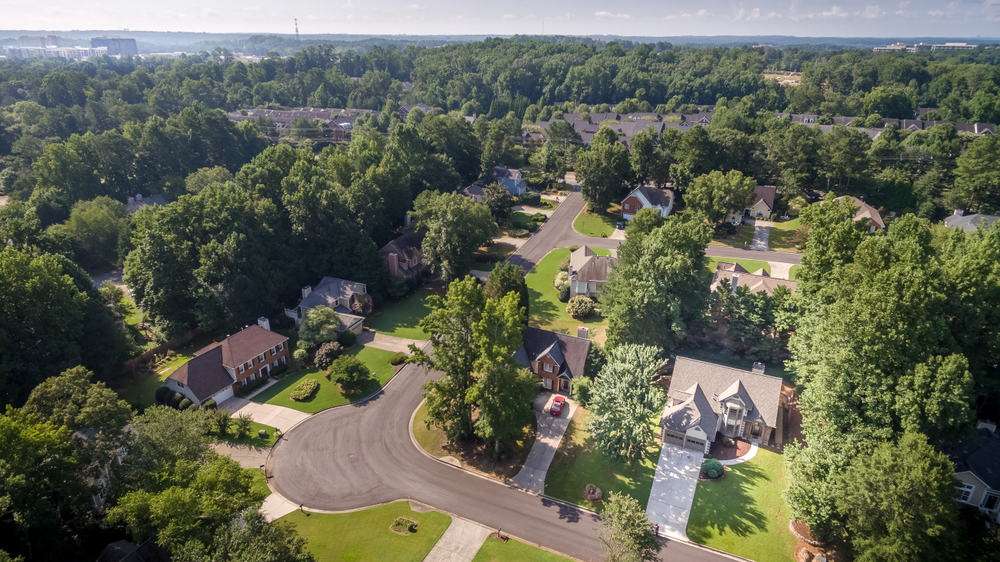 The top schools in Alpharetta include State Bridge Crossing Elementary School and Alpharetta High School as well as Chattahoochee High School, which is ranked among the top 10 high schools in Georgia.

If you’re looking for jobs in Alpharetta, a few of the best places to work are Halyard Health, Thyssenkrupp Elevator, AGC America, and LeasePlan.

Once you’ve relocated to the area, you’ll find the most fun activities in Alpharetta include Wills Park Recreation Center and Avalon.

The wealthy city of Milton was founded on December 1, 2006, and can be found about 5 miles north of Alpharetta. Ranking as the safest city in Georgia, Milton has the lowest crime rate in the entire state.

Milton is best known for its rural atmosphere and history of equestrian backgrounds. As another one of the most affluent cities in Fulton County, Milton’s downtown is evolving into a thriving hub as the area continues to grow.

It’s easy to discover fun things to do in Milton with great activities nearby such as the Scottsdale Farms Garden Center and the local Bell Memorial Park.

The area offers residents plenty of options when it comes to family-friendly neighborhoods as well as reputable schools like Cambridge High School.

About 7 miles southwest of downtown Atlanta, the city of East Point was founded in 1870 and has since grown into a pleasant, middle-class community.

East Point is known for its history as a center for grain crops as well as cotton. It is now considered a resort area for people who want to escape the big city and enjoy some quiet relaxation. 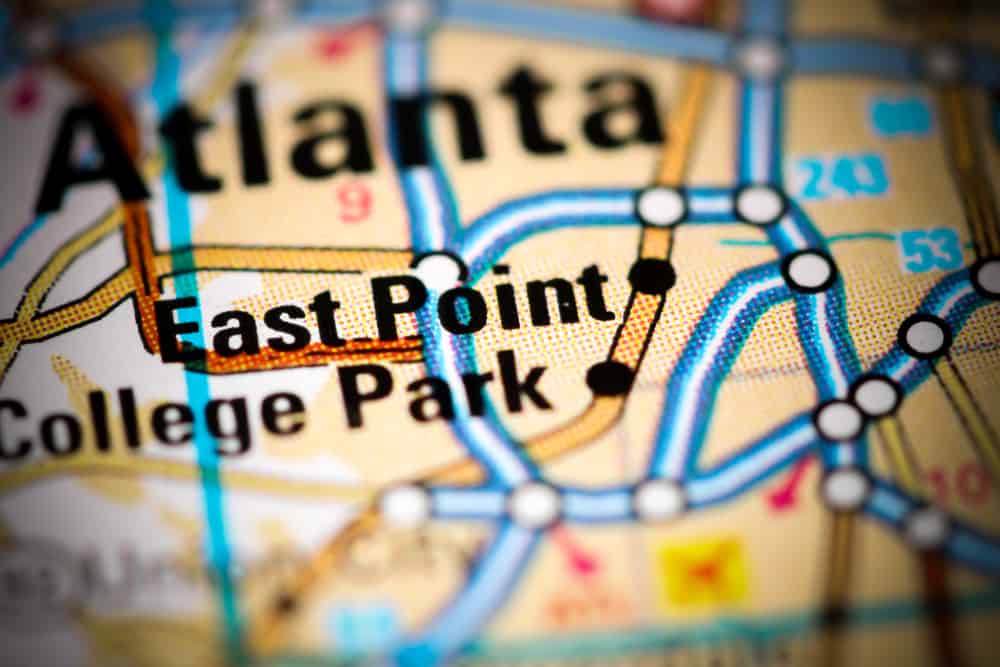 As a nice suburban city, East has plenty of places to shop as well as top-rated restaurants like Louisiana Bistreaux Seafood Kitchen and Kupcakerie

For families relocating to the area, the most trusted school in East Point is Resurgence Hall Charter School.

Union City was established in 1908 and is located approximately 17 miles southwest of downtown Atlanta.

The culture in Union City offers all the benefits and economic opportunities of a major metro area but with a small-town feel.

The area of Union City is best known for the role it has played in recent movies and television series as a filming destination. As one of the most beautiful cities in Fulton County, local outdoor areas have been featured in films like the new Jumanji movies, Pitch Perfect 3, and The House with a Clock in Its Walls.

One of the best places to visit in Union City is the local Ronald Bridges Park. If you’re ever looking for a great restaurant in the area, make sure you check out The Historic Green Manor Restaurant.

Fairburn is a pleasant city in Fulton County that can be found about 22 miles southwest of Atlanta. The community was incorporated in 1830 and has seen steady growth since the 1970s. 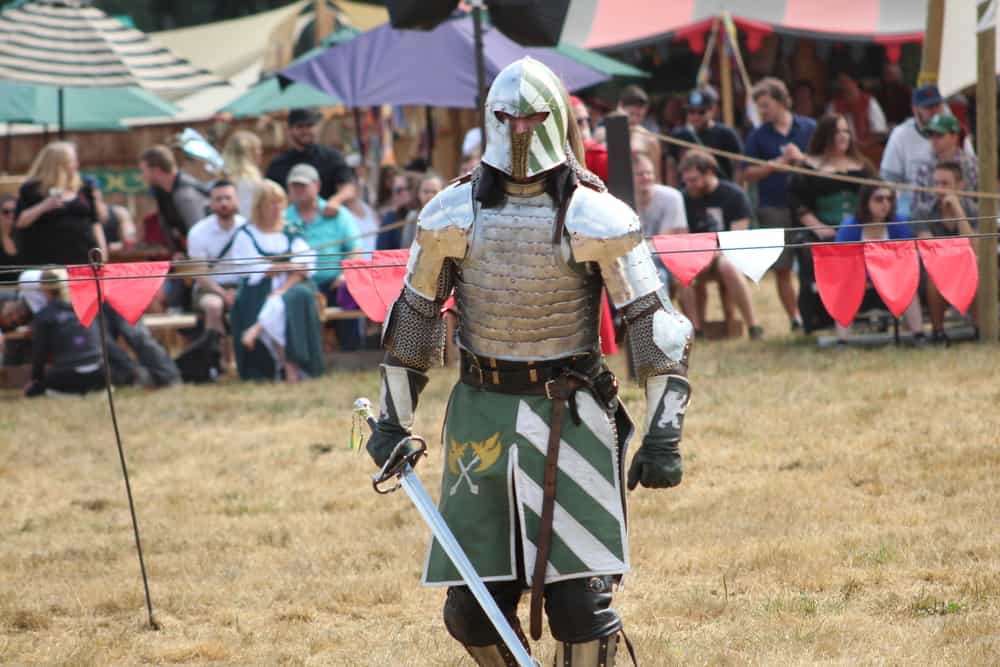 The city of Fairburn is known for being the location of the widely popular Georgia Renaissance Festival. It also plays host to the seasonal Fairburn Festival during fall, which features local cuisine, unique vendors, live music, and a parade. Duncan Park is another one of the most popular places to visit in the city.

There is an inviting culture in Fairburn for millennials and younger generations, which has made it a popular place for people under 30 years old.

College Park is conveniently located about 9 miles southwest of Atlanta. The city was incorporated on March 6, 1856, and has seen its population rise and fall over time.

The area of College Park is recognized for having the fourth-largest urban historical district on the Georgia National Register of Historic Places.

Locals in College Park enjoy access to fun activities at destinations such as Charles E. Phillips Esquire Park and the Georgia International Convention Center. Many people also like to visit Gateway Center Arena, where they can catch games for the Atlanta Dream WNBA team as well as the College Park Skyhawks NBA G League team.

Here is a complete list of cities in Fulton County, sorted first by population, then other metrics from the US Census. Education Level is the % of the population that has finished high school. The Population Growth is from 2010 to 2019. If they exist, under Type, we have included cities, towns, villages, census designated places and more.

Map of Cities in Fulton County

How many cities are there in Fulton County?

There are 15 incorporated cities in Fulton County.

What is the most populous city in Fulton County?

Atlanta is the largest city in Orange County with a population of 488,800 residents.

How many people live in Fulton County?

Which of Fulton County’s Cities is Right for You?

Now that you know the most important details about local cities in Fulton County, it’s going to be easier to choose the community that is right for you. The team at Wirks Moving is here to help with your relocation as soon as you know the city you’d like to move to. Give us a call at (404) 635-6683 or complete the Request a Quote form for a free moving estimate!

Please confirm deletion. There is no undo!