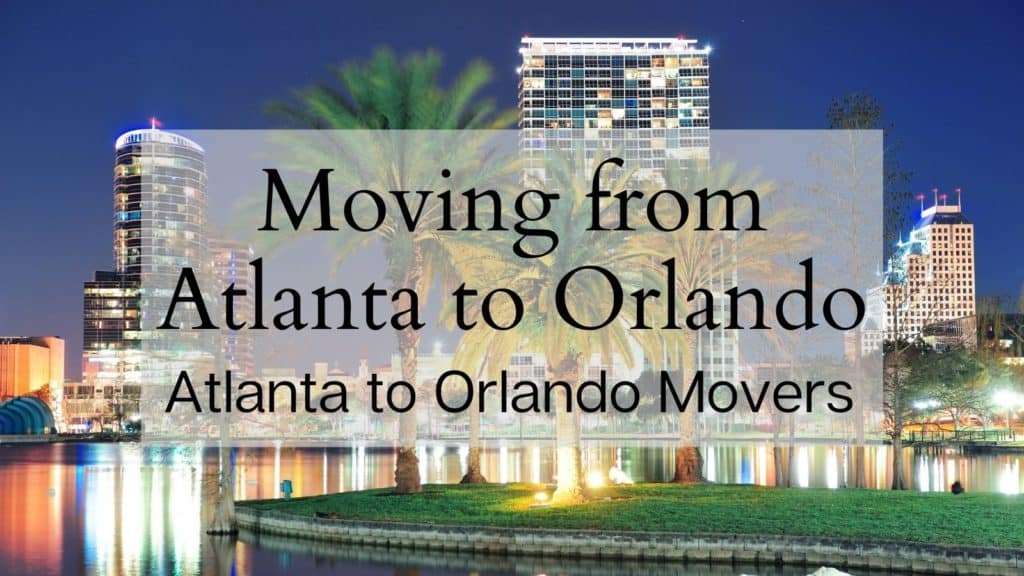 As you consider moving from Atlanta to Orlando, FL, you aren’t alone. Orlando is growing rapidly and expected to add an impressive 1,500 residents every week through 2030! Located in Orange County in Central Florida, Orlando is one of America’s fastest-growing cities with residents moving here for its affordable living and excellent job opportunities.

The City Beautiful has so much to offer but planning a long-distance move can be stressful. Here’s what you can expect when moving from Atlanta, GA to Orlando, FL and how professional Atlanta to Orlando movers can help you relocate to the Sunshine State.

The culture of Orlando is very different than its oceanside neighbors like Miami! Orlando is known for Disney World and Universal Orlando Resort, but it also boasts amazing outdoor attractions like golf courses and parks plus a bustling nightlife. While living in Orlando, you won’t need to worry about hurricanes because you’re far enough inland – but the beaches are still easily within reach! While Orlando’s identity is tied to tourism and its theme parks, it also has a strong arts and culture scene you’ll love exploring.

Benefits of Moving from Atlanta to Orlando

What’s prompting you to consider moving from Atlanta to Orlando, Florida? Are you in search of a better climate, a better job, or just affordable living near the beach? Here are some of the top benefits of moving to Orlando from Atlanta, Georgia.

Lower Cost of Living in Orlando Versus Atlanta

The average salary in Orlando is $63,000 compared to $69,000 in Atlanta, according to Payscale. However, rent is 20% lower in Orlando, consumer prices are 11% lower, and groceries are 18% lower according to Numbeo.

Atlanta definitely boasts a great economy, but Orlando is the second-best city for job seekers according to Indeed – 12 spots ahead of the ATL! Orlando also offers a better work-life balance and outperforms 98% of other cities in areas like job advancement.

Less Traffic in Orlando vs Atlanta

One of the biggest complaints people have living in the ATL is the traffic. Atlanta traffic is among the world’s worst and a common source of frustration for commuters. After moving to Orlando, you’ll appreciate far less congestion, especially if you stay away from Disney World. Orlando is even ranked as one of the best American cities to drive in!

The Beach Is an Hour Away While Living in Orlando

One of the perks of moving to Orlando? Amazing beaches are just an hour away! During the summer, you can head to Daytona Beach or Cocoa Beach after work to unwind and soak up the afternoon sun.

Atlanta’s definitely warm, but it still gets a tiny bit of snow and lows in the 30s and 40s during the winter. The Orlando climate is much warmer: often about 20 degrees warmer than Atlanta in the winter with highs in the 90s during the summer.

There are some things you will need to get used to after relocating from Atlanta to Orlando. There’s less humidity when you compare Atlanta vs Orlando, but Orlando’s heat can take some getting used to. Orlando drivers are also notorious and complaining about other drivers is a popular pastime in Florida.

Even moving across town can be daunting enough, but an upcoming long-distance move to another state can leave you feeling overwhelmed. Professional Atlanta to Orlando movers can pitch in and take care of all the physically challenging and stressful elements of your move so you can focus on everything you have to look forward to in Orlando.

Want to ditch the worry, back pain, and chaotic moving day when moving to Orlando? Here’s how a professional Atlanta to Orlando moving company can help.

Who wants to spend weeks packing, an entire day on grueling physical labor, then wake up early for a 6-hour drive? Moving from Atlanta to Orlando is easy with the right help on your side.

You have many options when hiring a moving company to move from Atlanta to Orlando. As you consider your options, make sure you choose movers you can trust to safely deliver your belongings without unexpected surprises, delays, or hidden costs.

Wirks Moving & Storage has more than 10 years of experience in the industry with over 10,000 customers served. We’re proud of our low claims rate and commitment to delivering on our core values of accessibility, dependability, and transparency. We’re a Certified ProMover and a preferred mover for many top real estate agencies. We have earned hundreds of 5-star reviews on Google and Facebook!

How much do Atlanta to Orlando movers cost? We can’t give you an easy answer without discussing the details of your move, but Wirks Moving & Storage strives to deliver affordable moving rates that fit your budget. To give you a free moving estimate, we will ask questions like:

We will work with you to adjust factors within your control and help you get the moving help you need at a price you can afford.

Your belongings have been packed and loaded and the moving truck is on its way to your new home. How will you get from Atlanta to Orlando with your family?

Ready to see first-hand what life is like living in Orlando? Our friendly Atlanta to Orlando movers at Wirks Moving & Storage are here to help. Request your free moving estimate today so we can help you complete your long-distance move without the stress. 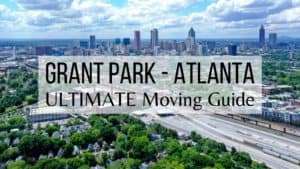 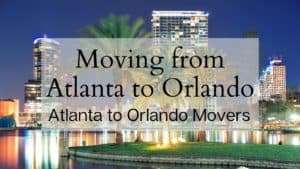 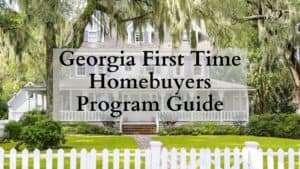