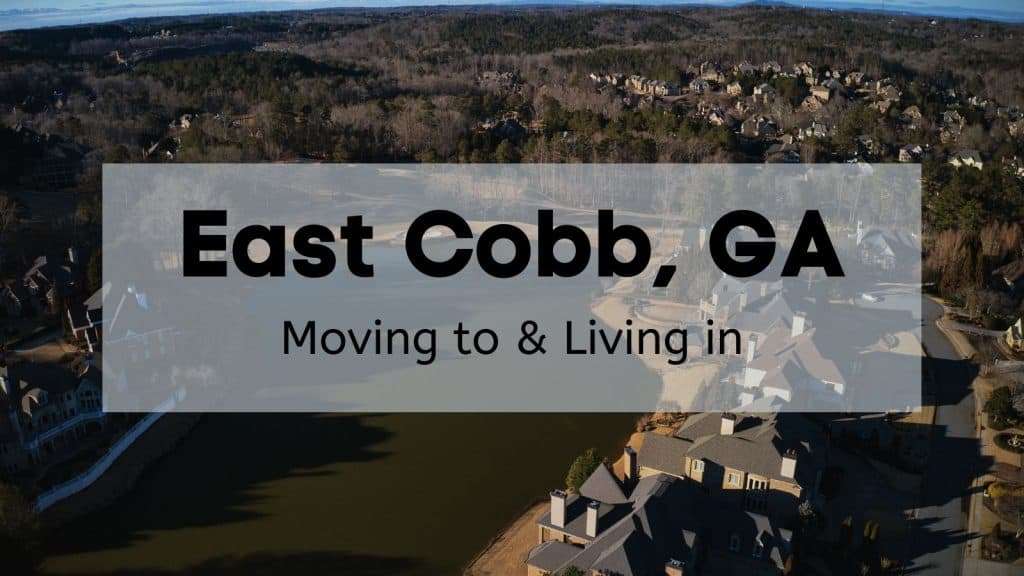 East Cobb is a large unincorporated suburban community located in Cobb County, north-west of Atlanta, Georgia, and neighboring the communities of Roswell, Marietta, and Brookhaven. East Cobb is divided between five zip codes, all of which contain tens of thousands of people, and all of which generally fall under Marietta addresses, as the community is generally listed as part of Marietta. The fact that such a large community is unincorporated is unusual, especially since the rest of the suburban cities have been incorporated for some time. Regardless, East Cobb is known for being an affluent and lovely sister (unofficial) city to Atlanta, with fantastic schools, great attractions and restaurants, excellent neighborhoods, and more!

Part of the reason East Cobb is not incorporated is because of its relative youth compared to the rest of the Atlanta metropolitan area. East Cobb got its start as a bunch of developments in the 1960s, specifically built for the purpose of making a new suburb for Atlanta. The development was a big success, with the population rapidly growing since that time.

Since then, East Cobb has quietly served as an unofficial extension of Marietta, but more than a few people have tried to get East Cobb incorporated as its own city. In 1998, a local representative named Matt Dollar tried to submit a bill to the Georgia House of Representatives incorporating East Cobb, but it was ultimately shot down. A similar bill was submitted in 2019, which as of 2022 still has not been decided upon. However, no matter what East Cobb’s status is, we’re sure you’ll love living in East Cobb!

The two ethnic majorities in East Cobb demographically (using data for zip code 80062) are White, at 69%, Black, at 16%, and Asian, at 8%. Different portions of this unincorporated community have different ratios, but generally adhere to this numerical order. 14.9% of East Cobb’s population are foreign-born, with 50% of the foreign-born population coming from Asia. East Cobb’s gender ratio is split even between men and women, at an exact 50%.

As East Cobb is an unincorporated community, finding solid statistics and demographics on it is more difficult than usual – be aware that there’ll be a lot of guesswork when it comes to the demographics of the community!

Don’t let East Cobb’s crime statistics dissuade you from moving to East Cobb. Taking the geography of the area into account, you’ll find that most of the most crime-ridden areas in Marietta are down south, well away from East Cobb. East Cobb is served in law enforcement matters by the Cobb County Police Precinct, staffed by 180 police officers.

The cost of living index in the Atlanta-Sandy Springs-Alpharetta GA Metro is 5% higher on average than other places in America, and East Cobb’s general affluence will shift that cost of living a bit higher.

According to Payscale (using data for Marietta), basic everyday costs like housing, utilities, and groceries will vary, with utilities and groceries being slightly more expensive than the average, while housing and transportation are curiously lower than the average. The average utility bill in East Cobb is $177.55 per month.

Here are some common items you might buy, and their prices according to Numbeo:

Being a rather out there suburb, you shouldn’t plan to rely on public transportation too much. Nonetheless, getting around East Cobb is easy! Marietta and the surrounding areas are laced through by Interstate 75 and U.S. 41. Additionally, buses are furnished by both CobbLinc and Xpress GA, if you need to fall back on public transportation. While there were trains running through Marietta, they’ve been decommissioned since the 1970s. The average commute to work for an East Cobb resident is 26 minutes.

If you choose to start living in East Cobb, you’ll be served by the Cobb County School District. This school district is why many parents choose to move here – 43% of their schools are rated “Above Average” by GreatSchools, and many have won awards! Within and around East Cobb, you’ll find no lack of excellent schools to attend. Notable ones include Mountain View Elementary, Hightower Trail Middle School, and Lassiter High – all with top marks!

If you or a family member are looking to get into higher education, you’ll probably be better off looking in Atlanta than around East Cobb or Marietta. However, there are a few, specialized options – for instance, the Life University which focuses on training chiropractors, and the Chattahoochee Technical College which specializes in trades.

Georgia is fairly typical for the South. Hot, humid, rainy, and seeing a snowflake all year is relatively rare, although this area does get some snow. You can expect lows of 31 degrees Fahrenheit during the winter months, and highs of 88 degrees Fahrenheit during the summer months. East Cobb experiences much more than the average amount of rainfall when compared with the rest of the United States, with 53 inches per year as compared to 38. On the other hand, East Cobb only experiences 2 inches of snow annually. The best times to visit East Cobb, in terms of comfort rating, are May and September. The coldest month is January.

East Cobb, like all of this area of the South, will experience hurricanes and other severe tropical storms with regularity. Be sure to prepare accordingly if you move to East Cobb.

The most important division in East Cobb are the five zip codes that are considered as part of it. 30062, which stretches across East Cobb’s center, has the middle-of-the-road average home price of $350,100, for instance. The most affluent zip code is 30068, which has a median property price of $432,100, and is set in East Cobb’s south.

The southernmost portion of East Cobb, taken up by 30067, has a median home price of $371,300. However, it is also the area with the lowest median income, so it is generally considered the more affordable area.

East Cobb gets a 72 on Redfin’s competitiveness scale, with home sale prices on the rise and a majority of homes being sold over list price. While not as competitive as some other nearby areas, the real estate market in East Cobb is still hot, and with such a lovely community, it makes sense!

The median sale price for East Cobb homes is $350,100, which is priced significantly higher than the average home price for the Atlanta metropolitan area ($233,700) and the entire state of Georgia ($190,200). The number of houses sold yearly has depressed, by over 20% year over year, with 925 homes being sold this year. The median days on the market in this area is 11 days, and that number has been decreasing year by year!

43% of East Cobb residents rent their homes, according to RentCafe (using data for Marietta), which is what one might expect for an affluent area near a big city. The average rent for an apartment in East Cobb is $1,589 monthly, which is lower than the Atlanta average of $1,812.

If you want to make yourself a part of any of these communities, you should check out the latest listings for homes for sale in East Cobb, GA.

East Cobb is a city whose main industries pertain to tech, engineering, and management, according to Payscale (using data for Marietta). The most popular positions of employment are Project Manager, Operations Manager, and Software Engineer. The largest employers in the area, and by extension the best places to work in East Cobb, are WellStar Health System, AJC International, and Lockheed Martin Aeronautics Company. The average salary for a worker in East Cobb is $66k a year, while the average hourly wage is $17.84.

Don’t limit yourself! With the sheer number of prosperous suburbs in the area, as well as Atlanta only a short distance away, there are job opportunities abound in this area! Check out the latest listings for jobs in East Cobb, GA here.

Things to Do in East Cobb, GA

Even if it’s not in any US census, there’s still plenty of attractions to visit and shopping to be done in East Cobb! You should check out some of the best things to do in East Cobb, GA below:

In East Cobb, fantastic restaurants are common! You’ll be stunned at the options you have. Check out some below:

A small, local chain of sports bars, Marlow’s Tavern is the perfect spot for some R&R after a long day of work, or a night out with the guys or gals to see the big game. It helps that the dishes and drinks here are excellent!

Sleekly designed and modern in every sense of the word, Seed Kitchen & Bar is the sort of upper-crust bar you’d expect out of Marietta’s more affluent areas. Priding themselves on varied and inventive dishes, anything you try here is sure to be interesting!

You’ll find that people in East Cobb love their sports bars, although Suburban Tap is quite different from the rest. They pride themselves on having a varied list of beers – over 100, to be exact! And there’s plenty of other things to do here, like trivia nights and bingo!

If you’re looking for professional sports activities, like big stadiums or local teams, within East Cobb, you’re probably going to be disappointed. That being said, Cobb County has plenty of facilities for both youth and adult athletics. If you’re willing to broaden your geographical horizons a bit, nearby Atlanta is the absolute king of sports in Georgia. With famous city teams in the dozens, and massive stadiums like the Truist Park and the Mercedes Benz Stadium, Atlanta has got any sports fan covered.

Interested in living in East Cobb, Georgia? Moving to East Cobb will probably be one of the best choices you make! If you need your relocation to go as smoothly as possible, give Wirks Moving a call at (404) 635-6683! With our group of trained and professional East Cobb movers, we can handle any sort of moving situation you throw at us! Call now or fill out our online form for a free quote! 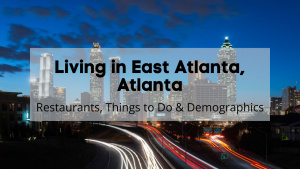 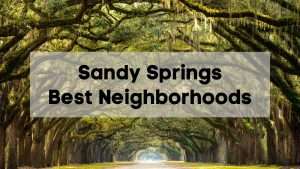 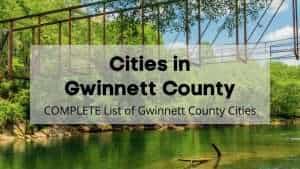