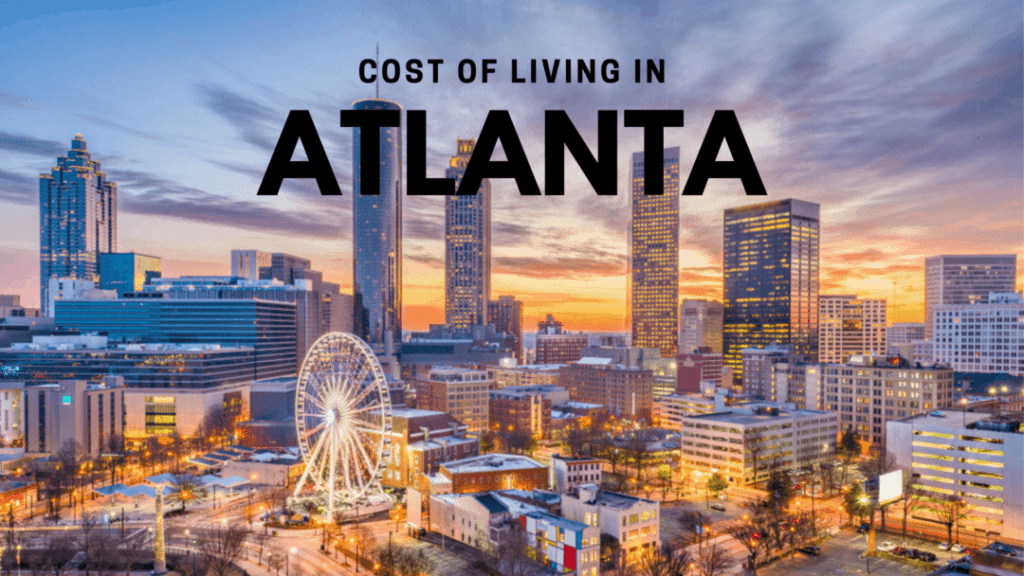 Cost of Living in Atlanta: What You Need to Know

Home to America’s favorite soft drink, a massive aquarium, and a handful of successful athletic organizations, Atlanta is about as diverse as you can get within the states. A location where many events of the Civil Rights Movement took place, multiple museums recognize this city as a major part of its success.

The capital of Georgia is an active city with its own unique level of southern flair. The general area, including parts like Dunwoody and Brookhaven, has a population of around 5.5 million, while metropolitan Atlanta alone is home to about 470,000 people.

For those thinking about heading to this fun city, we’ve put together a list of Atlanta cost of living statistics. Ranking 30th in the U.S. in this category, there are a few things to consider as you make your preparations.

Are you planning on moving to the area? Before you pack up your home and relocate, let’s take a look at the cost of living in Atlanta.

Many people prefer purchasing their own homes in this city, with about 43% of homes being owner occupied. The median listing price in Atlanta is $324,900. Currently a hot market, it has jumped up 13% in the last twelve months and is expected to rise nearly another 8% in the next year.

Current home prices have made it more of a market for previous home buyers, leaving young students and couples to rent for a period before making their first purchase. This will be a significant factor to examine when looking at the cost of living in Atlanta.

Even with this new mindset, the housing market is healthy and shows a limited amount of negative equity across the board. The Atlanta cost of living index for housing is just a few points above the average in the U.S., making it a great place to buy a house for those planning a move to the south.

Cost of Renting in Atlanta

If you’re not ready to enter the buyer’s market quite yet, you still have plenty of rental options available when living in Atlanta. You can get a furnished 900 square foot apartment in the city for about $1,776 per month, making the average rent in Atlanta a bit higher than the national average.

The number drops down to $1,199 if you head further out to the edge of town. If you are looking for something a bit smaller, you can also find a 480 square foot furnished studio apartment for about $806 per month.

Though the average rent in Atlanta is higher than the U.S. average, it is still a reasonable option when compared to other large cities in the country.

As we all know, the cost of utilities comes whether you buy a home or rent an apartment. An average utility bill in Atlanta is nearly identical to the national average, hovering around $170 per month. To add the now household staple of home Wi-Fi, you’ll be looking to pay around $60 on top of your usual utilities.

If you’re not a fan of cleaning up after yourself, the average hourly rate for housework help is $22. Though it may not be considered a utility, childcare is another common cost you’ll need to review in your Atlanta cost of living. Full day childcare costs around $860 per month for one child, with many preschool programs offering discounts for enrolling more than one child.

Transportation Cost of Living in Atlanta

Transportation is often the second highest expense for most Americans after their housing. Atlanta is no exception, with nearly 90% of commuters driving their own vehicle. When considering the cost of living in Atlanta, you’ll also want to take a close look at the higher commute times that can add to your transportation expenses.

The cost of transportation is about 4% higher than the average in America. For car owners, these transportation costs include the price of insurance, standard maintenance, gasoline, and parking fees.

Public transit users also pay higher than average rates, with a 30-day Metropolitan Atlanta Rapid Transit Authority (MARTA) pass costing up to $95. This includes use of the rail stations, but that may not be enough to get you where you’re going. Most train commuters still end up needing to catch a taxi for the remaining commute from the station, which can cost up to $20 for a 5-mile ride.

People that live in metro Atlanta areas deal with heavy traffic on a daily basis as opposed to those already living in city center. Gas prices are also a bit higher in the area when compared to other states in the south. It is recommended you review your anticipated transportation costs before moving to Atlanta.

We all need to eat, and Atlanta is happy to provide a great lineup of good-for-the-soul Southern cooking. While it’s nice to splurge on lobster and filet mignon every now and then, most of us are looking for great value to go along with what’s on the plate.

As with any other city or state, you’ll find your fair share of common fast food restaurants. Their prices are typically the same across the country, with a McDonald’s Big Mac meal or something similar, costing around $7.50.

But if you’re looking for something new, there are plenty of options beyond the standard chains. For some great barbecue, go visit Fat Matt’s Rib Shack. Or if you’re in the mood for authentic Mexican cuisine, then hop in line at Taqueria del Sol for some delicious tacos and margaritas. When you’re ready some good old-fashioned southern hospitality and food, head over to Empire State South.

Most dine-in restaurants in the area will feed two people for an average total of about $50. This is normal for bistros, cafes, and other places to eat across the U.S.

You’ll find some groceries in Atlanta are a bit higher than the average such as $3.20 for a gallon of milk, $2.45 for a loaf of bread, and up to $2.25 per pound of produce like apples. But these costs tend to be balanced out with other foods like rice, eggs, and cheese falling below the national average.

Suggested Salary to Live in Atlanta

To cover the cost of living in Atlanta, you’ll need to make sure you’re bringing in enough money as well. While wages always range from place to place, certain areas will require a higher income than others. As a starting point, it is recommended you make a minimum $46,800 salary to live in Atlanta.

But it would be more ideal for you to have a salary closer to $64,000 per year, which is the average income in Atlanta. This will set you up for a higher level of success in this city and ensure you are able to keep up with all your Atlanta living expenses.

If the cost of living in Atlanta is within your means and you’re ready to start your move, please feel free to contact Wirks Moving & Storage for a free moving quote. Our team of Atlanta professional movers can help you get packed, loaded up, and delivered to your new Georgia home.